Ces Drilon joins SONA 2020 protest: ‘We are victims of an oppressive government’ 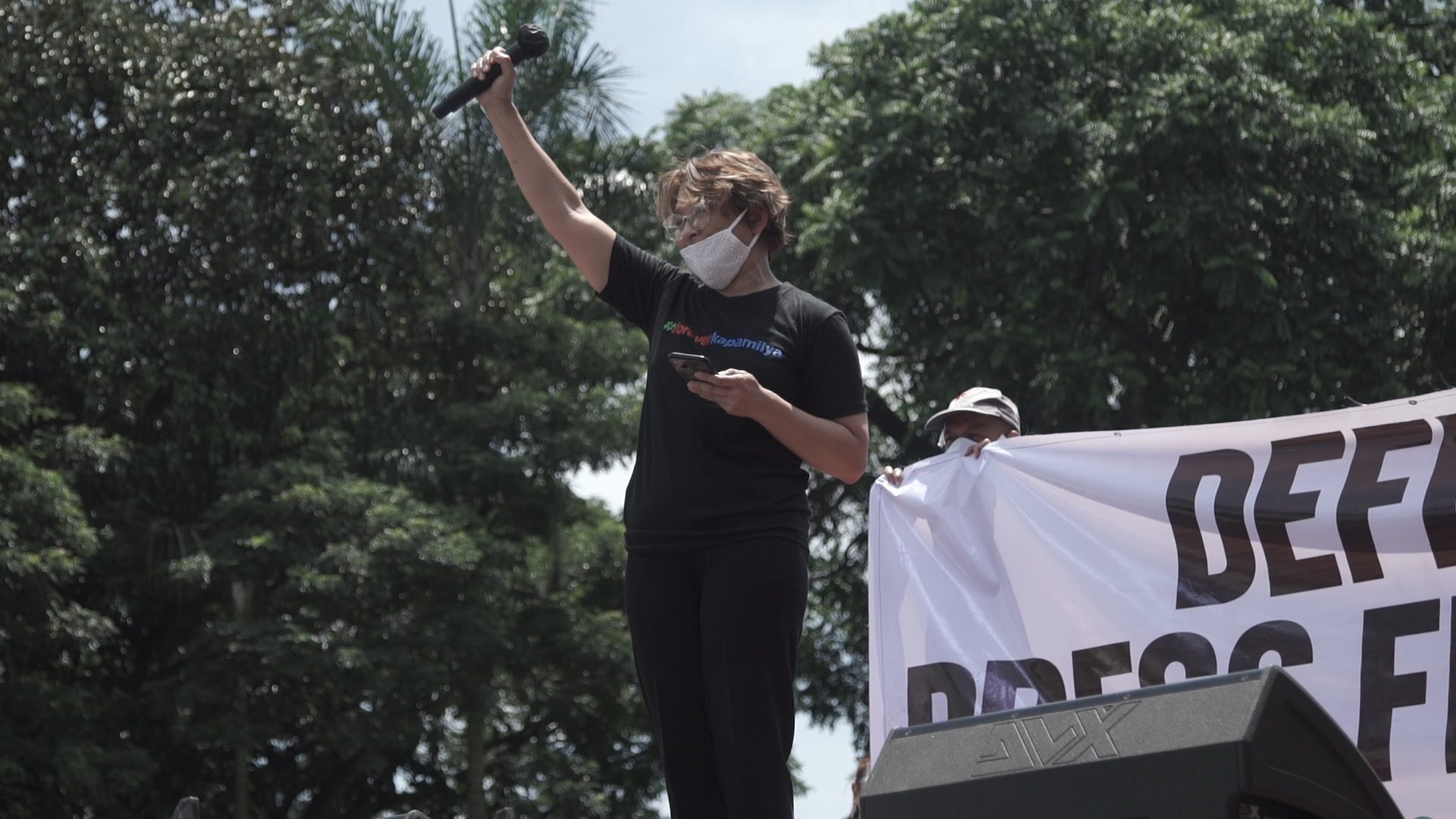 ABS-CBN veteran broadcast journalist Ces Drilon on Monday, July 27, joined a protest ahead of President Rodrigo Duterte’s 5th State of the Nation Address, where she called out the “oppressive government” responsible for her media network’s closure.

“Ayaw lang po ng isang tao ang pagbabalita namin at dahil dito hindi kami nabigyan ng prangkisa (We were not granted our franchise just because one person did not like our way of reporting),” Drilon told the crowd at the University of the Philippines Diliman.

(I am not a spokesperson for ABS-CBN or for my fellow employees but I am one with them in saying that we are victims of an oppressive administration.)

She said it was her first time to stand up in front of a crowd to defend press freedom in the country, which is under threat by the Duterte administration.

“Ang freedom of the press ay haligi ng ating demokrasya – karapatan ng bawat isang Pilipino at hindi isang pribilehiyo na tatanggal-tanggalin lamang ng Presidente (Freedom of the press is one of the pillars of democracy – the right of every Filipino and not a privilege that can just be unilaterally removed by the President),” Drilon said.

Drilon called on the public to speak up as she cited government attacks on the media and its crackdown on dissent.

Aside from ABS-CBN, she mentioned the cases filed against Rappler and that of salesman Reynaldo Orcullo, who was arrested for criticizing Duterte online.

(When Rappler was attacked, we didn’t speak out. Our reason was we are not journalists. When they arrested Reynaldo Orcullo, our reason was we do not post on social media.)

“Nang isara ang ABS-CBN at DZMM, hindi tayo umimik, katwiran mo ‘di naman ako empleyado ng ABS-CBN. ‘Pag hinabol nila Inquirer, ‘di pa ba tayo iimik (When ABS-CBN and dzMM were shut down, you did not speak out because you said you’re not their employee. If they run after Inquirer, will we still keep silent)?” Drilon added.

Duterte has also repeatedly publicly attacked the Philippine Daily Inquirer early in his term, and even threatened to “expose” its owners.

“Kapag ikaw na ang habulin? Sino na magsasalita at magtatanggol sa iyo) What if they run after you next? Who will speak up for you and defend you)?” Drilon said.

She called on the public to uphold press freedom and ignore “lies” spread online about the ABS-CBN closure, specifically repeated government claims that the shutdown is not a blow on press freedom in the country.

(Let us not believe what they say on social media that ABS-CBN’s closure does not violate our right to a free press. Defend press freedom.)

Drilon is among the first workers laid off by ABS-CBN  following the non-renewal of the network’s legislative franchise. (READ: With no franchise, ABS-CBN cuts jobs) – Rappler.com