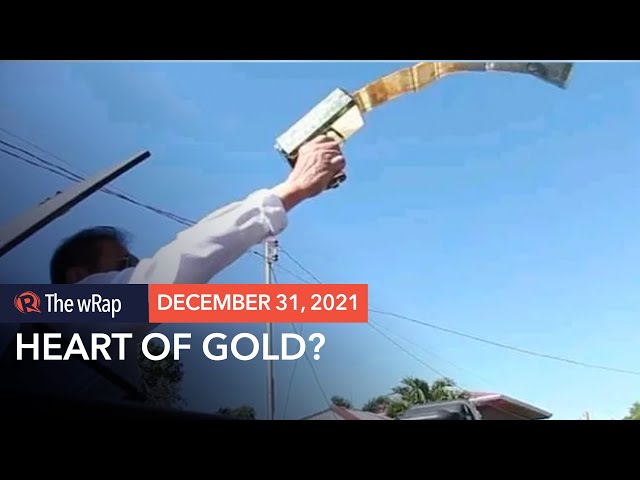 LAOAG CITY, Philippines – Ilocos Sur’s political kingpin and Narvacan Mayor Luis “Chavit” Singson leaves 2021 as an internet sensation with “a heart of gold” – or, to social media critics, an irresponsible politician oblivious to the dangers of COVID-19.

Singson’s Facebook page rolled out on Tuesday, December 28, a 43-second video of him shooting” out P500 and P1,000 bills from a gold toy gun.

The viral post, which had attracted more than 3 million views and 79,000 reactions by Friday, December 31, shows a maskless Singson grinning as constituents, also mostly without masks, reach up to grab money flying over their heads or scramble on the ground for bills.

A portion of the video also shows Singson arising from the sunroof of his black Hummer, shooting out a ribbon of cash, and some residents using poles to reach money that had landed on their roofs.

The 80-year-old Singson told ABS-CBN on December 30 that he had made similar gestures several times in the past, during gatherings and fiesta celebrations, and not only during the Christmas season.

Since he started his political career, constituents have come to expect his giveaways, the mayor pointed out.

Foreign Secretary Teodoro Locsin Jr. described Singson in a tweet on Friday as someone who has “a heart of gold for the poor.”

This was not the first time that Singson went viral on social media for giving out money to the public.

When he ran as Narvacan mayor in 2019, Singson was caught on camera holding the same gold toy gun, showering people at the town market with cash as “balato” (gift) to celebrate a boxing victory by Senator Manny Pacquiao.

While many were amused and grateful, some netizens slammed the gesture as “demeaning” and “insulting” to his supporters.

“Give it with respect and dignity to people, mahirap na kami ginagawa ‘nyo pang laruan,” a netizen said.

“[This shows] poor people fighting over money for the entertainment of the rich,” another netizen commented.

Others slammed the post for the disregard of COVID-19 protocols.

But Singson clapped back at those who called him out, calling them envious.

“Kung saan man sila naroroon, gusto ko silang pasyalan at gawin ko rin sa kanila para masaya sila,” he said. (Wherever they are, I want to visit them to give them the same happiness.)

Reacting to comments about the ongoing COVID-19 pandemic, Singson noted that the COVID-19 situation in the province has improved.

Latest data from the Ilocos Sur provincial government, dated December 21 but posted on its social media page on December 23, showed 38 active COVID-19 cases, with Narvacan having one active case.

Macatiag insisted that Singson’s actions carried no tint of politics as he  is not contesting any local or national post in the 2022 elections.

Singson has no intention to disrespect residents, she added.

“It is just for the sake of having fun, all from his personal money,” Macatiag said, adding that Singson’s businesses are “doing very well.” – Rappler.com