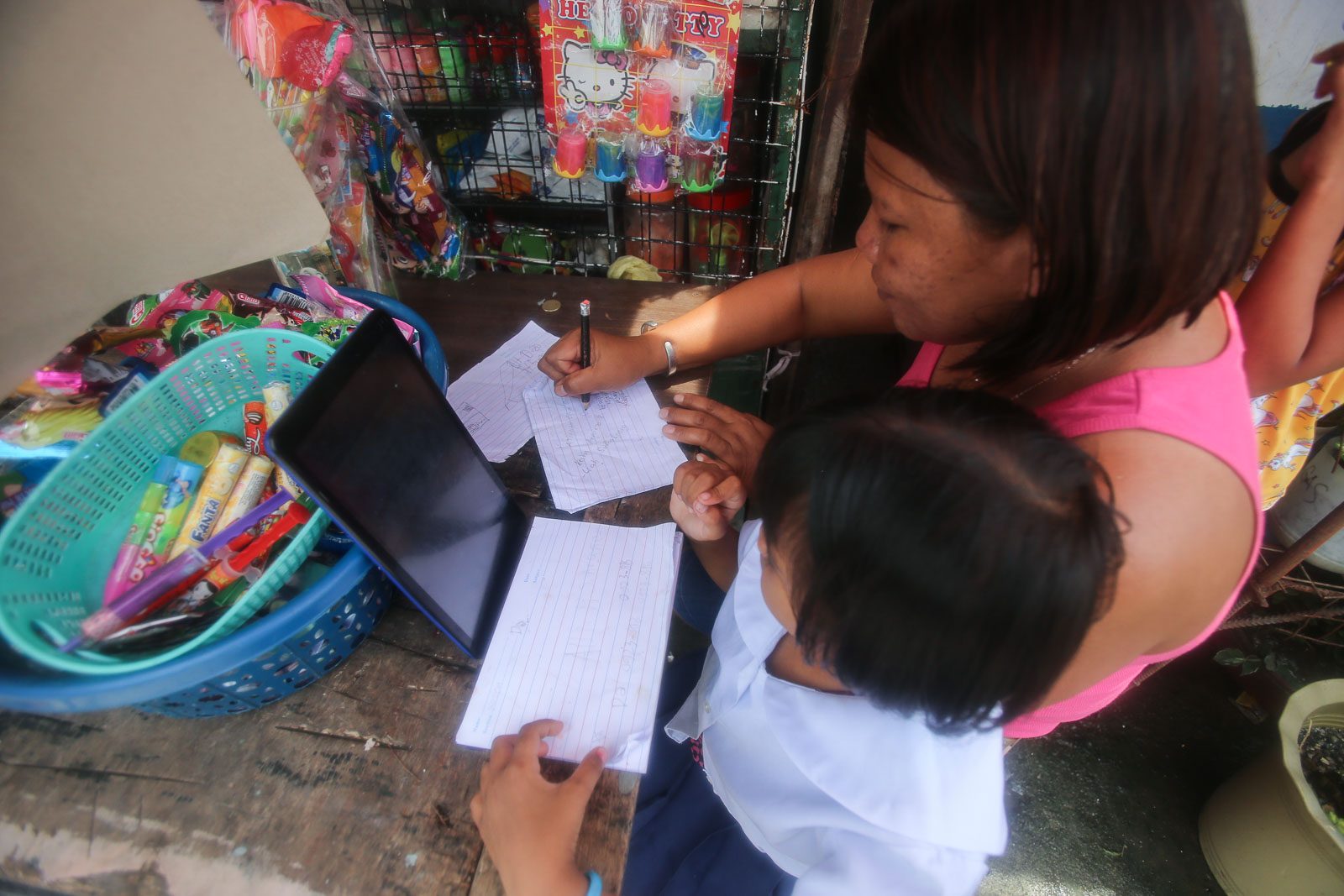 FILE PHOTO. Mother and daughter during the an online class and while tending their sari-sari store in Baseco Compound in Tondo, Manila on the opening day of SY 2021-2022. Rappler

In the COA report released Monday, May 30, state auditors said they found out that a big majority of  the provincial local school board (PLSB) instructors  hired by the Nueva Ecija provincial government that year were not licensed teachers.

The report also questioned Nueva Ecija’s  procurement of P18.205 million worth of self-learning modules (SLM) for the first quarter of school year 2021-2022 for Grades 4 to 12 learners. The modules were only delivered near the end of the academic period.

Modules were vital tools during the two previous academic years which were limited to online learning due to the persisting COVID-19 pandemic.

Unlicensed teachers and other lapses

The COA report said: “Review of the personal data sheet of existing PLSB teachers disclosed that 45 out of 110 or 41 percent only were LET (Licensure Exam for Teachers) passers.” the COA.

The PLSB operations manual specifically stated that “only LET (Licensure Exam for Teachers) passers are allowed to become PLSB teachers.”

The only exceptions to this rule are those who would be assigned to indigenous people’s (IP) communities where licensed teachers are rare, and those who handle lectures for non-formal education of out-of-school youth.

The COA said students of public elementary and secondary schools in the province were denied the chance to quality basic education under qualified and licensed educators, a basic requirement by the national government.

The government auditors also noted other violations by Nueva Ecija regarding this hiring.

It questioned why the provincial government hired instructors when the NE DepEd Schools Division Office reported that all 570 newly created items for teaching positions from 2019 to 2021 “were completely filled-out.”

The provincial government tapped the Special Education Fund (SEF) to hire new teachers. However, COA noted that the DepEd-DBM-DILG joint circular was clear that using the SEF may be allowed only when the DepEd reports that there was a shortage of teachers.

Another policy sidestepped  was the rule that hiring of new teachers should be based on DepEd’s Registry of Qualified Applicants (RQA).

State auditors also inquired with the lead overall of the PLSB hiring. It was revealed that the applicants did not undergo the screening provided by the operations manual. Instead, it was left “on the discretion of the district supervisor” to hire unlicensed teachers.

“This is a complete defiance of the Joint Circular and the Manual as the selection and designation are within the exclusive authority of the LSB as a collegiate body, and not for an officer alone,” said the auditors.

When told about the audit findings, the PLSB said that it “may have overlooked the prescribed qualification standards and procedures on the hiring of teachers.”

It assured the COA that, in the future, the screening and selection procedures would be complied with.

COA found out though the self-learning modules procured by the Nueva Ecija provincial government were delivered and inspected only on October 21. This means there were just two weeks left in the first quarter of the school year.

“The distribution of modules to the students would be useless as they could not utilize them alongside with other lessons for the said quarter. Therefore, the timing of the procurement was not in harmony with the season of necessity; rendering the purpose not served, indicative of ineffective use of fund,” COA said. – Rappler.com