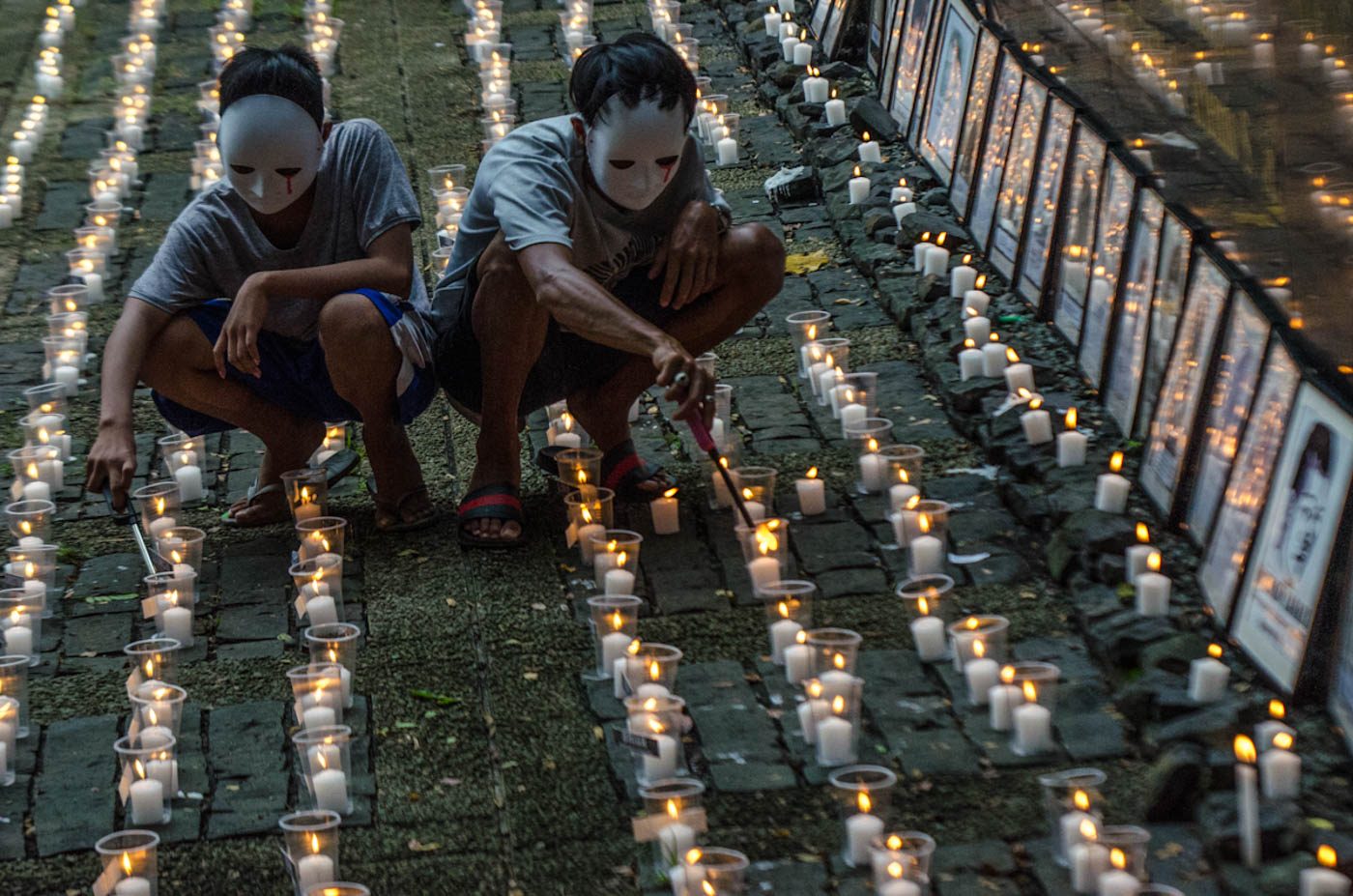 JUSTICE. Families of drug war victims light candles for their loved ones.

MANILA, Philippines – The Commission on Human Rights (CHR) urged the Department of Justice (DOJ) and the Philippine National Police (PNP) to be more transparent and disclose their findings in their respective reviews of and investigations into the killings under President Rodrigo Duterte’s war on drugs.

In a recently published report, the commission said that the PNP should release a “comprehensive report” that would detail the number of investigations it conducted into the killings, as well as the outcomes of these probes, since Duterte assumed office in July 2016.

It also urged the PNP’s Human Rights Affairs Office to come up with a bi-annual report that would highlight the investigations into violations committed by state agents. The report, CHR pointed out, should “include updates on the legal processes undertaken by the office against these violators.”

“These reports should be made accessible to the public, provided that such access would not interfere with any pending investigation or litigation,” CHR said in the report dated April 2022, but released in May.

Meanwhile, the commission urged the DOJ to “regularly and automatically” furnish the CHR with “complete and comprehensive reports” from the much-touted inter-agency drug war review panel.

DOJ leads the panel – composed of different government agencies – that sought to review drug war killings. Justice Secretary Menardo Guevarra announced its creation in June 2020, but human rights groups said it was a way for government to evade scrutiny by independent bodies, such as the International Criminal Court (ICC) and the United Nations Human Rights Council.

While the panel announced that its review found cases where police failed to follow protocols, there has been no significant development on the effort so far. The call for transparency and further cooperation comes as CHR itself continues to be sidelined in the drug war review panel, despite the DOJ’s earlier assurance to the UN that the the commission “will be involved as an independent monitoring body.” Then-commissioners in 2021 recalled to Rappler unanswered letters, where they “respectfully, diligently, consistently, and repeatedly asked the DOJ” about the CHR’s role and other concerns in the panel.

CHR’s experience with the drug war panel also reflects the government’s general treatment of the commission, which has consistently condemned the bloody war on drugs that so far reached 6,241 victims in police operations alone as of March 31. This number does not include victims of vigilante-style killings, which human rights groups estimate to be between 27,000 and 30,000.

In the same report, CHR detailed how its independent investigations into the killings were stonewalled by government agencies, adding that their “subpoenas and requests for submission of documents were oftentimes refused, denied, or ignored” even if they followed guidelines and directives in obtaining information.

“The commission finds that the government has not only failed in its obligation to respect and protect the human rights of every citizen, in particular, victims of drug-related killings, but it has also encouraged a culture of impunity that shields perpetrators from being held to account,” it said.

The latest report is an addition to previously-released information from the CHR, including findings that only 11 survived police shootouts in 466 “nanlaban” cases it analyzed, aside from several patterns of discrepancies between police reports and account witnesses, and indications of possible abuse of strength and intent to kill in the injuries of victims. – Rappler.com