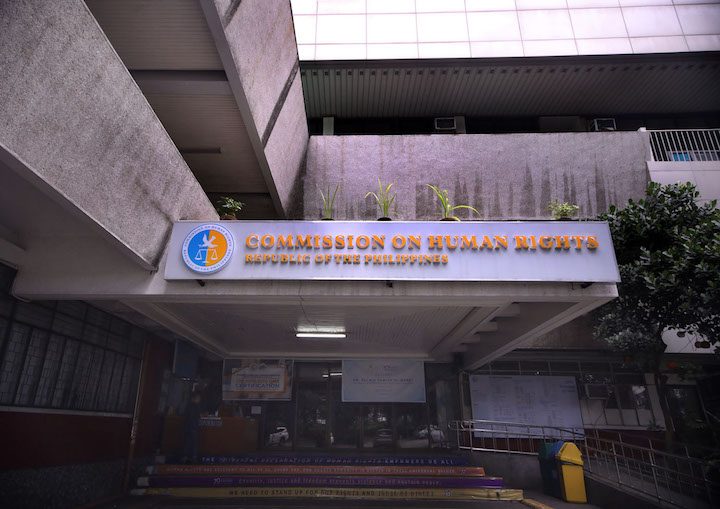 MORE FUNDING. The Commission on Human Rights calls for a budget increase for 2022.

Facebook Twitter Copy URL
Copied
'With the support of Congress and provision of sufficient resources, hopefully we will be able to meet fully the need and the demand of the current moment,' CHR Chairperson Chito Gascon says

The Commission on Human Rights (CHR) is seeking an increase in its proposed 2022 budget to further strengthen efforts to prevent and investigate abuses in the Philippines, including those under President Rodrigo Duterte’s war on drugs.

CHR Chairperson Chito Gascon on Thursday, September 16, said that “there are significant reductions” in their operations even if the overall proposed budget for 2022 increased.

“With the support of Congress and provision of sufficient resources, hopefully we will be able to meet fully the need and the demand of the current moment,” he told the House appropriations panel.

The National Expenditure Program submitted to Congress by the Department of Budget and Management allotted P867,251,000 for the CHR in 2022 – P747 million less than the commission’s proposed P1.6 billion.

“If you could, please take a look at this and at the very least, maintain us at the current levels so that we can continue our operations, or even better, to augment further so we can do more,” Gascon added.

The CHR is on the frontlines in investigating President Rodrigo Duterte’s violent war on drugs, even as it continues to face the noncooperation of law enforcement agencies.

Aside from often being sidelined by the Department of Justice, the commission also suffers from lack of resources, including manpower, which proves to be challenging when it comes to probing incidents.

The CHR says it has documented and investigated 3,423 drug-related extrajudicial killings from 2016 to August 31, 2021.

(Budget is very critical for us, and if this could be guaranteed and possibly increased, we would be able to increase our caseload from 3,000 cases to 4,000 or 5,000 over time, so therefore we are able to do more.)

Members of the House appropriations panel supported the calls for additional budget for the CHR, adding that this would be taken up in plenary.

Kabataan Representative Sarah Elago emphasized the important role of the CHR in investigating killings in the country. (READ: In Duterte’s drug war, justice is ‘nearly impossible’)

“This challenge and situation highlight the need for House members to heed the call of CHR to not only restore but fully support additional budget,” she said.

Duterte’s bloody anti-illegal drugs campaign has killed at least 6,181 suspected drug personalities in police operations alone as of July 31. Human rights groups estimate the deaths to be between 27,000 to 30,000 to include victims of extrajudicial killings. (READ: The Impunity Series)

The International Criminal Court on Wednesday night, September 15, announced that it had authorized a full investigation into the Philippine situation under Duterte, including the killings in Davao City from 2011. – Rappler.com