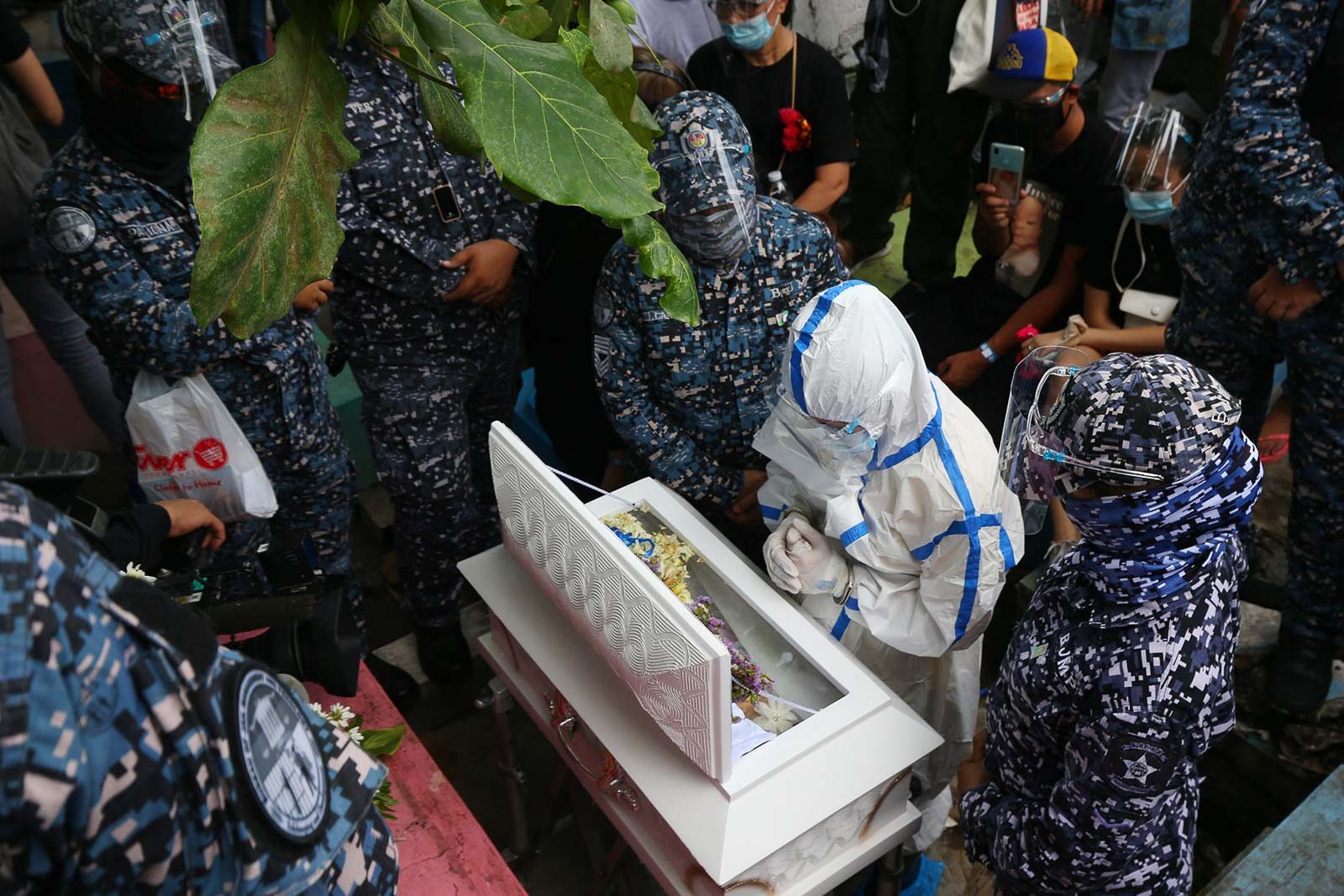 A MOTHER'S GRIEF. Detained political activist Reina Mae Nasino, escorted by jail guards and police, pays her last respects as she attends the burial of her 3-month old daughter River at the Manila North Cemetery on October 16, 2020.

Facebook Twitter Copy URL
Copied
The Court of Appeals says the search warrants issued in 2019 that led to the arrest of three activists failed to meet standards, deeming all recovered evidence as inadmissible 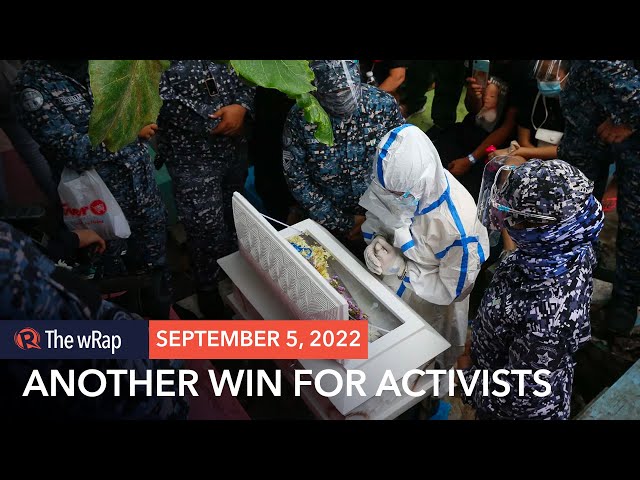 MANILA, Philippines – The Court of Appeals (CA) has voided another set of search warrants issued by a Quezon City Regional Trial Court (RTC) judge against activists Reina Mae Nasino, Ram Carlo Bautista, and Alma Moran – the latest in a series of wins by activists arrested as part of former president Rodrigo Duterte’s crackdown on dissent.

In a decision dated August 31, the CA’s 12th Division said the warrants issued by Quezon City RTC Branch 89 Executive Judge Cecilyn Burgos Villavert against Nasino, Bautista, and Moran in 2019 failed “to meet the standards of a valid search warrant, and all evidence procured by virtue thereof are deemed inadmissible.”

The three were arrested during a search of the office of progressive group Bayan past midnight of November 5, 2019, and charged with possession of illegal firearms and explosives, which they claimed were planted by police.

Nasino’s case gripped the nation when she gave birth to her daughter River while in jail during the pandemic, putting the pressure on courts – all the way to the Supreme Court – to apply humanitarian considerations during an unprecedented time.

River later died at 3 months old. The infant’s tragic death was seen as a case of a victim who fell through the cracks of the Philippine justice system.

Nasino was only given a three-hour furlough by the court to say goodbye to her deceased child. She attended River’s burial in October 2020 in handcuffs and surrounded by cops wielding high-powered firearms. At least 43 personnel, including police, were deployed for the burial.

The actual search was also conducted at a different address, and the barangay officials present were not from the same barangay stated in the warrants.

“Obviously, the uncertainty and confusion are not confined in the documents forming part of the record of the application for the subject search warrants and which were the bases of the issuing judge, but also in the actual implementation of the said search warrants,” the court said.

“These apparent irregularities in the application and implementation of the subject search warrants are more than enough to debunk the presumption of regularity of performance of official duties,” it added.

The search was conducted not even a week after law enforcers arrested more than 50 people affiliated with progressive and human rights groups during a series of raids in Bacolod City. (READ: Crackdown? Same QC judge issues search warrants vs activists in Manila, Bacolod)

Baby River, who died in ‘cracks’ of justice system, laid to rest under tight police watch

Aside from the addresses, the court also pointed out other irregularities in the implementation of the search warrants.

These include the absence of Bautista while officers were searching his room, as well as the treatment of Moran and Nasino, who were both “hand-tied and made to lie face down during the search in their rooms.”

“Clearly, petitioners’ right against unreasonable search and seizures was blatantly trampled upon,” the decision said.

The CA decision did not specify if the ongoing cases against the three in the trial court would now be dismissed. It is expected for Nasino’s lawyers to use this victory to move the trial court to dismiss the case.

The CA decision is the latest win by activists in Duterte’s crackdown on dissent. By Rappler’s tally, 14 search warrants issued by Villavert have been voided by courts since January 2021. Overall, at least 30 warrants against activists have been voided during the same period.

Activists and human rights defenders were harassed and targeted both online and on the ground under the guise of Duterte’s crackdown on communist insurgency. At least 1,161 activists were arrested and detained between July 2016 and December 2021, according to data from rights group Karapatan.

The group also documented 427 incidents of killings since July 2016 and at least 537 recorded cases of frustrated killings. – with reports from Lian Buan and Jairo Bolledo/Rappler.com