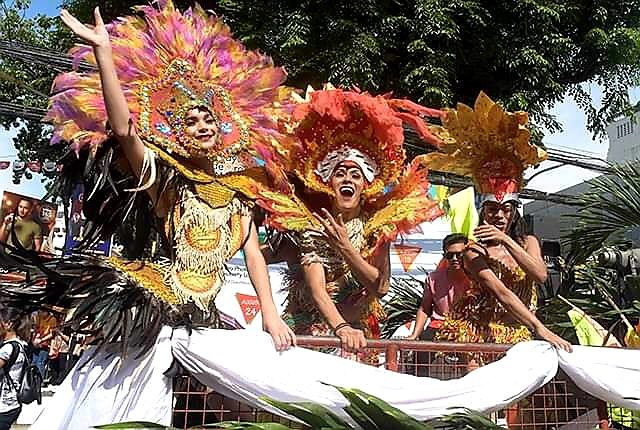 Facebook Twitter Copy URL
Copied
In August 2019, the month of the last fiesta the city had before the pandemic, thousands took part in the traditional civic-military parade in downtown Cagayan de Oro. Not in 2021.

Just months before the world documented its first COVID-19 case, Cagayan de Oro celebrated its annual fiesta with one of its merriest street parades in recent years and a record-breaking crowd. The City of Golden Friendship will have nothing of that this weekend.

There are no colorful buntings around the Divisoria park, across the old Apolinar Velez Street, and along the kilometer-long, four-lane Maharlika Bridge across the Cagayan River.

The busy bridge, the city’s longest, stands undecorated against the backdrop of giant billboards that include one that admonishes people to stay home, and a hotdog ad standing side by side another one of those shameless “Run, Sara, Run” eyesores.

For the first time in years, no new Miss Cagayan de Oro will be waving at a cheering crowd of well-wishers on the city streets from a parade float of flowers on Friday, August 27, the day before the fiesta.

There has never been a beauty-and-brains competition in the city this year in the first place, and there will be no float parade to speak of on the morning before the August 28 Feast of Señor San Agustin, the patron saint of this predominantly Catholic city.

The instruments of marching bands will be silent, and there will be no street dancing and pyrotechnics show.

No barangay or group is preparing an entry to the annual fluvial procession and boat race seen yearly from the banks of Cagayan River because, like the Higalaay street parade, there will be no activity of that sort on the second year of the pandemic.

The Saint Augustine Metropolitan Cathedral would not be jam-packed during the weekend Masses because church officials would continue to limit the number of churchgoers in compliance with the health protocols imposed by city hall. Neither would a Catholic procession take place.

This year’s fiesta day, the most awaited annual event in Cagayan de Oro, aside from Christmas and New Year’s days, will just be another abnormal day in the city that has been battling one of the worst COVID-19 surges in Mindanao in recent months.

Cagayan de Oro was under the strictest quarantine classification for over a month until President Rodrigo Duterte decided enough was enough and downgraded it to the less strict modified enhanced community quarantine (MECQ) this August to allow the city’s economy to breathe.

While the independent Octa Research group saw its COVID-19 cases dropping, the city continued to face the threat posed by the virus’ more transmissible Delta variant. With six new Delta variant infections confirmed in the city this week, the documented cases climbed to 31, the highest so far in Mindanao.

“Fiesta is in our hearts and memories. Nothing will ever take away the true meaning of fiestas. This subdued celebration is only temporary,” Moreno told Rappler.

He appealed to residents to avoid outdoor activities and just celebrate the feast day with household members in their homes.

In 2019, before the world knew what COVID-19 was, the city saw its biggest fiesta parade in recent memory, according to Major Ivan Vinas, spokesman of the Cagayan de Oro City Police Office (COCPO).

He said that year, some 10,000 people were parade participants, and an estimated 30,000 others lined up and watched in the streets as the colorful floats, marching bands, and street dancers snaked through a 2.5-kilometer stretch from the Rodelsa Circle to the Limketkai commercial center.

“Now, the budget is only around P800,000, mostly for prizes. We’re doing this just to keep the spirit up,” San Juan said.

The traditional fiesta sponsors are nowhere because there is practically no real activity organized by city hall.

Everything, including competitions, will be done online, said city hall spokesperson Maricel Rivera.

Just to keep the fiesta spirit alive, city hall would show the Higalaay Parada Minerala – a virtual parade of decorated miniature motorelas, the city’s version of tricycles – on Channel 45 of Parasat Cable TV, and live-streamed on the local government’s Facebook page on Friday morning.

The Cagayan de Oro fiesta has always been a crowd drawer, an event anticipated by hotels, restaurants, travel agencies, malls, and practically everyone in the once vibrant tourism sector of the city.

The days leading to the fiesta in pre-COVID-19 times spurred the local economy – conventions and corporate events were held in the city in time for the festivities. The pandemic changed all that.

Today, the hotels and inns either shut their doors temporarily, slowed down their operations, or turned into quarantine and treatment facilities.

“August used to be a month when our hotel occupancy was good. Not this year,” said San Juan.

In August 2019, the month of the last fiesta the city had before the pandemic, thousands took part in the traditional civic-military parade in downtown Cagayan de Oro.

The only major concern then was the threat of terrorism, a matter addressed by stringent security measures implemented by city hall, the police, and the military.

Today, no one talks about the possibility of a terror attack during the Cagayan de Oro fiesta anymore, a problem dwarfed by the deadly virus that has claimed more lives in the city and Northern Mindanao than all the bomb attacks ever carried out in the region in the last decade.

Region 10 has so far lost 1,641 people to COVID-19 since 2020. Cagayan de Oro accounted for seven of the 16 people who died of the virus throughout the region on Wednesday, August 25, data from the Department of Health (DOH) showed. – Rappler.com