WAITING. Residents of Barangay Pilar in Abuyog town, Leyte, wait for word of kin missing in the aftermath of the April 12 landslide.

The death toll from landslides and floods spawned by tropical storm Agaton in Baybay City and Abuyog town, Leyte rose to at least 118, officials said on Thursday, April 14.

The city government said 15 children were among the 52 residents hospitalized for injuries sustained during the April 11 disaster. Ten other injured kids were allowed to recover at home, the city added.

Abuyog  town reported 32 dead in Barangay Pilar, a village on a narrow strip of land hemmed in by the sea and a mountain, where a landslide crushed 80% of an estimated 100 houses on April 12.

The Abuyog landslide came on the second day of flooding as the local government was trying to get through blocked roads to evacuate stranded residents.

There was no shortage of rescue aid efforts, with teams from Northern Samar, Eastern Samar, Southern Leyte and Ormoc City augmenting the province’s disaster responders.

The BFP Eastern Visayas showed some members of the visiting teams carrying bodies recovered from the shoreline and gullies created by the landslide.

On the eve of Agaton’s arrival, the Petillas and Romualdezes clan were all busy appearing in the rallies of presidential candidate Ferdinand Marcos Jr., including one in Baybay City.

The Marcos swing culminated with a mammoth crowd in Tacloban City, hometown of Marcos’ mother, Imelda. But many of the audience were stranded after the rally, left behind by VIPs, and then rescued and ferried to safer areas by Kakampink supporters of rival presidential candidate Vice President Leni Robredo. 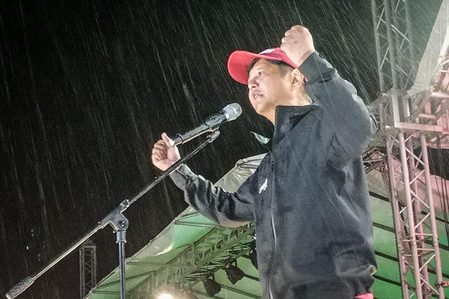