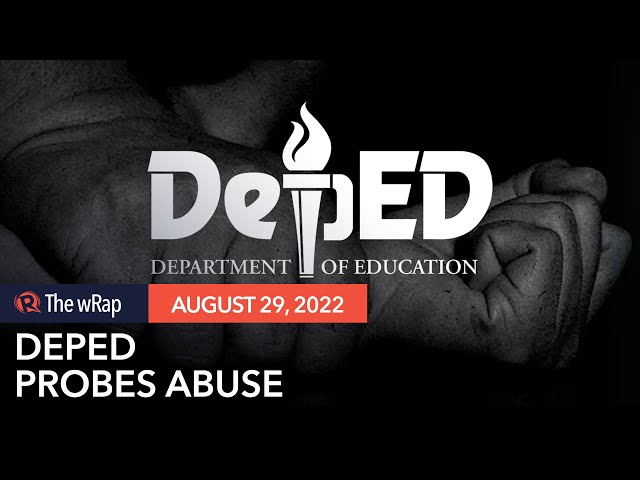 MANILA, Philippines – The Department of Education (DepEd) said on Monday, August 29, that it was probing reports of alleged sexual advances made by six teachers on students at Bacoor National High School in Cavite.

In a text message to Rappler, DepEd spokesman Michael Poa said the School Division Office of Bacoor, Cavite, was alerted about the problem last week. The DepEd released a statement after a social media post on the students’ experiences went viral on Sunday, August 28.

“An investigation is already being conducted. There were six teachers mentioned in the posts. All six were not given any teaching load and are currently on floating status,” Poa said.

“This is very, very disturbing. I have already spoken to the undersecretary concerned. We will refer this to our Child Protection Committee,” Poa said.

The DepEd said it was investigating six teachers, but Rappler source said there were five other abusive teachers.

In a Twitter thread on Sunday, Twitter user @eexpresso_o shared the alleged sex abuse experiences of some students with at least four teachers identified in the thread. The thread was originally posted on Facebook but got deleted for supposedly violating community standards.

Based on the Twitter thread, one of these teachers had been posting photos of his students on his social media accounts and making sexual innuendos. The oldest post could be traced back to 2014, based on the screenshot.

In one instance, a Facebook user commented on the teacher’s post, “Ang daming masarap ha (Many of them look yummy).” The teacher responded, “Ay naku sinabi mo pa (This is really true).”

A student came forward with her experience with another teacher. This time, the teacher seemed to groom the student, offering her to be his mistress. In one of their conversations, the teacher was persistent despite the student turning him down.

“Di naman mahuhuli. Ako bahala. Ayaw p kc um oo haha,” the teacher said in SMS jargon. (We will not get caught. I got you. Just say yes.)

Another conversation in the Twitter thread was about another male teacher insinuating to pay a male student in exchange for sex. When the student declined, the teacher said he was just checking how the student would respond when he gets the same indecent proposal.

He went on to say, “Pano f me mag offer sau na alagaan ka nya… gay sya…” (What if someone will offer to you, and he is gay?)

In 2017, another male teacher was making unwelcome sexual advances on a student, asking him to come to his house.

“Gusto mo ba pumunta minsan dito? May experience ka na ba sa bading?” the teacher asked. (Do you like to go here some time? Do you have experience with gay people?)

The student said he had none. The teacher persisted, “Gusto mo ba try natin?” (Do you like to try it?)

Recently, the Philippine High School for the Arts (PHSA) also made headlines after reports of emotional, verbal, and sexual abuse in the school. This prompted Vice President and Education Secretary Sara Duterte to tap the National Bureau of Investigation to conduct a probe into the issue.

The DepEd encourages concerned members of the community to submit complaints to the child protection committees in schools.

“But they can also report incidents like this to our Child Protection Unit — our SDOs (Schools Division Offices) and ROs (regional offices) have lead offices/ focal persons for child protection,” Poa said. – Rappler.com