ARBITRAL AWARD. Protesters from the Sentro Youth and Akbayan Youth gather at the Chinese Cultural Consulate in Makati City, on the 6th anniversary marking the victory of the Philippines in the UNCLOS tribunal on the contested waters of the West Philippine Sea, on July 12, 2022.

Facebook Twitter Copy URL
Copied
If approved by Congress, this will be the first time funds are allocated specifically for the promotion of the 2016 Hague ruling

MANILA, Philippines – The Department of Foreign Affairs (DFA) appealed to lawmakers to provide the agency an additional P29 million to fund proposed programs that would promote the Philippines’ landmark arbitral award on the West Philippine Sea.

Speaking at the DFA’s budget hearing in the Senate on Friday, September 30, DFA Assistant Secretary for Fiscal Management Serivces Ambassador Sulplicio Confiado said the proposed amount was crucial for the agency to launch a campaign both locally and in the international community, that would rally support for the 2016 Hague Ruling.

Confiado said the budget stemmed from a recommendation approved by DFA Secretary Enrique Manalo to implement the following projects:

If approved by Congress, funds allocated specifically for the promotion of the 2016 Hague ruling would be a first in recent years. The DFA presented proposed activities in the Senate weeks after lawmakers in the House of Representatives asked the agency if dedicated funds were set aside to increase awareness and foster support for the Philippines’ legal victory over China.

At the time, Manalo said no funds were allocated for this purpose but that DFA would come up with proposed budget and programs in line with strengthening the award, cited as an anchor of the Marcos administration’s policy on the West Philippine Sea.

Lawmakers have so far expressed support for the DFA’s initiative, though final approval of the proposal will still come during budget deliberations at the plenary debate.

During the hearing, Senator Robin Padilla likewise urged the agency to clarify its information drive on the arbitral award and the West Philippine Sea.

“Patungkol sa WPS, hangga’t hindi nakikita ng ating kababayan na nakapangisda ang kababayan natin doon, kahit tayo mag tumbling, hindi nila maintindihan yan,” he said. (On WPS, until our countrymen do not see we can fish there, even if you tumble, they will not understand that.)

Since the Philippines won its case against China in the South China Sea in 2016, experts have urged officials in Manila to rally international support for the award, saying broad support and cooperation among countries could put pressure on Beijing to comply with the ruling.

In previous years, however, former president Rodrigo Duterte largely chose to downplay the award in favor of fostering warmer ties with China. It was only in 2020 when the Philippines underscored the ruling was “non-negotiable” through pronouncements by then-foreign secretary Teodoro Locsin Jr. and later, Duterte, during a speech delivered at the 75th United Nations General Assembly.

During the DFA’s recent budget hearing at the House last August 31, Manalo gave assurances that the Philippines “will not let China forget” about its dispute with Manila in the waterway. 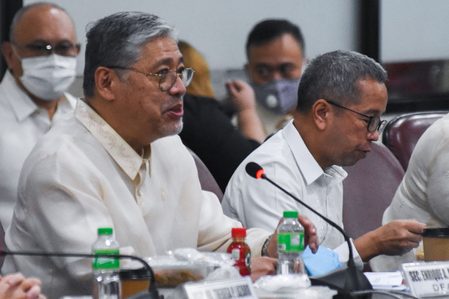 “It is by consistently referring to this that we’re able to uphold the President’s directive and policy. That is how we are implementing what we say are the anchors of our approach,” Manalo said at the time. – Rappler.com