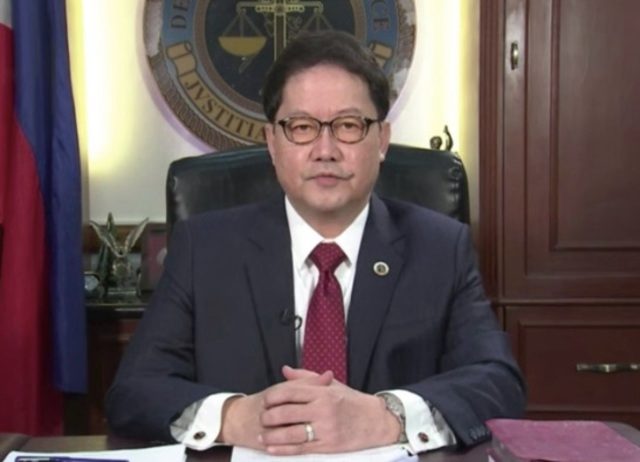 In an apparent move to avoid the International Criminal Court, the Duterte administration has created an inter-agency panel that will reinvestigate the 5,655 deaths in police drug war operations.

This is what Justice Secretary Menardo Guevarra told the United Nations Human Rights Council on Tuesday, June 30, during its 44th session.

Guevarra said the panel, which the Department of Justice heads, will engage the Commission on Human Rights (CHR) as an independent monitoring body.

“The continued, unhampered functioning of the Philippine Commission on Human Rights underpins our strong position against calls for an independent investigative mechanism including the one made before the International Criminal Court (ICC) from which we have withdrawn,” Guevarra said.

ICC Prosecutor Fatou Bensouda is set to decide this year whether or not she will open a formal investigation into the Philippines. To do that, she must establish jurisdiction which is dependent on two things – if the Philippines is unable or unwilling to prosecute the alleged crimes.

Bachelet’s report said there was a “failure of domestic mechanisms to ensure accountability,” seen as a nudge to the ICC.

“The independence of our courts is affirmed by convictions of an army general in 2018, and of members of a high profile political family and police officials in 2019, and the indictment of a former police chief in January this year,” said Guevarra.

Guevarra was talking about retired general Jovito Palparan, the Ampatuans, and former police chief Oscar Albayalde whom the Department of Justice (DOJ) wants charged for graft over the sensational drug recycling case in Pampanga.

What exactly will this panel do?

Guevarra said the panel will conduct a “judicious review” of the deaths.

“This panel, external to the Philippine National Police (PNP), re-evaluates these cases and examines the propriety of reinvestigating them or filing appropriate charges against erring law enforcement officers,” said Guevarra.

Carlos Conde of the international group Human Rights Watch said the creation of the panel is part of “propaganda to appease the United Nations Human Rights Council (UNHRC), to prevent it from taking action.”

“Crucial to keep in mind that Philippines announced this only when it was forced to respond to the UNHRC resolution. Truth is, it has never done anything to ensure accountability. On the contrary, it has sought to frustrate it,” said Conde.

The creation of the panel directly strikes down the PNP’s claim that there must be presumption of regularity in their operations.

Guevarra said the PNP must actually take the lead in the investigations of its own men, with or without a complainant.

“The Philippine National Police is obliged by its internal mechanism to conduct motu proprio investigations whether or not there are complainants on all law enforcement operations that result in deaths, and take action on this basis,” said Guevarra.

In an analysis of DOJ and PNP data in January 2019, Rappler found that prosecutorial and investigative systems of both agencies have left thousands of drug war deaths to go unsolved.

The gaps are from the lack of witnesses, complainants, even though the DOJ manual mandates prosecutors to investigate deaths on their own. The DOJ then explained that it cannot start investigating unless the police bring cases and evidence to prosecutors.

With this panel, Guevarra said it “will not only reinforce accountability on the drug campaign, it will tighten the web on existing mechanisms to prevent cases of impunity.”

“The panel intends to engage affected families, provide them with legal options, and assistance in criminal prosecution of law enforcers who have overstepped legal bounds in their operations,” said Guevarra.

Guevarra said the panel will present its report by November 2020.

Perete said the panel was created because of the government’s #RealNumbersPH initiatives.

“The RealNumbers Project of the PCOO has been taking stock of law enforcement operations involving illegal drugs since 2016. The creation of the review panel forms part of that work,” said Perete.

However, the government has known since 2018 that there were 5,000 people killed in legitimate police operations but belatedly created the panel.

“I would have to confirm with RealNumbers the coverage of their data. But as I reiterated, work on the creation of the panel has been ongoing since February of this year, including threshing out logistical and data sharing arrangements,” said Perete.

Pressed to answer the question why the review panel was created only now, Perete said, “Note that part of the work of RealNumbers is to reconcile the data from law enforcement agencies such as PDEA [Philippine Drug Enforcement Agency], PNP [Philippine National Police], and NBI [National Bureau of Investigation]. When that reconciliation was completed is a matter best addressed to RealNumbers.”

Perete was unable Tuesday to answer how many of the 5,655 deaths reached prosecutors under regular mechanisms, or before the panel was created.

“We have already started preliminary review of the files. Once this is completed, we will be able to determine this, among others,” said Perete.

Who makes up the panel?

Perete said the other agencies are members mostly to source documents and data from, but it’s the DOJ, PHRCS, DILG, PCOO and DFA that will “make the final evaluation based on the work of the review panel.”

Asked why the DILG is part of the decision-making body when the panel is supposed to be “external from the PNP,” an agency under it, Perete said: “The DILG is there because any recommendation relating to administrative (disciplinary) investigations will be implemented by it internally.”

Petitions to declare the war on drugs unconstitutional are still pending before the Philippine Supreme Court. – Rappler.com