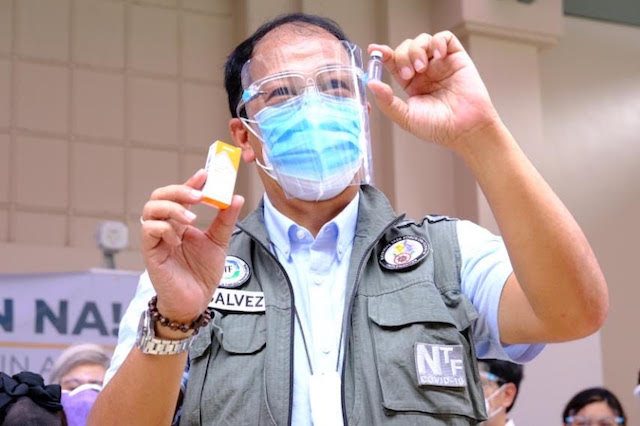 Lacson said in a statement that this was among the “red tape issues and the funding needs” hindering the country’s fight against COVID-19 that he and Senate President Vicente Sotto III discussed with vaccine czar Carlito Galvez Jr, testing czar Vince Dizon, and Baguio City Mayor Benjamin Magalong, contact tracing czar on Thursday night, May 6.

The P90 billion for vaccine procurement in 2022 would be included in the budget of the Department of Health, he said. “This is to be itemized for vaccines, instead of putting it under the Unprogrammed Fund, thus ensuring its availability,” Lacson said.

He said also made a suggestion when they discussed the P20 billion for vaccine procurement provided under the proposed Bayanihan 3 bill.

“I suggested to try first to be realigned from the unused appropriations of several executive agencies as it is allowed under the Constitution as well as the extended effectivity of the Bayanihan law already passed,” Lacson said.

The P20 billion is on top of the P72.5 billion already allotted for vaccines in the 2021 budget. It is also seen to complement the local government units that have allotted millions of their funds to procure vaccines on their own.

The deliberations for the 2022 budget, meanwhile, will begin by the fourth quarter of 2021.

Bayanihan 3 is still under deliberations at the committee level in both the House and the Senate. The House plans to begin deliberations on the bill on May 17, as soon as it reopens the plenary after the congressional recess.

Lacson said that they also discussed “immediate legislative action against red tape in the Food and Drug Administration (FDA) that hampers government efforts against COVID and which we agreed on a plan to resolve quickly enough.”

The meeting of the “czars” and the senators happened as the Philippines continues to fall behind other countries in immunizing its population against COVID-19.

The Philippine government initially promised to vaccinate 70 million Filipinos by the end of 2021 to achieve herd immunity, but this promise has been questioned as the current vaccination rate is too slow.

The country’s vaccine doses reached 5,540,600 after a new batch of Sinovac vials arrived on Friday morning, May 7. – Rappler.com