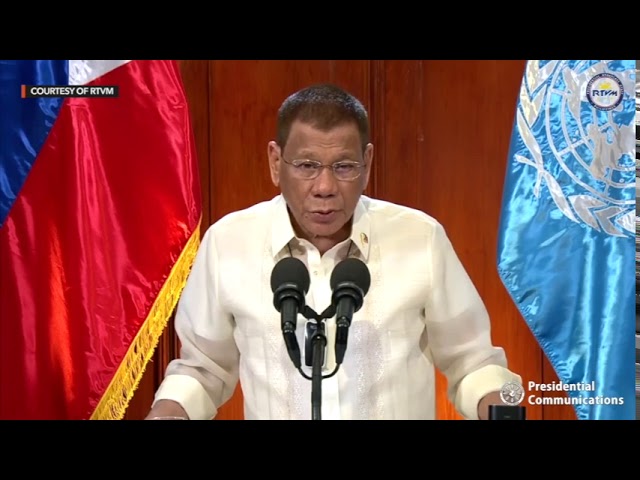 Facebook Twitter Copy URL
Copied
'The Award is now part of international law, beyond compromise and beyond the reach of passing governments to dilute, diminish, or abandon,' declares President Rodrigo Duterte

Philippine President Rodrigo Duterte made history on Wednesday, September 23 (Manila time), by using a United Nations assembly to raise the Philippines’ legal victory against China over the South China Sea.

In a move expected to agitate Beijing, Duterte asserted the Philippines’ rights over these waters – parts of which belong to the Philippines as the West Philippine Sea – in a speech before world leaders at the 75th United Nations General Assembly.

“The Award is now part of international law, beyond compromise and beyond the reach of passing governments to dilute, diminish, or abandon,” Duterte declared.

“We firmly reject attempts to undermine it,” he added before a virtual roster of world leaders that included US President Donald Trump and Chinese President Xi Jinping.

The statement was a milestone considering that, since the start of Duterte’s term in 2016, critics have blasted his defeatist stance on the West Philippine Sea. He has drawn criticism particularly for deferring to China in exchange for economic benefits, and for raising a false threat of war as an excuse for refusing to assert the rights of the Philippines.

‘This is the majesty of the law’

Duterte’s statement on the Philippines’ position – coming from America’s oldest ally in Asia which had previously said it was pivoting to China – stands out in a looming Cold War between Washington and Beijing. 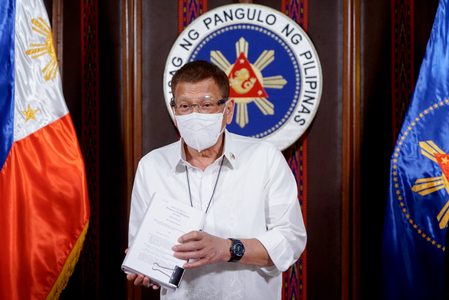 The superpowers’ rivalry, said UN Secretary-General António Guterres, was a great global risk that threatened to split the globe in a “great fracture.”

The Philippines, like other Southeast Asian states, has been courted by both China and the United States as the two world powers clash on the South China Sea.

Duterte said the Philippines would remain committed to the peaceful resolution of disputes in line with the United Nations Charter and the 1982 Manila Declaration on the Peaceful Settlement of International Disputes.

“We welcome the increasing number of states that have come in support of the award and what it stands for – the triumph of reason over rashness, of law over disorder, of amity over ambition. This – as it should – is the majesty of the law,” Duterte said.

In the days and weeks leading up to the UN General Assembly, naval powers France, Germany, and the UK backed the US and added their weight to increasing world pressure over Beijing’s actions in the maritime area.

In raising the ruling at the UN, Duterte in effect heeded repeated calls by former Philippine foreign secretary Albert del Rosario and retired Supreme Court justice Antonio Carpio who advised him to do this. Del Rosario and Carpio were among key officials behind the Philippines’ legal victory.

While Duterte’s statement on Wednesday was the strongest he has made on the South China Sea, the question is whether words can translate into action.

Poling said, “The real question is, will this last? Or will Malacañang override it in favor of Beijing again?” – Rappler.com