NEW MAGISTRATES. Justices John Lee and Eleuterio Bathan take their oath as the newest magistrates of the Court of Appeals before Presiding Justice Remedios Salazar-Fernando. Photo courtesy of SC PIO 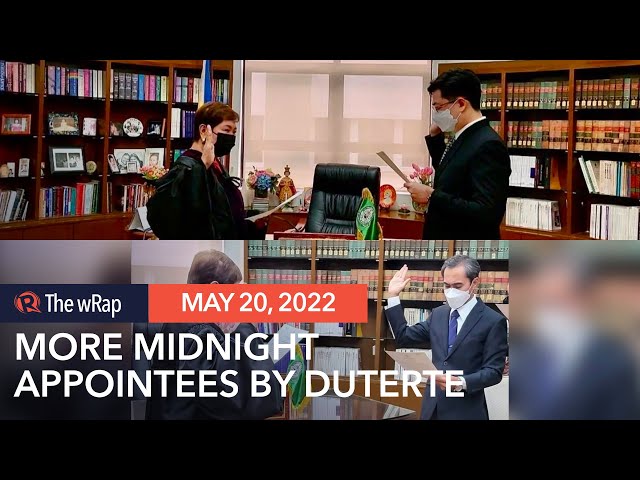 MANILA, Philippines – President Rodrigo Duterte continues to make midnight appointments in the judiciary, appointing two justices of the Court of Appeals, one of them a judge and the other, a private lawyer whose portfolio includes the firm of the presumptive first lady, Liza Araneta Marcos.

Duterte appointed former Quezon City judge Eleuterio Bathan and lawyer John Lee to the appellate court, according to appointment papers dated May 18, but released by the Supreme Court Thursday, May 19. There is no midnight appointment ban in the judiciary.

“[Justice Lee] started as an associate at the Zambrano & Gruba Law Offices and later, MOST Law (Marcos Ochoa Serapio Tan Law Office), before he put up his own law firm together with other lawyers,” said the profile released by the Supreme Court.

One of MOST’s founding partners was Liza Araneta-Marcos, wife of presumptive president Ferdinand “Bongbong” Marcos Jr. MOST handled some cases for the Marcos family, including stolen wealth cases and the human rights class suit filed by victims of the bloody Martial Law of the late dictator.

The Ochoa in MOST firm was Paquito “Jojo” Ochoa Jr., the executive secretary of the late former president Benigno “Noynoy” Aquino III. Another tie that binds is Justice Secretary Menardo Guevarra, member of the Judicial and Bar Council (JBC), who was partner of the De Borja, Medialdea, Ata, Bello, Guevara and Serapio Law Office, where Liza Marcos worked as an associate.

Guevarra’s firm represented Imelda Marcos in the case that eventually ended with the Supreme Court ordering the family to pay P23 billion, which had possibly ballooned to a P203 billion estate tax.