Facebook Twitter Copy URL
Copied
'This is one of the best judicial appointments of President Duterte,' says law professor Tony La Viña, 'her integrity is beyond doubt' 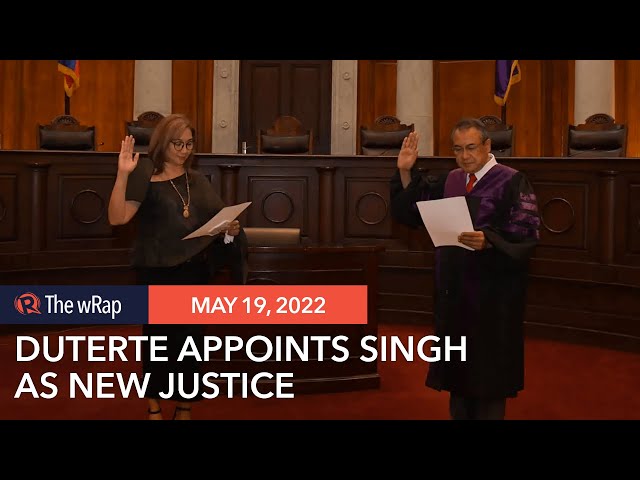 MANILA, Philippines – President Rodrigo Duterte availed of a legal midnight appointment for the Supreme Court, picking Maria Filomena Singh of the Court of Appeals (CA) to complete the 15-person bench that he managed to pack over the last six years with his appointees.

The Supreme Court confirmed the appointment past court hours Wednesday, May 18. Singh replaced Senior Associate Justice Estela Perlas Bernabe who retired last week. There is no midnight appointment ban in the judiciary, and according to Justice Secretary Menardo Guevarra, a member of the Judicial and Bar Council, Duterte could have passed this pick on to his successor.

But Duterte did not and instead picked Singh, who is just 55 years old, and will serve 14 years or until 2036 – beyond the term of incoming President Ferdinand “Bongbong” Marcos Jr. There are only two non-Duterte appointees in the 15-person High Tribunal.

“This is one of the best judicial appointments of President Duterte,” said law professor Tony La Viña.

Singh had been closely engaged with court reform projects, most recently as a member of the committee that revised the rules on expedited procedures, aiming that small cases can be resolved in as fast as five months. She is a recognized expert in rules of procedures, and evidence.

Singh penned a strong dissent when her division at the CA acquitted former Palawan governor Joel Reyes of murder over the killing of broadcaster and environmentalist Gerry Ortega. Later, when the case ponente had left the appellate court, Singh concurred in the decision that reversed the ruling to have Reyes rearrested. The Supreme Court, in March 2022, allowed temporary freedom for Reyes.

“She is brilliant, hardworking, progressive, both rigorous and imaginative. Her integrity is beyond doubt and she is fully committed to give access to justice for all,” said La Viña.

Singh is the sister of Health Undersecretary Maria Rosario Vergeire. Singh was appointed to the CA in 2014 by former president Benigno “Noynoy” Aquino III.

“She is also quite young which means she could be Chief Justice one day. Her being a woman is a bonus given she will now be just one of two women in the Court,” La Viña added, referring to Justice Amy Lazaro Javier.

By choosing young appointees, Duterte had packed the Supreme Court of justices who will serve beyond Marcos’ presidency. In his term, Marcos can only appoint four justices, but it includes a chief justice because the top magistrate, Alexander Gesmundo, will retire in November 2026.

Among the justices who will serve beyond Marcos are Senior Associate Justice Marvic Leonen and Associate Justice Benjamin Caguioa, second and third in the line of seniority respectively. They are also the only two non-Duterte appointees in the current composition of the Court.

They are also the two justices who were case leads in Marcos’ electoral protest against Vice President Leni Robredo. In the course of the case, Marcos tried to inhibit them both. Marcos’ cousin, Ilocos Norte Second District Representative Angelo Marcos Barba, endorsed the impeacment case against Leonen, but it did not go far. – Rappler.com