President Rodrigo Duterte has directed government agencies to support local government units (LGUs) in ensuring the timely delivery of COVID-19 vaccines, the President said in his regular Talk to the People aired on Wednesday, November 3.

Duterte said he ordered vaccine czar Carlito Galvez Jr., the Philippine National Police (PNP), and the Armed Forces of the Philippines (AFP) to provide “all necessary support” to LGUs in delivering vaccines and mobilizing resources.

The President also ordered Interior Secretary Eduardo Año to impose sanctions against LGUs and local executives who are “not performing nor using the doses given to them in the most expeditious manner.”

“I shall hold each LGU accountable,” he said.

Duterte said the PNP and the AFP must use its air assets to make deliveries. Once airplanes bring the vaccines to the regions, the law enforcers’ local helicopters would then bring the supplies to municipal governments.

However, Duterte brought up the issue of manpower. “The problem is, when the vaccines are brought to the regions, is there a sufficient number of people who can do the task of injecting?” he asked in a mix of Filipino and English.

Duterte said he hoped local officials would take time to attend to this possible issue.

In May, lawmakers filed a bill in Congress that seeks to tap dentists and medical technicians as COVID-19 vaccinators. Aside from doctors and medical professionals, the vaccination program law so far only lets duly trained pharmacists and midwives administer COVID-19 vaccines.

While the bill remains pending at the committee level, Metro Manila Development Authority Chair Benhur Abalos said on Wednesday that “many dentists” have volunteered to be vaccinators.

Duterte’s order comes as the Philippines faces a national slowdown of COVID-19 vaccine administration. On October 18, vaccine czar Galvez said that around 39 million vaccines were stockpiled, citing logistical challenges and vaccine hesitancy as some of the issues. 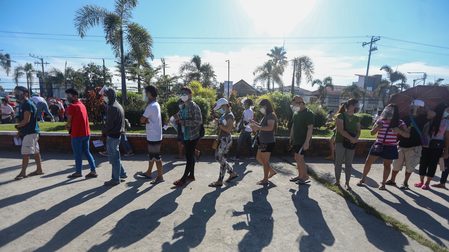 In Zamboanga del Sur, not less than 100,000 doses were wasted after a fire broke out in the Department of Health’s regional office. Año said the Department of the Interior and Local Government was investigating the incident.

The Philippines has begun vaccinating minors aged 12 to 17, with almost 38,000 receiving their first dose as of posting. Galvez said the government aims to inoculate 80% of the target by December. Plans for third doses booster shots for vulnerable populations are underway, too.

Around 35.58% of the Philippines’ target population is fully vaccinated.

Since the country’s vaccination campaign started in February, the Philippines has received more than 100 million doses from donations, tripartite agreements with the private sector, and government procurements. – Rappler.com