DUTERTE'S WARNING. President Rodrigo Duterte presides over a meeting with the Inter-Agency Task Force on the Emerging Infectious Diseases core members prior to his talk to the people at the Malacañang Golf (Malago) Clubhouse in Malacañang Park, Manila on November 17, 2020. 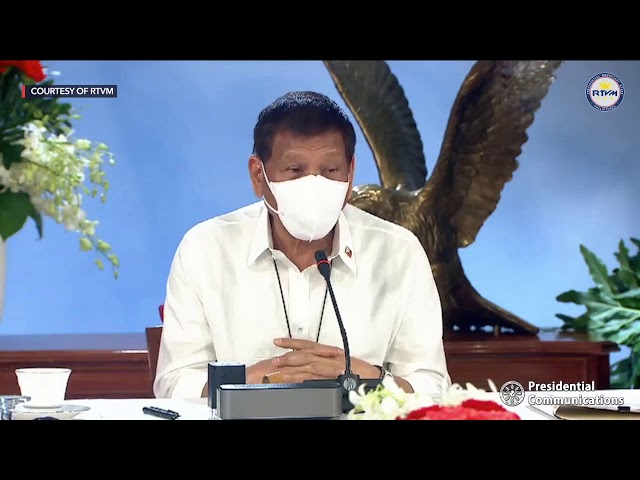 The academic strike launched by Ateneo de Manila University students has reached President Rodrigo Duterte, and he’s not happy about it.

In a meeting with Cabinet members on Tuesday night, November 17, Duterte threatened to cut funding for the University of the Philippines after being told about the academic strike.

“UP, fine, maghinto kayo ng aral (stop school), I will stop the funding,” said the President in remarks aired later that night.

It was Presidential Spokesperson Harry Roque who brought up the academic strike in the meeting.

(Sir, the crazy students don’t want to go to school, they’re protesting that they won’t submit academic requirements until the typhoon victims are given help.)

Duterte’s initial response was to tell students that they shouldn’t worry themselves about typhoon response.

“You are taking the cudgels of the poor ahead of your time. That is not your worry, that is the worry of government. Kami, sabi ko nagta-trabaho kami (I said, we are working),” said Duterte.

He then advised students to “stop schooling” so as to “save money” for their parents.

But Duterte used the opportunity to rant about his other beef with UP students.

(They do nothing but recruit communists. Then you study, but you love to criticize the government. You’re getting too lucky.)

He followed these remarks with a threat.

It was students of Ateneo de Manila University, a private school, who launched an academic strike starting Wednesday, November 18, to call out the government for its response to successive typhoons Quinta (Molave), Rolly (Goni) and Ulysses (Vamco).

The strike was also in recognition of how students affected by these storms would not be able to keep up with school work given the destruction of their homes, loss of gadgets, or access to power and internet. – Rappler.com