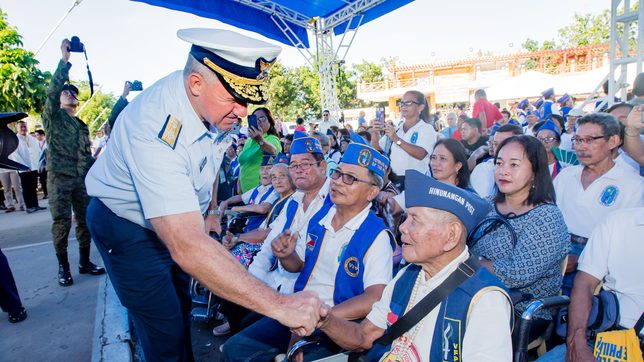 The US Coast Guard’s commanding officer conducts a three-day visit to the Philippines in Octob2019 to mark the 75th anniversary of the operation that began the Philippines’ World War II liberation.

Facebook Twitter Copy URL
Copied
During his speech marking the 77th anniversary of the World War II landing of American and Filipino forces on the Leyte Gulf, the President says frontliners also make countless of sacrifices for countrymen

President Rodrigo Duterte honored Filipino healthcare front liners during the COVID-19 pandemic on Wednesday, October 20, when he led the commemoration the 77th anniversary of the landing of American and Filipino forces on the Leyte Gulf during World War II.

“May we also take this opportunity to honor our modern-day heroes, our doctors, nurses, and essential frontliners who made countless sacrifices for the Filipino people during the pandemic,” Duterte said in a recorded video message.

Duterte said that their tremendous courage, selflessness, and resilience were truly worth-emulating, adding, “with the concerted efforts, we will soon claim victory in the battle against the unseen adversary.”

Aside from key Leyte officials, dozens of surviving Filipino and American World War II veterans who are in their late 80s and 90s were in the audience.

“As we honor our forefathers, let us not forget about the rare breed of heroism our nation has gloriously witnessed decades ago,” Duterte said.

Duterte also said that the Leyte landing was not just a turning point in World War II but also an affirmation of Filipinos’ “strong determination to achieve independence and freedom.”

US ties ‘strong as ever’

In a recorded video message, United States (US) Chargé d’Affaires Heather C Variava said that the ties between the two countries have remained “strong as ever,” citing the 4 million Filipinos who are living and working in the US.

“Our two countries are bound by our common beliefs in democracy and the rule of law and the sacrifices shared by both our countries’ veterans during World War II,” Variava said.

Variava reminded Filipinos that this year does not only represent the Leyte Gulf landing but also commemorates the 75th anniversary of the US-Philippine alliance.

“An alliance born through the shared sacrifice during the second World War as both nations fought bravely, side-by-side, to liberate the Philippines from Japanese occupation,” she said.

Although Variava chose to highlight the importance of the continued strong alliance between the two countries in her statement, the ties had been challenged by Duterte’s tirades and his administration’s controversial foreign policy changes over the years.

The relations hit a low after Duterte decided to unilaterally terminate the two countries’ Visiting Forces Agreement (VFA) in February 2020.

Duterte had expressed in words his bad blood against the US on many occasions.

After former US president Barack Obama urged Duterte to fight crime “the right way” and released statements critical of his drug war, Duterte told him to “go to hell.”

Duterte also made a declaration not to visit the US during his final State of the Nation Address (SONA) in July 2021, claiming that the Philippines would no longer act in the “shadows of great powers.“

In a turnaround, however, Duterte considered visiting the US in October this year to show his “gratitude” for its COVID-19 vaccine donations, which is the biggest so far to be given to the Philippines from a single country.

Despite Duterte’s history of dislike for the US, the traditional ally of the Philippines in the West, it has managed to stabilize the military relationship between the two countries.

After the Duterte administration repeatedly threatened to scrap the VFA for years, the Philippines kept its agreement with the US, which saw an increase in their joint activities.

In October 2021, the US also donated P200-million ($4 million) worth of aerial military devices to the country as part of its commitment to beef up the Philippine security.

“As treaty allies, we will continue to stand together as equal partners and friends for many more decades to come,” Variava said.

Japan ‘must not forget’

The battle in Leyte marked the first step in regaining the Philippines from the Japanese occupation.

In a recorded video message, Japanese Ambassador Koshikawa Kazuhiko extended his country’s condolences to the families of the Filipino soldiers and civilians who died during World War II.

“My profound respects go to those who perished during the war in the Philippines and my sincerest condolences to all those they left behind,” Kazuhiko said.

According to the National World War II Museum, Filipinos suffered torture, rape, pillage, and massacres, sometimes of entire villages, taking place all over the country.

“That the Ambassador of a past enemy country is invited to this ceremony shows we have all become friends. Still, we must not forget the past,” Kazuhiko said.

Although the two countries are already “friends closer than a brother,” Kazuhiko reiterated that the Japanese “must always remember what happened” in the Philippines.

“Since the war ended, Japan and the Philippines have continuously nurtured our friendship. This is due to the Filipino people’s forgiving heart and the tremendous effort and dedication of our two nations’ leaders,” he said.

Kazuhiko also emphasized the role of Japan and its allies in the stability and prosperity in the region and the world, adding, “Japan intends to continue close cooperation with all partners in our shared dream of a peaceful and prosperous world.” – Rappler.com