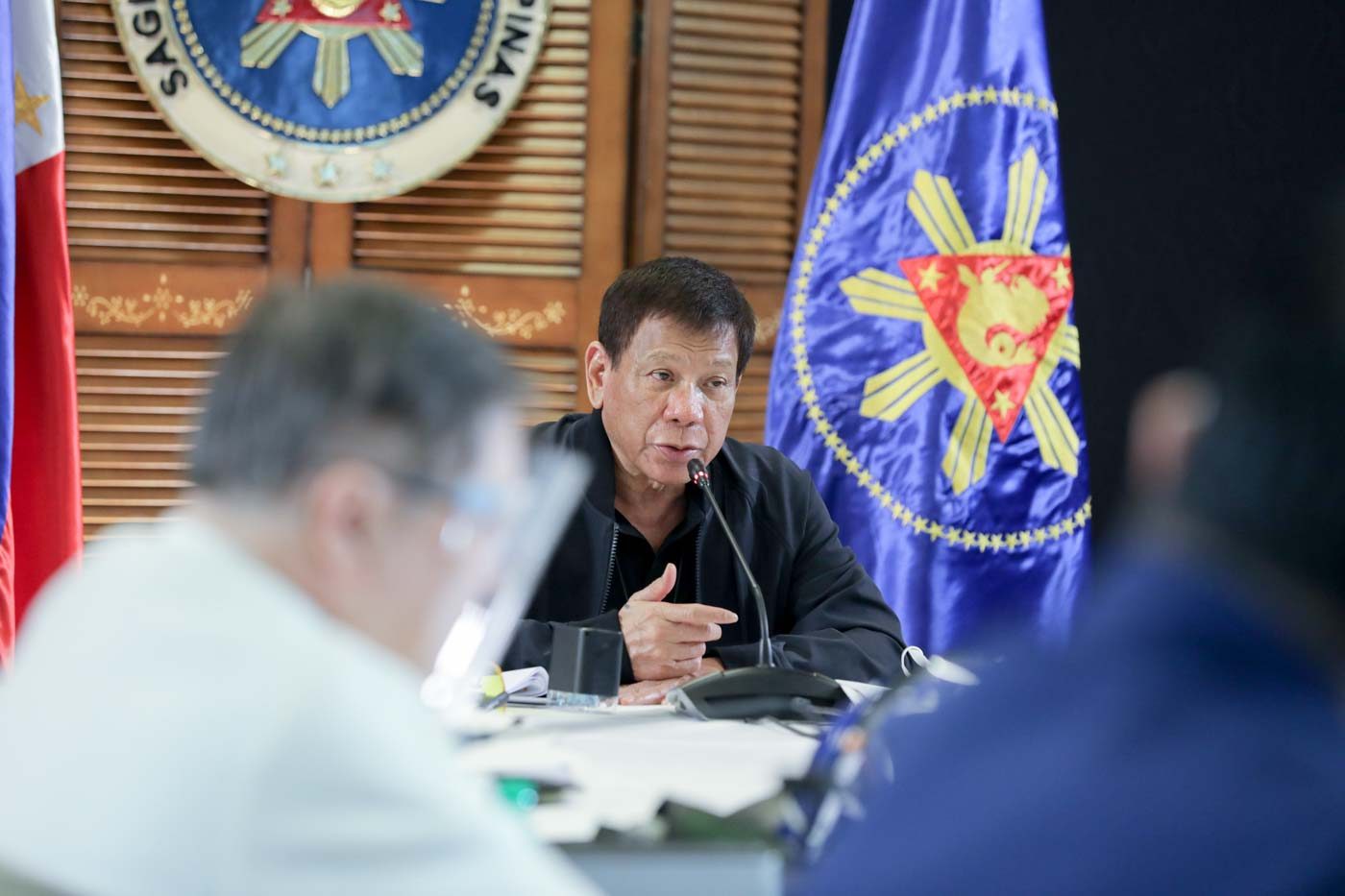 President Rodrigo Roa Duterte talks to the people after holding a meeting with the Inter-Agency Task Force on the Emerging Infectious Diseases (IATF-EID) core members at the Matina Enclaves in Davao City on August 24, 2020. ROBINSON NIÑAL JR./PRESIDENTIAL PHOTO

With his administration besieged by accusations of corruption in state health insurer Philippine Health Insurance Corporation, President Rodrigo Duterte promised no hocus-pocus in the spending of COVID-19 funds.

In a speech given on Monday night, August 24, but aired on Tuesday morning, Duterte ordered government agencies to make public the details of how they are spending funds allocated for responding to the coronavirus pandemic.

He wants agencies to regularly publish, in 3 newspapers of general circulation, the items they’ve procured and identify the companies that submit a bid to supply them.

(I will publish the items to be bought, and then after the bidding notice, who the bidders are. Name them. I want their addresses included.)

He initially ordered a publication of this information every 15 days then eventually settled on a monthly reporting to the public.

“Their reports of respective agency disbursement, how much was spent and for what at the end of the month. Monthly is better. We will see if the money really went where it was supposed to go,” said the President in a mix of English and Filipino.

As for supplies that come in from abroad and must then go through Customs, Duterte said the government must ensure they are represented by an actual person or their lawyer.

“‘Yung mga consignment na nasa pangalan lang, hindi na puwede ‘yan ngayon. Somebody must stand for them or need be their lawyer together with their client,” said the President, citing instances when Customs personnel would check on the office addresses provided by the consignee and find them non-existent.

(Consignments that are done just by name won’t cut it this time.)

He vowed to personally endorse corruption complaints to the Department of Justice (DOJ).

“I assure you, I will be the one to endorse the case to the prosecuting office. Ako ang magpirma mismo (I will sign it myself),” said Duterte.

Concerned about optics of PhilHealth anomalies

The President is determined to restore public confidence in government, concerned that PhilHealth anomalies, the subject of several recent congressional hearings, are affecting trust in his pandemic response.

Duterte spent most of his Monday speech promising no corruption in the spending of billions of taxpayers’ money for addressing the COVID-19 crisis.

He gave his speech on the day Congress finalized a law that allots P162 billion more for the Duterte administration to spend on pandemic measures. Bayanihan 2, or the Bayanihan to Recover As One Act, is now ready for Duterte’s signature.

In his Monday speech, Duterte stressed that the PhilHealth scandals are separate from the spending of coronavirus funds.

(There are two issues, you might get confused – you might think of something else, one for the other. It’s two issues – this PhilHealth being investigated by Secretary Guevarra… This Bayanihan 1 and 2 for COVID-19 are clean.)

But anomalies in PhilHealth are inseparable from COVID-19 government spending. The state health insurer is supposed to foot the bill of Filipinos for COVID-19 treatment and testing. Therefore, PhilHealth funds that are misused directly affect government efforts to curb the pandemic and help affected citizens.

Malacañang also aired the part of Duterte’s meeting where Justice Secretary Menardo Guevarra gave an update on an inter-agency probe on PhilHealth anomalies.

Guevarra heads a Duterte-created task force that is supposed to get to the bottom of PhilHealth corruption allegations and file cases against officials suspected of involvement.

The justice chief said 13 PhilHealth officials have been suspended by the Office of the Ombudsman for cases filed even before the recent congressional hearings.

The task force will be conducting lifestyle checks on executives.

The task force identified the following “centers of fraud” that they will investigate further:

Guevarra said the task force may propose a “partial” or “total” reorganization of PhilHealth in line with the structural reforms they said are necessary to address the loopholes that make the government corporation vulnerable to corruption.

The task force may ask Duterte to approve the creation of an Interim Management Committee for PhilHealth, said Guevarra. – Rappler.com