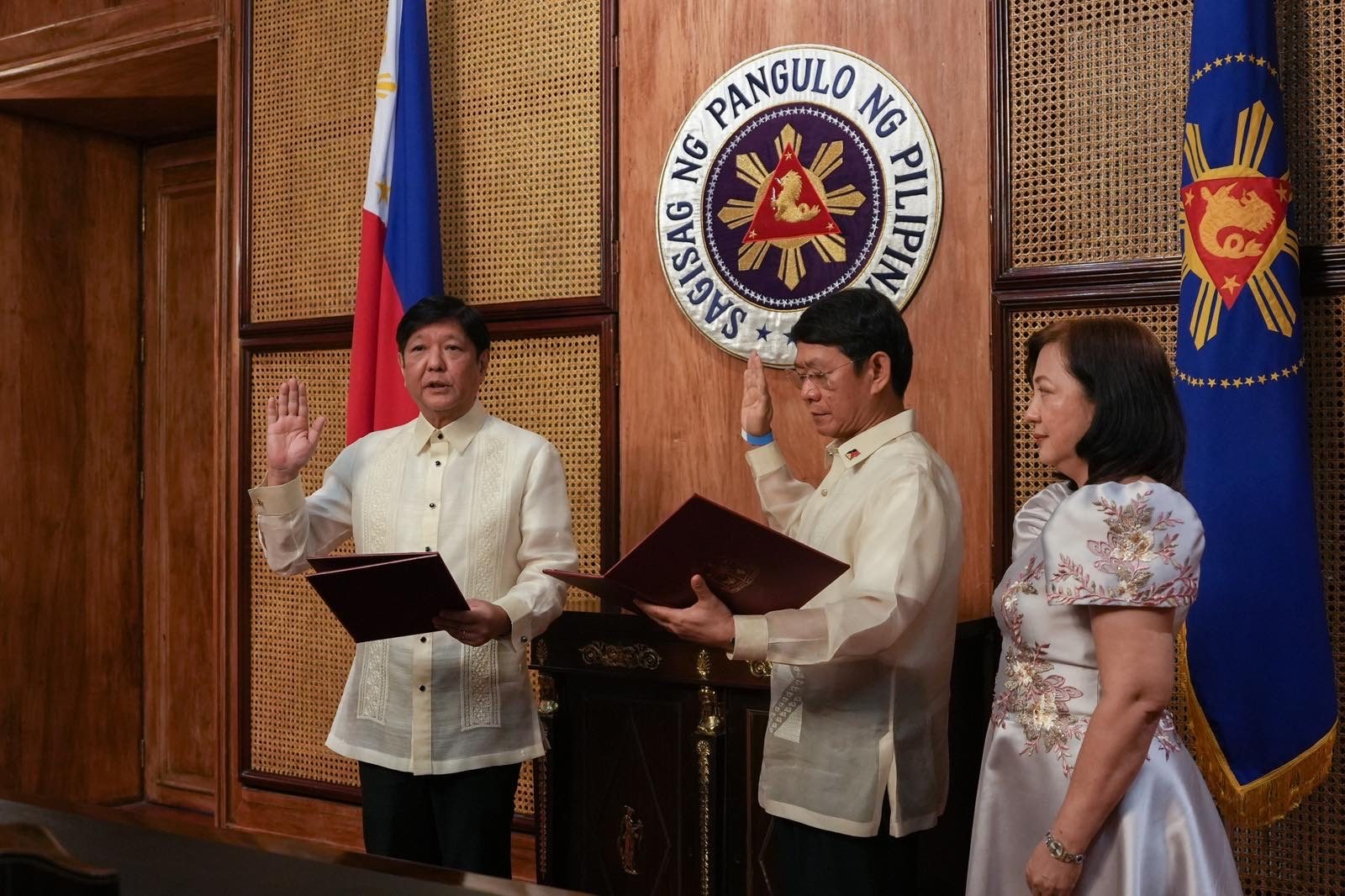 BACK TO THE CABINET. President Ferdinand Marcos Jr. swears in Eduardo Año as his national security adviser on January 14, 2023.

Facebook Twitter Copy URL
Copied
(2nd UPDATE) Clarita Carlos, the first woman to hold the top intelligence and security post, is leaving the Marcos Cabinet as she 'has decided to continue her pursuit of scholastic endeavors,' says Malacañang

“Former DILG Secretary Eduardo Año took his oath before the President as the new National Security Adviser. Professor Clarita Carlos has decided to continue her pursuit of scholastic endeavors as she joins the Congressional Policy and Budget Research Department (CPBRD) of the House of Representatives,” the Presidential Communications Office said in a statement.

“The CPBRD provides the House of Representatives with technical service in the formulation of national economic, fiscal, and social policies,” it added.

Shortly after the Palace announcement, Carlos issued a brief statement.

“I have realized that it is no longer politic to continue as NSA to the President and so, I have decided to migrate to another agency where my expertise on foreign, defense and security policy will be of use and I shall continue to help build a Better Philippines,” she said.

Carlos, a political scientist and retired University of the Philippines professor, was the first woman to handle the post, at least since the first Marcos president – the current President’s father and namesake – was in power. She was also the first National Security Council (NSC) director general in a long time to have come from the academe – most NSC chiefs have been former military officials or politicians.

Her exit is the third major shake-up in the country’s security sector, though this is not a surprise to some sectors in the military. As early as July last year, or a month after she was named to the post, senior military officers already sent word to Marcos that they did not trust Carlos, according to this piece by Rappler executive editor Glenda M. Gloria. “They see the retired UP professor as too cozy with Beijing, and in July they made this known to the President.”

That shake-up was then followed up by the resignation of Jose Faustino Jr., officer-in-charge of the Department of National Defense, over being kept out of the loop about Bacarro’s exit. Faustino was replaced by Carlito Galvez Jr., who had been Marcos’ peace and unity adviser.

Carlos told One News that she too was “not really privy” to discussions in Malacañang.

The National Security Adviser heads the NSC, an agency that advises the President on nearly all issues related to the country’s security – from counterterrorism to maritime security.

It’s been most crucial as the Philippines guards its claims against China in the West Philippine Sea.

It’s in this aspect where Carlos had apparently left officials, including Marcos himself, wanting. Security sources said Carlos was slow to convene the National Task Force on the West Philippine Sea and did not respond to situations quickly.

Attendees also said that when the task force did convene, it was mostly talk and that action points were hardly made.

The NSA role also means being vice chair of the anti-terror council, an executive body with the power to designate people and groups as terrorists even without going through the courts.

Carlos was not part of Marcos 2022 campaign team, but was perceived to be for him after she sat on the panel of the SMNI’s presidential debate, one of the handful of media-hosted engagements and forum he participated in.

The political science professor’s questions were seen as aiding Marcos’ intellectual profile at a time when he was facing criticism for not having a platform. Marcos would go on to win the 2022 elections with promises and catchy campaign videos sans a clear and detailed platform.

Back in the Cabinet

Año served the Duterte administration as interior secretary from November 2018 until June 30, 2022.

Prior to his Cabinet stint, he served as Philippine Army chief, and then military chief. He was an undersecretary at the Department of the Interior and Local Government prior to his appointment as agency head.

Año is a member of the Philippine Military Academy Matikas class of 1983. – with reports from Sofia Tomacruz/Rappler.com