Out and in again: Marcos brings Centino back as AFP chief 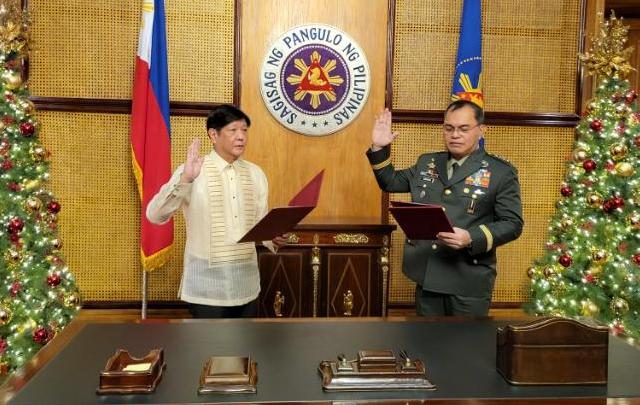 Facebook Twitter Copy URL
Copied
(1st UPDATE) The unthinkable has happened in the Philippine military: their former chief is returning to the same post he vacated five months ago

MANILA, Philippines – In a bizarre move, President Ferdinand Marcos Jr. has appointed Andres Centino as chief of staff of the Armed Forces of the Philippines (AFP) – five months after he plucked him out of the same post and named him ambassador to India.

The President himself was the guest of honor in the change of command from Centino to Bacarro.

Between that change of command and the January 2023 reappointment, Centino had been appointed by Marcos as ambassador to India. Centino’s name was already submitted to the Commission on Appointments.

He reaches the military’s mandatory retirement age of 56 next month, February, but a new law qualifies him for a fixed three-year term.

Bacarro, the 58th chief of staff of the AFP, was supposed to be the first armed forces chief to serve under a fixed term of three years following the passage of Republic Act No. 11709. His August 2022 appointment came a month before his scheduled retirement, too, like in Centino’s case now.

Rumors about Bacarro’s possible replacement began circulating in November last year, and one of the generals that Malacañang supposedly was eyeing to replace him was Army chief Lt General Romeo Brawner, who, like Bacarro and Centino, belong to Class 1988 of the Philippine Military Academy. It was not clear why Malacañang had wanted to remove Bacarro early on, though some military insiders said he was associated with dismissed executive secretary Vic Rodriguez.

In August 2022, Marcos said during the ceremonial turnover from Centino to Bacarro: “It is the perfect time to convey my utmost gratitude to General Centino for his exemplary service that he rendered as he faithfully executed the mandate of his office during the entirety of his tenure.”

Marcos said then that the ceremony, during which Centino “[gave] way” to Bacarro, was “a sacred military ritual and ceremony that symbolizes consistency and continuity in service complementing the democratic way of turning over the helm of authority from one administration to the next.”

Malacañang has not responded to media inquiries over the change in AFP leadership. – Rappler.com