An 80,000-strong crowd welcomed presidential candidate Vice President Leni Robredo at the Old Tagbilaran City Airport in Tagbilaran, Bohol on Friday, April 1. Gifts from talented supporters in the crowd were given to Robredo during her speech, including a rose that had lights on it. (VP Leni Media Bureau)

MANILA, Philippines – Vice President Leni Robredo’s ability to amass organic, “passionate” support from hundreds of thousands of Filipinos backing her presidential bid shows how she can “bypass” the need to focus on getting local politicians’ support and using political machinery to carry her to a May 9 victory, Senate Minority Leader Franklin Drilon said on Thursday, May 5.

In an episode of Rappler Talk, Drilon, vice chairperson of the once-ruling Liberal Party (LP), said the Robredo camp knew early on that they did not have local politicians’ support because of their being in the opposition. The administration under President Rodrigo Duterte “has made it very clear that your not being with the administration will not be looked upon with favor and will have consequences,” Drilon said.

“To me, this would have a very substantial effect – for the first time, a politician of the character, of the integrity of a Leni Robredo, can bypass, at least from what we see, the political machinery,” he added.

Opposition leader Robredo is the chairperson of the LP but is running for president as an independent candidate. 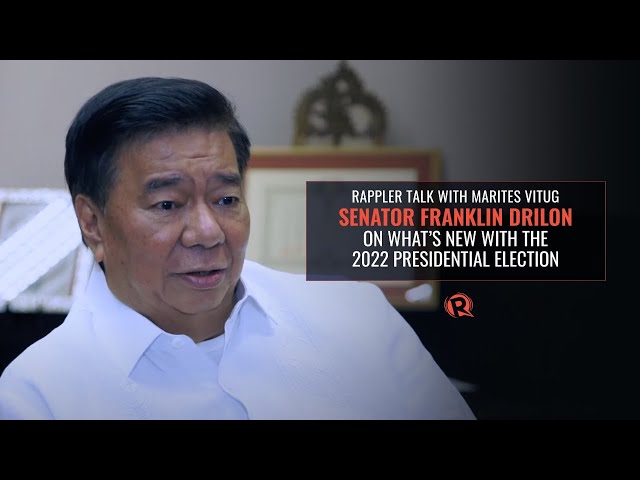 Drilon called the passionate support for Robredo as “something that [he has] not seen in past campaigns.” He compared the fervor of the volunteers to the emotions seen in the snap election of 1986, when late dictator Ferdinand Marcos was up against democracy icon Corazon Aquino.

“I have watched the 1986 [election]. I am here again. And talagang the passion is comparable, if not even more intense than what I saw in ’86… For the first time after 1986, I see the nuns in the street that I did not see in between [then and now]. Really, this is a phenomenon where people would see the need for an investment of themselves in the candidacy of VP Robredo,” he said. Drilon said that the mammoth crowds of supporters flocking to Robredo’s rallies in different parts of the country could not have been bought, or simply brought in by local politicians.

“Before, you [would] need so much budget and other things. Here, you have hundreds of thousands of people coming to the rally. And no local politician can have that kind of ability to bring them to the rally sites. And in the rally sites, you can really see how passionate the people are. These are the kind of people that you cannot just pay for them to come to the rally,” he said.

“Just the numbers alone would make it impossible to hakot them,” he added.

Hakot is a term used in political campaigns where people are paid to come to rallies, some of whom are also brought to the venues with transportation provided by local politicians or other fixers of the campaign.

Robredo’s biggest rally to date was the one held on her birthday, April 23, in Pasay City with over 400,000 attendees, according to local organizers.

Robredo has also acknowledged the shift in the ground that defied the traditional need to secure local endorsements to get high turnouts in political sorties. In her Bataan rally on April 19, Robredo told the crowd she was overwhelmed because she did not have local politicians’ support in the province.

(Every election I’ve experienced, all the discussions are about which local official, governor, mayor, congressman, is supporting you? But now, that is no longer important. Because the people themselves are deciding to fight for our country… Money and machinery have no say in how much you love our country.)

Drilon said on Thursday that he hoped the phenomenal support from the people would translate to votes on May 9, even if odds are not in their favor.

Despite the dedication seen in the massive rallies and volunteerism via house-to-house campaigns, which Drilon said has not been seen for national candidates, Robredo’s presidential preference remained steady in pre-election surveys. She garnered a 23% preference rating in the latest Pulse Asia survey in April. – a far second behind former senator and dictator’s son Ferdinand Marcos Jr., who sits at the top with 56%.

Governance expert Michael Yusingco earlier told Rappler that while rallies may contribute to an awe factor, they may not necessarily move people. However, more face-to-face interactions by the volunteers through house-to-house campaigns and town hall sessions might just “turn the tide.” – Rappler.com