PRESIDENT'S SPEECH. President Rodrigo Roa Duterte delivers his speech during the inauguration of eight integrated seaport development projects in the province of Mindoro on November 18, 2021.

President Rodrigo Duterte turned up the heat on presidential aspirant Ferdinand “Bongbong” Marcos Jr, calling the son of the dictator “a weak leader” who’s the reason why he wouldn’t want an alliance with Lakas-CMD.

(No I cannot because Marcos is there, I’m not impressed by him, he’s really a weak leader. That’s true, I’m not trying to bash anyone, but he’s a spoiled child, only son, of course he can talk, he delivers articulate English, because he studied in different places, but if there’s a crisis, he’s a weak leader and he has baggage.) 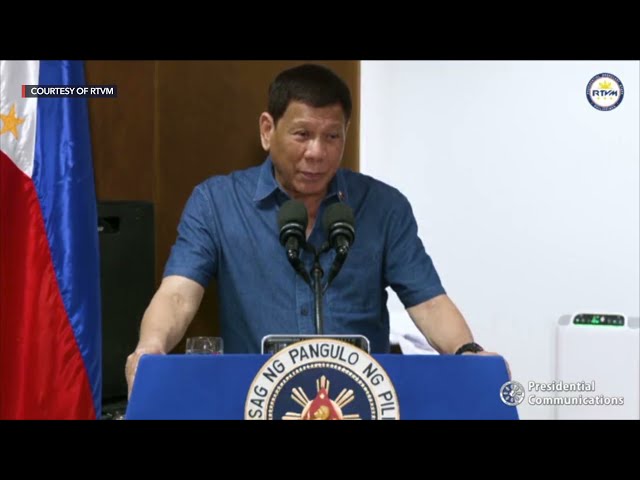 Although Marcos is with the Partido Federal ng Pilipinas (PFP), his running mate is presidential daughter Mayor Sara Duterte who had recently shifted to Lakas-CMD.

The President was asked if PDP-Laban would have a coalition with Lakas-CMD, which he answered by citing Marcos as the reason why he wouldn’t prefer it.

Malacañang belatedly aired this question-and-answer portion from Thursday, the same day where the President said in another event that a presidential candidate uses cocaine.

Although Duterte did not name the candidate he was accusing of drug use, the President said this candidate had a notable name and a notable father, references that fit Marcos. Early Friday, Marcos’ spokesperson Vic Rodriguez told radio DZRH they “do not feel alluded to” in the cocaine accusation, and that they “respect the President.”

In that speech where cocaine was mentioned, Duterte also called the candidate a “weak leader.”

Rappler sought comment on the latest statement that specifically named Marcos, but Rodriguez has yet to respond.

(His opponent, there are only the two of them in the political horizon, I wonder why suddenly people are fascinated with him.)

(I cannot mention his name because I was not there, but as mayor, I know that the rich people in Davao and this candidate were using cocaine. Just cocaine, I didn’t say shabu. But if you still want to take a gamble, at least I already told you.)

Duterte’s tirades against a supposedly cocaine-using candidate puts into question the legitimacy of his bloody drug war, and has put his government on the spot – why is this candidate not being investigated when thousands of others have been killed without charges?

Politically, however, this further unravels what was supposed to be an alliance between Duterte and Marcos, widely seen and considered as administration bets. Marcos even wanted Duterte to be his vice president.

The President instead ran for senator under PDDS (Pederalismo ng Dugong Dakilang Samahan), but only because PDP-Laban is embroiled in a legitimacy battle, and Duterte said he remains to be with PDP-Laban.

Duterte was reportedly disappointed by the decision of his daughter Sara to settle for vice president, instead of running for president. He earlier accused Marcos of orchestrating the deal, but to this day, the Marcos camp has not engaged in the word war – a strategy of silence commonly seen among front-runners.

Rodriguez, in the Friday interview with DZRH, brushed aside analysis that Marcos’ early rise in surveys would make him vulnerable to a later crash, like former vice president Jejomar Binay in 2016 and former presidential candidate Manny Villar in 2010.

(I personally think that the outpouring of support for Marcos makes this elections different. Their reception is different, the country has become more aware and people no longer accept the old propaganda against Bongbong Marcos.) – Rappler.com