“Sako kung mayroon (In sacks, if there are),” he added. 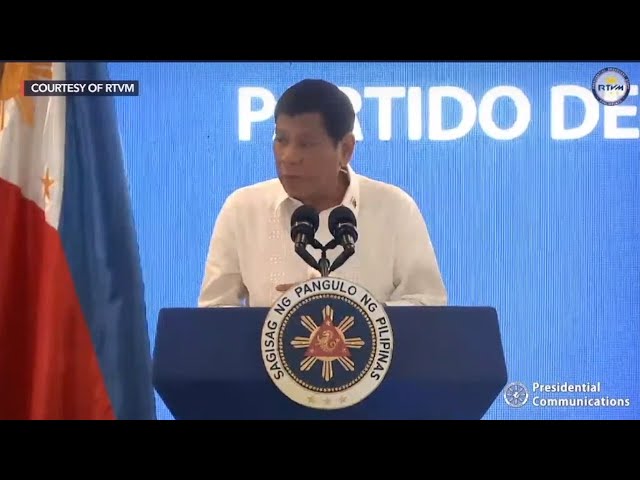 The Omnibus Election Code, or the law governing the conduct of elections and campaigning, clearly prohibits the use of public funds for any electoral campaign.

Listed under “prohibited acts” in the law is the “use of public funds, money deposited in trust, equipment, facilities owned or controlled by the government for an election campaign.” Use of government resources for “any partisan political activity” is also illegal.

Another act prohibited by the law is vote-buying.

Vote-buying is when a person “gives, offers, or promises money… in order to induce anyone or the public in general to vote for or against any candidate…”

Ironically, Duterte’s words right after mentioning sacks of money was to remind PDP-Laban members to stick to party principles, which include “enlightened nationalism” and “participatory democracy.”

“To my dear party mates, let us never lose sight of the founding principles upon which this party was built on. Let us never forget that our end goal is to improve the welfare of the Filipino people,” said Duterte.

In the same speech, Duterte said he will run for vice president in the 2022 elections to protect himself from legal cases.

PDP-Laban members led by Energy Secretary Alfonso Cusi want Duterte to run for vice president to continue the dominance of the party in the 2022 elections. These members, many of whom are national and local politicians, are banking on Duterte’s popularity to fuel their own electoral victories. – Rappler.com