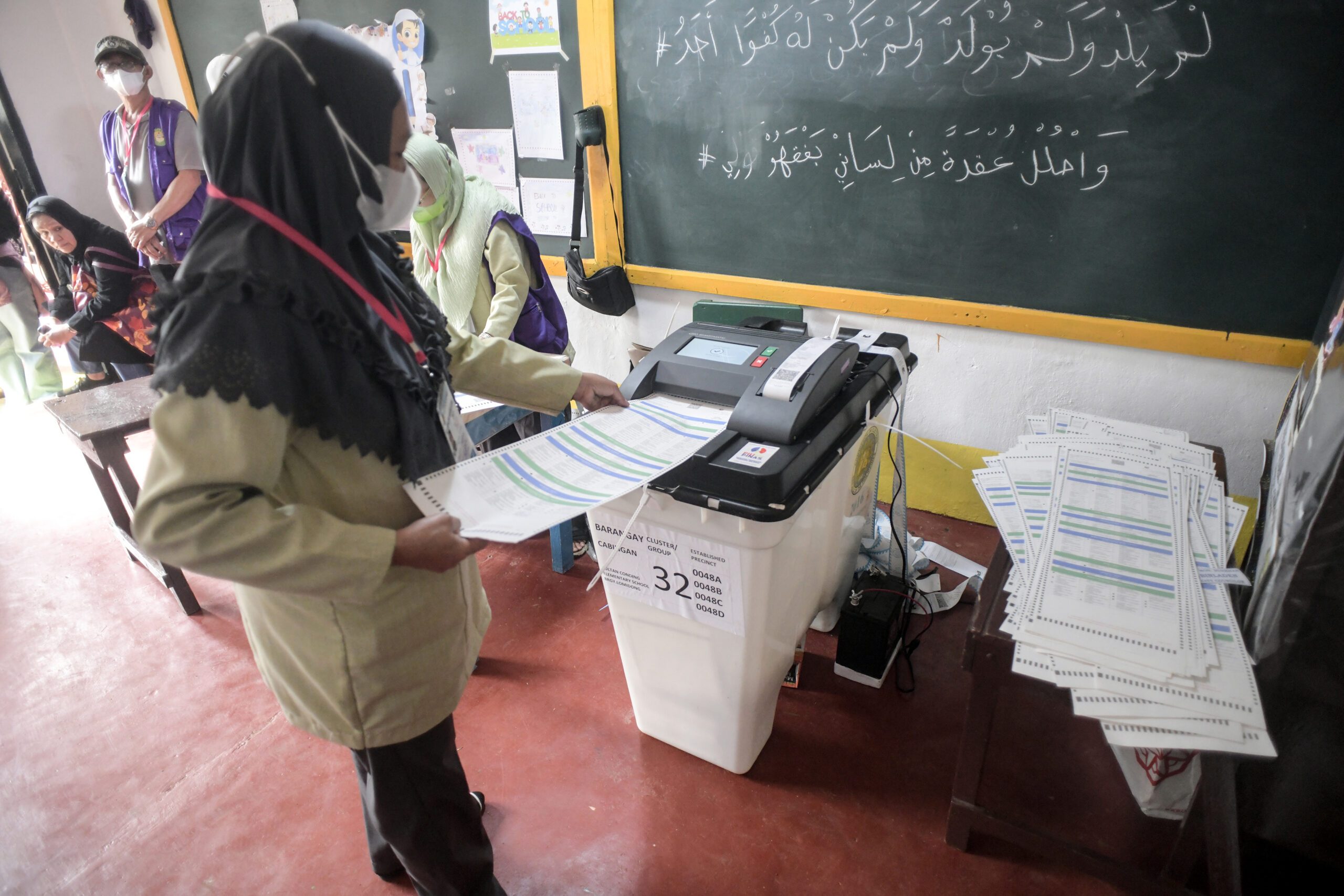 VCM. A teacher feeds a ballot into a vote-counting machine without the voter at the Sultan Conding Elementary School in Lanao del Sur on May 9, 2022.

CAGAYAN DE ORO CITY, Philippines – The May 9 elections for provincial and local officials in several provinces in Mindanao were reportedly far from being fair and honest due to rampant vote-buying and disinformation, according to election monitoring groups.

Two days before the May 9 elections, reports from these groups said money ranging from P20 to P5,000 per voter flooded communities in Misamis Oriental, Misamis Occidental, and Lanao del Norte.

“Runners” (political operators) on motorcycles reportedly distributed the money at night and in the wee hours of dawn to voters during the weekend before election day.

Art Bonjoc, a former journalist, said what was disturbing was that many voters stayed up late for the arrival of these so-called runners who were bringing the money.

“The voters waited into the night. They have no qualms that what they were doing was wrong,” Bonjoc said.

He said once the money was received, the voters supposedly wrote on the ballots whatever was on the list of names given them.

Bonjoc, who now works as a media consultant, said vote-buying helped further boost the chances of politicians who were ahead in the surveys.

A local politician admitted spending as much as P150 million to allegedly bribe voters – with good results. This could not be independently verified.

A report made by the International Observer Mission (IOM), which was sponsored by the International Coalition for Human Rights in the Philippines, said the May 9 elections were marred by rampant vote-buying, violence, disinformation, and a disturbing level of “red-tagging” against opposition politicians.

The IOM report was based on observations of how the elections were conducted in Central Luzon, Southern Luzon, Central Visayas, Western Visayas, and Mindanao.

In Lanao del Sur, reporters saw teachers filling out the ballots at the Sultan Conding Elementary School inside the campus of the state-run Mindanao State University on election day itself.

At the same school, reporters also saw soldiers putting indelible ink on the fingernails of the voters who had just voted because the teachers did not do that.

In neighboring Malabang town, three people were killed in just a matter of hours after violence erupted in the polling places.

The Commission on Elections (Comelec) declared a failure of elections in 15 villages in Tubaran town because the supporters of two mayoral candidates became unruly.

In the lead-up to the May 9 polls, social media and the airwaves became a major battleground for politicians vying for local elective positions.

Cong Corrales, editor-in-chief of the Mindanao Gold Star Daily and coordinator of #FactsFirstPH initiative, said they noted a surge in disinformation and fake news from the end of March towards May 9.

Corrales said while most disinformation and fake news monitored targeted candidates for national positions, some were also meant to discredit local candidates.

“Unfortunately, we cannot monitor all the traffic because we only have five staff members,” Corrales said.

The media, coalitions, civil society groups, business organizations, and research and legal groups banded together to form #FactsFirstPH to counter disinformation and fake news online during the elections.

This small group of fact-checkers scrutinizes disinformation and fake news.

Corrales said they were only able to check one post on Facebook out of many similar posts during the campaign period.

He said disinformation was also rampant on local radio, but many were largely unchecked.

Corrales said much of the disinformation was belted out by radio commentators or the so-called block-timers who served as paid hacks of local politicians.

“It was frustrating to hear how radio played a role in the disinformation campaign,” Corrales said.

He cited Cagayan de Oro mayor-elect Rolando Uy, currently the city’s 1st District representative, who filed 11 cyber libel cases against councilor and block-timer Zaldy Ocon for repeatedly imputing that he was a drug lord on air.

Ocon surrendered to police in Bukidnon after the cases were filed in court. He posted bail of P500,000.

Neptalie Batolenio, chair of the National Union Journalists of the Philippines chapter in Misamis Occidental, said poor wages among local community-based media workers made them susceptible to unethical practices.

He said almost all town mayors and politicians bought air time from the radio stations and used the programs to spread fake news against their opponents.

He said the battle of disinformation in the airwaves was so intense that when a local politician called for a press conference, only those on his payroll were invited.

“So what happened during the campaign was that the voters were not able to listen to real issues because the airwaves were flooded with disinformation,” Batolenio said. – Rappler.com

This story is supported by a grant from Internews.