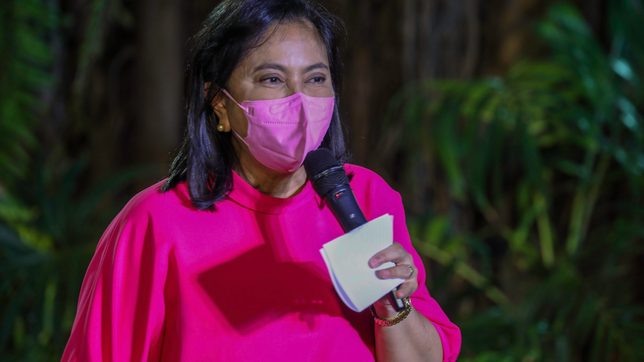 On Friday, November 26, Robredo clarified that she supported NTF-ELCAC’s mandate to combat the country’s insurgency problem, but that “careless” red-tagging has placed the task force in a bad light. She had previously pushed to abolish the NTF-ELCAC.

But this tempered stance got on the wrong side of groups pushing for the abolition of the anti-insurgency task force. On Saturday, November 27, groups said they were disappointed with Robredo and asked her to talk to the victims of human rights violations in reassessing her stance.

Makabayan chairperson and senatorial hopeful Neri Colmenares said Robredo’s seeming turnaround is “worrisome.” He added that the aspiring president could maintain good relationships with the military “without supporting a militarist, violent, and anti-people approach of the NTF-ELCAC.”

“May I respectfully point out to the Vice President that the problem with the NTF-ELCAC cannot be merely attributed to its ‘careless members’ but to a systemic policy that includes harassment and attacks against anyone perceived to be left-leaning or critical of the administration,” Colmenares said.

Human rights group Karapatan also pointed to the policy as the task force’s chief problem and that the “careless statements” were only a “minuscule part” of the problem.

“Addressing the root causes of the armed conflict cannot include violations of human rights and International Humanitarian Law. It should focus on breaking the chain of oppression and exploitation that has impoverished and shackled Filipinos,” Karapatan said.

“They were doing exactly what the NTF-ELCAC was created to do – vilify anyone who didn’t fit with government’s small-minded view of critical dissenters. They only stopped because we complained about what fools they were,” Africa said in a tweet. During her meeting the the military top brass, Robredo also noted that the NTF-ELCAC’s Barangay Development Fund was the “best part of everything.”

Robredo’s allies in the Senate have been vocal against increases in NTF-ELCAC’s barangay development fund. Even Senate Minority Leader Franklin Drilon previously said that this could be used as “election giveaway.”

Lilak (Purple Action for Indigenous Women’s Rights) cited an instance where indigenous women were asked to falsely surrender as a member of the New People’s Army in exchange for a “development package.”

“In times of hunger, to surrender has been a way to earn a ‘one time, big time.’ This is how the barangay development fund of NTF-ELCAC is being used, VP Leni,” said Lilak.

“Moreover, the barangay development is a state obligation. The funds need not go through an anti-insurgency program. Development should not be in the hands of the military,” Lilak added.

The Alliance of Labor Leaders for Leni (ALL4LENI), meanwhile, told Robredo that supporting NTF-ELCAC initiatives is “counter-productive for a just resolution of conflict.”

“Though people-identified local projects can address some of the communities’ immediate problems, it does not address the root causes of underdevelopment,” said ALL4LENI.

And to recall, the so-called barangay development fund has transformed under different budget secretaries for all intents and purposes. The allocation under the Local Government Support Fund used to be for bottom-up budgeting, then assistance to disadvantaged municipalities, and then it become the more general “assistance to cities and municipalities” before being used for anti-insurgency efforts.

“Carelessness did not harm, slander, imprison, or kill them. State policy did. It is a state policy implemented by the NTF-ELCAC,” they added.

Robredo spokesperson Barry Gutierrez later clarified that the Vice President still wants NTC-ELCAC to be abolished, but this was not apparent in her Friday statement. – Rappler.com