As the polls near, there is expectedly an increase in chatter about which politicians are interested in what government positions. In the online realm, however, speculations and trial balloons are presented as sure decisions and final plans. People on social media are then quick to share these posts, giving the misleading claims thousands of engagements. 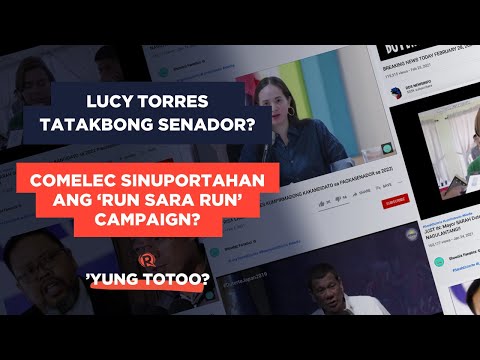 So how do you verify these claims about supposed candidacies? To begin with, when exactly does a politician’s electoral bid become official? When does he or she become a candidate?

For the 2022 Philippine elections, the Comelec promulgated Resolution No. 10695 on February 10, 2021. This includes the calendar of activities for the national and local elections on May 9, 2022.

What does the law say?

In a text message on Friday, June 4, Comelec spokesperson James Jimenez responded to Rappler’s question about the legitimacy of a person’s candidacy by referring to Section 13 of Republic Act No. 9369, or the amended automated election law.

Under Comelec’s calendar of activities, the period of filing for certificates of candidacy (COC) for all elective positions is from October 1 to 8, 2021. This also includes the filing of certificates of nomination and acceptance.

The campaign period for national positions starts on February 8, 2022, and for local positions on March 25, 2022.

What is a certificate of candidacy?

A COC formalizes the intention of a person to run for an elective position.

The Omnibus Election Code of the Philippines says that no person shall be eligible for any elective public office unless he files a sworn COC within a fixed period.

Comelec releases the guidelines for the procedure days before the filing period. The COC forms are usually available at the Comelec offices or can be downloaded from the Comelec website.

Does filing a COC guarantee a candidacy?

No. Filing a COC does not automatically put a person’s name on the ballot. The Comelec reviews all the submissions, taking into consideration the eligibility of those who filed. It will then come up with an official list of candidates.

The Comelec scheduled the posting of the tentative list of candidates for the 2022 elections on October 29, 2021. Aspirants may check the list either on the Comelec website or at the Comelec offices where the COCs were filed.

The last day for filing requests for correction on the names that will appear on the ballot is on November 8, 2021.

When can candidates start campaigning?

Technically, candidates can only campaign during the period set by the Comelec.

Section 80 of the Omnibus Election Code says that any election campaign or partisan political activity is prohibited outside the campaign period. This applies not only to aspiring candidates but also to their supporters.

However, the amended automated election law also says that “unlawful acts or omissions applicable to a candidate shall effect only upon that start of the aforesaid campaign period.”

Since candidacies are only considered official at the start of the campaign period, those who have been prematurely campaigning – such as those conducting motorcades and distributing election paraphernalia ahead of the official schedule – could not be held liable for their actions because no one is considered an official candidate yet anyway, as long as they don’t specifically call for people to vote for the politician.

Jimenez refers to this as a “loophole.”

In an interview with ABS-CBN News Channel (ANC) in February, Jimenez pointed out that such provision in the law allows certain players to skew the playing field since they have the means to campaign earlier.