Facebook Twitter Copy URL
Copied
The Taguig mayor, who describes himself as 'a certified DDS,' says he's impressed with Isko Moreno's leadership and says Filipinos need a 'competent mayor' to lead the country out of the pandemic

Though Taguig Mayor Lino Cayetano said he is not yet endorsing Isko Moreno’s presidential bid, he profusely praised the Manila local chief and likened him to President Rodrigo Duterte in an event in his city on Thursday, November 25. 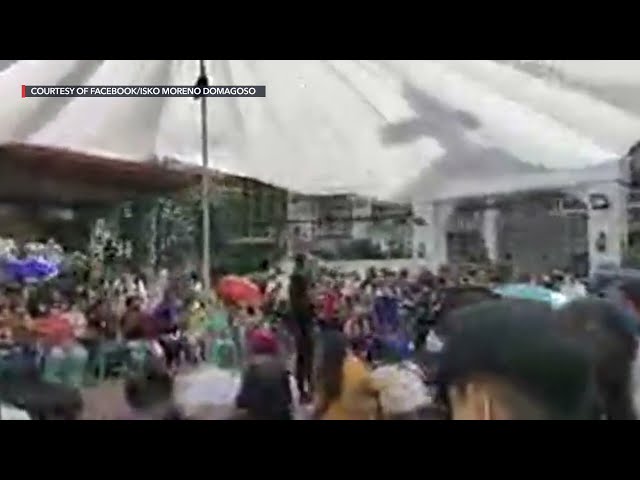 By DDS, he meant “Diehard Duterte Supporter,” a term referring to passionate supporters of the Chief Executive.

(Just on the first day, the way he cleaned up Manila’s streets, how he caught criminals, how he helped businessmen, vendors. You see how fast he took action?)

‘We need a mayor to be president’

In the middle of his speech, Cayetano clarified that he was “not yet” endorsing Moreno’s presidential bid and that “anyone who loves Taguig” is welcome there.

Yet he continued to heap praises on Moreno, saying his admiration for the 47-year-old local chief grew during the pandemic. Filipinos, added Moreno’s fellow mayor, need someone who “isn’t afraid of COVID-19” to shepherd the country to economic recovery.

(The fierceness I saw in President Rodrigo Duterte, I saw in Isko Moreno. It’s true, we need a mayor – a mayor who is competent.)

Cayetano is not seeking reelection in the 2022 polls. But his sister-in-law, Taguig 2nd District Representative Lani Cayetano, is running for mayor.

Does Lino’s views represent that of the rest of his family? It would be interesting because his older brother, Taguig-Pateros Representative Alan Peter Cayetano, was President Duterte’s running mate in the 2016 elections.

He had also fostered a friendship with Senator Bong Go who is now Moreno’s rival for the presidency. There are suspicions, however, that Go may withdraw his presidential bid after all, after he expressed doubts about his 2022 candidacy. Endorsement for Moreno or not, Moreno could still benefit from Cayetano’s messaging of likening him to Duterte.

After all, Moreno is trying to do a Duterte – heading to Malacañang straight from mayorship, banking on an image of decisive and fearless leadership.

(I believe in him…. He is better than me, truth be told.)

But two years later, when talk of Moreno’s possible presidential bid became rife, Duterte took a jab at him for his past as an actor who took on sexy roles.

On the same day as Moreno’s Taguig visit, the presidential bet said he would continue Duterte’s drug war. – Rappler.com