Pacquiao officially started his presidential campaign on Tuesday, February 8, in his hometown General Santos City – the only presidential candidate to hold a campaign kick-off in Mindanao.

“Why here in Gensan? Because Manny Pacquiao’s dreams started here in Gensan when he was young, so that he could help his family and relatives to overcome poverty and have a good life. It was here in Gensan,” he said in Bisaya, referring to himself in the third person. When he was a teenager, aside from being an amateur boxer he said he worked as a construction worker, a tailor, and a vendor. He remembered when he used to sleep in Luneta Park and on the pavement of other sidewalks along Manila.

He said he experienced how difficult it was to live in poverty and so he knows what he needs to do if elected president.

“Ito ang storya ng aking buhay. Alam ‘nyo ang hirap ng buhay na pinagdaanan ko. Maaring hindi ‘nyo pa naranasan,” he said. (This is the story of my life. The hardships I experienced. Maybe you have not experienced this.)

For Pacquiao, corruption is the reason why Filipinos remain poor. He said that politicians tend to only think about what they will do in the next three or six years in office, instead of coming up with a vision and implementing a master plan for the next few decades.

“If I become the president of the Philippines, the thieves in government – appointed or elected, big or small, and even known figures – you will all see how I will bring them all to jail,” he added.

He said that he was not speaking as a traditional politician, but as someone who leads and protects the vulnerable. 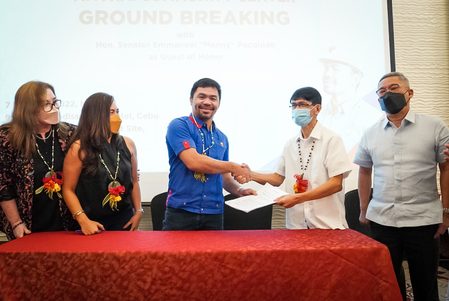 No VP in rally

Atienza was unable to attend the proclamation rally due to a sprain. In a media interview, Pacquiao said that he told Atienza to skip the event. 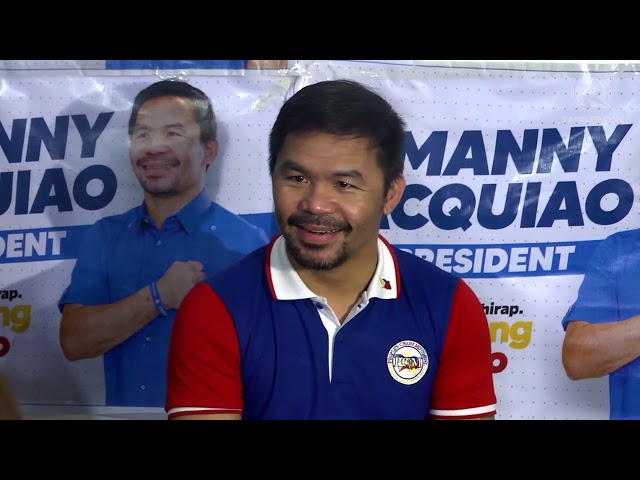 Aside from Atienza joining virtually, most senatoriables part of Pacquiao’s slate were no-shows and sent recorded messages instead. Only broadcaster Raffy Tulfo and former governor Lutgardo Barbo attended the rally in person, while Senator Sherwin Gatchalian was represented by celebrity girlfriend Bianca Manalo.

Pacquiao also did not invest in too many performances, aside from Freddie Aguilar and Fliptop emcee Jonas Dichoso who are supporting his presidential bid.

While it seemed like Pacquiao’s rally lacked power punches, it was his mother Dionisia, also called Mommy D, who delighted the audience. In her speech, Mommy D said she hesitated at first when told about his son’s plan to run for the top post, noting it would cost a lot of money.

“When he ran for the first time here in General Santos, I cried because I saw we were losing sacks of money,” said Mommy D in Bisaya as the crowd erupted in laughter. 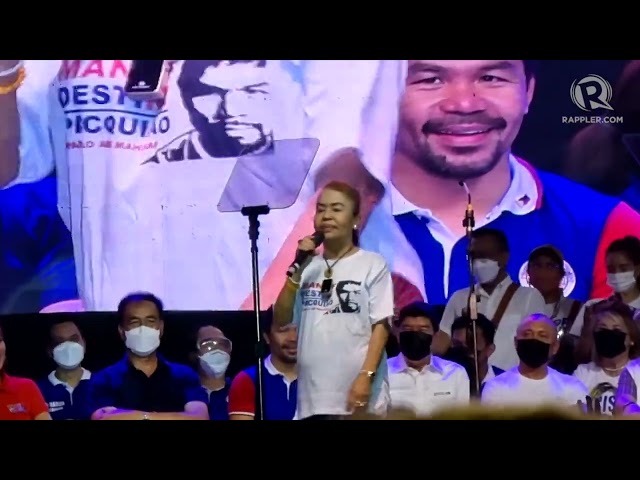 On Wednesday, February 9, Pacquiao unveiled his massive free housing program in Alabel, Saranggani. The tour was supposed to be a part of his itinerary on Tuesday but it was later moved to the following day.

This free housing program that he speaks of is proof that it can be done and he has already done it with his own money.

Pacquiao wants to show that he’s not all talk – he has already done it.

Pacquiao said that he wants all homeless Filipinos and the poor who are renting to be given a free house. He estimates that some 10 million Filipinos will need one.

He said that if elected president, he will build high-rise buildings as part of his housing program in Metro Manila, similar to what is being done in Singapore. He said this will also help in waste management.