LEGAL VICTORY. Filipinos stage a protest outside the Permanent Court of Arbitration in The Hague, the Netherlands, on July 12, 2016, the day the tribunal released its ruling favoring the Philippines against China.

If opposition leader Leni Robredo were to become president in 2022, she would pursue deals with China but its recognition of the historic arbitral ruling saying the Philippines owns the West Philippine Sea is a non-negotiable.

Robredo on Thursday, October 14, gave a glimpse of the foreign policy she would be pursuing when asked to elaborate on it during the Rotary Club of Manila’s 16th Weekly Membership Meeting, where the Vice President was invited as speaker.

She first said having an “inclusive and independent” foreign policy that favors no specific countries would be beneficial for the Philippines. 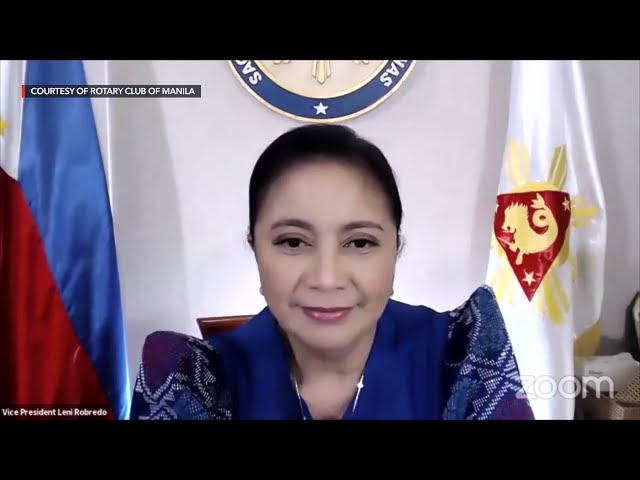 Robredo then zeroed in on China, saying she would have no qualms on cooperation with Beijing in areas where there are no conflicts, like trade and investments.

But when it comes to the West Philippine Sea, China must first recognize that it truly belongs to the Philippines before deals like a possible joint exploration of resources can be pursued.

“For China, we will collaborate with them in the areas that we have no conflict, such as trade and investments, much like what Vietnam has been doing. But when it comes to the West Philippine Sea, we cannot deal with them without their recognition of the arbitral ruling,” said Robredo.

Robredo has been among the loudest voices in the Philippines opposing China’s militarization of the West Philippine Sea, a part of the South China Sea that belongs to the Philippines but China falsely claims as it owns.

The Vice President once said that China’s presence in Philippine waters is the “most serious external threat” since World War II.

In 2016, an arbitral tribunal already junked China’s expansive claim over the South China Sea, a historic win for the Philippines.

But no less than President Rodrigo Duterte has been downplaying the Philippines’ tribunal victory over China in favor of getting loans and grants from the regional giant. Duterte claims that insisting on the Philippines’ legal triumph would only spark war with China.

Critics, however, have said that the Philippines can push to forge stronger alliances with other foreign nations to put more pressure on China to leave the West Philippine Sea.

Robredo, in particular, said she would move to further strengthen relations with the United States to help protect the West Philippine Sea. The US is the Philippines’ oldest treaty ally.

“We want to create better ties, especially in the areas of protection of our citizens, embracing exports, bolstering trade, military intelligence capabilities, and of course, protecting the West Philippine Sea,” said the Vice President.

Robredo also eyes stronger diplomatic relations with the Philippines’ other allies in Southeast Asia, the European Union, the United Kingdom, Australia, and other countries where there are large concentrations of Filipino migrant workers.

“We do all we can to cement bilateral agreements with them to ensure the protection of Filipinos and to ensure satisfactory labor conditions for them. We will be open to working with everyone so long as it is, of course, to the best interests of the Filipino people,” said Robredo. – Rappler.com