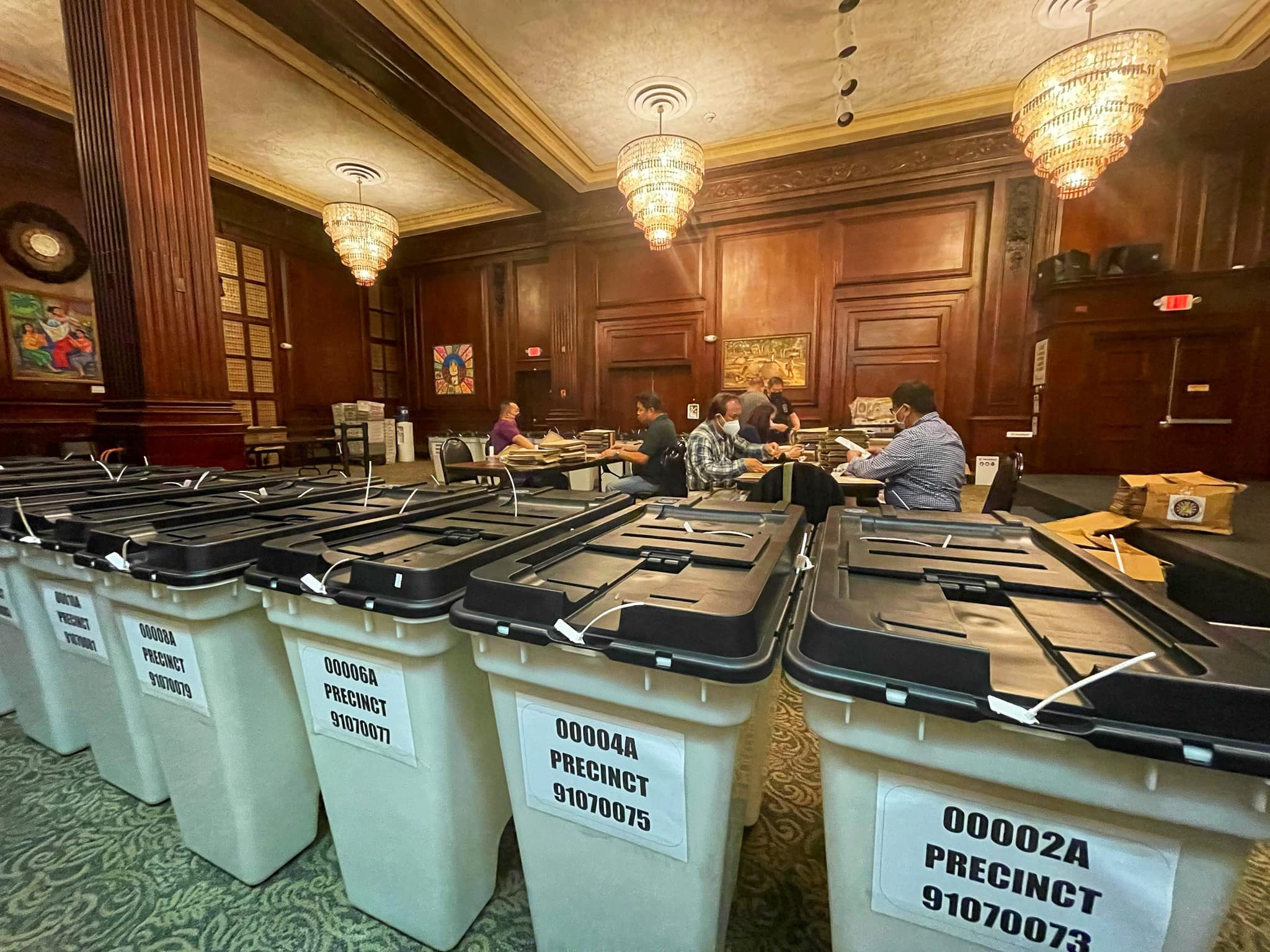 AT WORK. Personnel at the Philippine consulate in New York work on post-delivery checks of election materials on Black Saturday, April 16, 2022.

Facebook Twitter Copy URL
Copied
Some Filipino voters in the US have yet to receive their ballots more than a week since the voting period began, but the Comelec says extending the election past May 9 would be a violation of the Constitution

MANILA, Philippines – Representatives of Filipino communities in vote-rich United States called on the Commission on Elections (Comelec) to extend the deadline to vote for overseas Filipinos as many voters in the country reportedly had not yet received their ballots in the mail – more than a week since the voting period began.

In a press briefing Tuesday, April 19 (Manila time), disgruntled Filipino voters in the US lamented how they had not received their ballots yet, and neither did many of the community members they knew.

The overseas voting period began on April 10 and will last until May 9. Voters in the US are availing of a postal mode of voting, where they receive their ballots in the mail, and also send them back by post. Some consulates have allowed the option for voters to pick up their ballots from the posts, accomplish them in their own time, and return to the consular offices.

(We are calling for a reconsideration or a push for the Comelec to extend our [voting period], because it’s not our fault [the ballots are delayed]. They created this condition wherein our countrymen, our voters here in the US, are having a hard time in this Philippine election, because of their shortcomings.)

“Even if the consulates or embassies say that it’s in the hands of the Comelec, this is the accountability of the Duterte government,” she added.

Xenia Tupas of Migrante Los Angeles echoed the call for an extension in the voting period.

“Everybody has been expecting their ballots in the mail. I’ve been anticipating my ballot and asking friends if they received theirs. I only heard of a few people who have received their ballots. I think as much as we try to convince our kababayans in our area to return their ballots as soon as they get them… [I think we should be discussing] to ask Comelec for an extension because of the delay of the receipt of the ballots of the voters, otherwise we’ll be disenfranchised,” she said.

“The elections cannot be extended beyond May 9, because that would be a violation of the Constitution,” said Casquejo, who heads the Comelec’s office for overseas voting.

The US is the third most vote-rich country in the Philippine overseas election, with 198,935 registered voters out of the total 1.6 million worldwide.

Voters in Italy had also sounded the alarm over the delayed delivery of ballots.

The Philippine consulate in New York, which experienced delayed delivery of ballots from the Comelec, regularly posts updates on its Facebook page on what happens amid the delays.

On Tuesday morning (Manila time), the consulate posted that its staff worked overtime on the post-delivery checks of the ballots for at least eight days, including on the Holy Week holidays.

“But as we have been saying, we are not machines. The process of sending the ballots is not as easy as bringing them to the post office. We have to sort out the envelopes, check their contents, match the names on the envelopes and the voters list, place stamps, seal the envelopes, count, and then deliver. As a result, all of us are sleep-deprived and exhausted. But we will carry on and get the job done,” said consulate general Elmer Cato.

With the unlikely extension for the voting period, the Filipino community representatives in the Tuesday press briefing voiced ways that the voters could take action despite the delays.

For Eric Lachica of US Filipinos for Good Governance (USFGG) the voters should make the effort to engage with consular officials on a regular basis so they can track the ballots’ deliveries.

Meanwhile, Tabitha Ponciano from Malaya Movement USA said that Filipinos should go beyond relying on the Comelec to speed up the process for voters.

“We have to look beyond what the Comelec can do, or what we can ask the Comelec to do at this point. I think we have to really emphasize the need to collectively take action. We have to do what we can that’s in our power to make sure that, for those who have their ballots, that their ballots are counted,” said Ponciano.

“We have to call for the investigation of the Comelec for these discrepancies [and] inadequacies, and ensure that they’re held accountable for this poor handling of this very critical election,” said Ponciano. – with a report from Dwight de Leon/Rappler.com