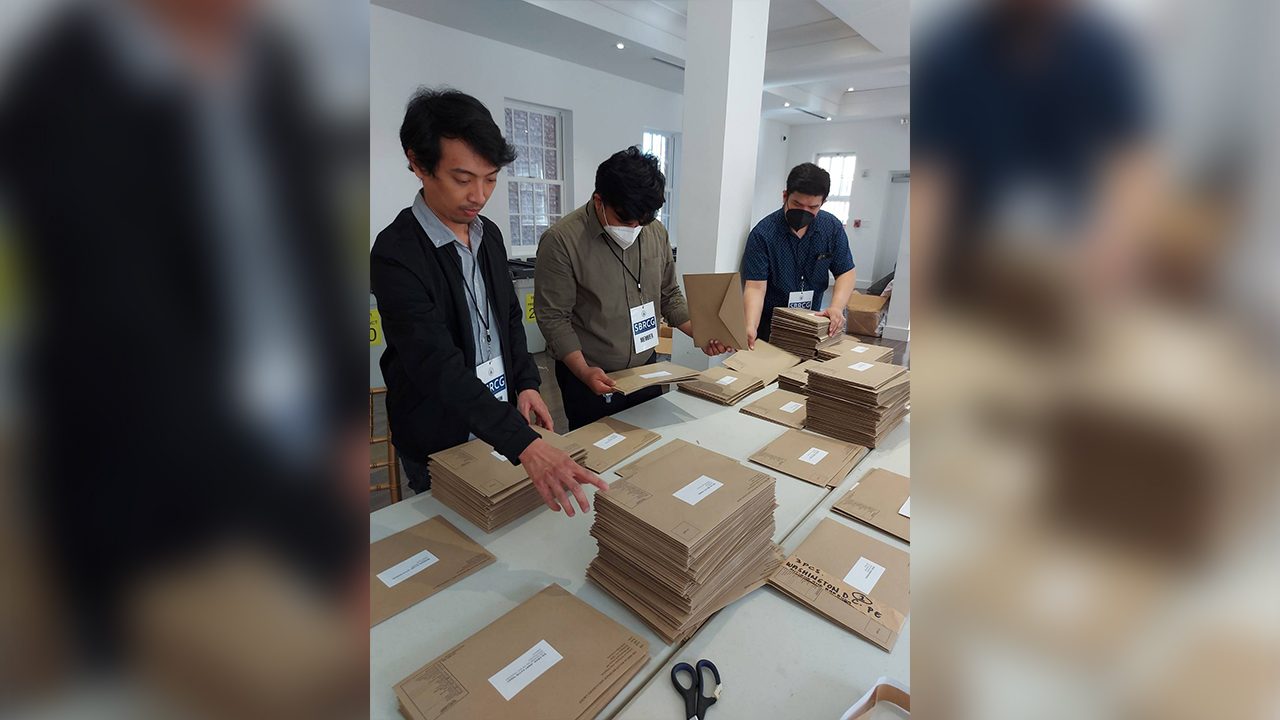 PROCESSING. The Philippine embassy in Washington D.C. conducts post-arrival processing of the first batch of ballots for the 2022 overseas election on April 12, 2022.

MANILA, Philippines – Overseas Filipino organizations in Europe and the United States expressed concern over how some voters still have not received their ballots in the mail for the 2022 elections, around three days since the month-long voting period began on Sunday, April 10.

In a statement on Wednesday, April 13, Migrante Europe secretary general Rhodney Pasion said that Filipinos under the Philippine consulate in Milan, Italy have yet to receive their ballots and cast their votes.

“Ang tanong namin sa Comelec (Commission on Elections), nasaan na ang aming balota dito sa Northern Italy?” he said. (Our question to the Comelec is, where are our ballots here in Northern Italy?)

Filipinos in some parts of the US are also reportedly experiencing a delay in the delivery of their ballots. On Tuesday, April 12, the Philippine embassy in Washington D.C. announced it received the first 10% of the total expected ballots to arrive and that it was preparing for them to be mailed to voters.

In a letter to the embassy written after the announcement, US Filipinos for Good Governance (USFGG) coordinator Eric Lachica raised the issue of a “one-week delay” in the mailing of 35,511 ballots for Filipino voters in the embassy’s jurisdiction. The USFGG forwarded a copy of the letter to Rappler.

The USFGG said that “voting by mail is supposed to enhance the voting process abroad and should not result in denying, limiting or restricting the ability of registered voters to vote within three weeks.”

“We seek transparency from the Comelec and the Department of Foreign Affairs to ensure that Filipino voters are not disenfranchised. The OAV (overseas absentee voting) timelines and procedures should be published and disseminated with adequate notice to the public,” Lachica added.

Migrante Europe also continues to reach out to the Philippine consulate in Milan, which has attributed delays to shipping difficulties.

The latest advisory from the consulate on the evening of April 11 (Milan time) said that election materials including ballots had not arrived at the consulate yet. It appealed to voters who wanted to personally pick up their ballots at the consulate to signify their intent to do so.

“Nangangamba kami na baka hindi sapat ang araw upang makaboto nang malaya at magdudulot ito ng problema sa aming mga kababayan,” said Pasion of Migrante Europe. (We are anxious because there may not be enough days to vote freely and this may cause problems to overseas Filipinos.)

Apart from the delays in shipments, the USFGG raised the “unresolved questions” of dealing with undelivered or returned election packets by the US Postal Service because of wrong mailing addresses of Filipinos who have moved residences since registering. “Can these voters who moved retrieve their ballots in person, fill them out and return them before the deadline of May 9, 2022?” Lachica asked.

The USFGG also pointed out that there was an “unreasonable” 24-hour application deadline for poll watchers, news media, and local community observers that ended on April 9, limiting the number of individuals able to apply to be observers.

The group recommended for the Philippine posts in the US to hold weekly virtual town hall meetings streamed on social media to update voters and let the media ask questions throughout the voting period.

In other parts of the world, some voters reported receiving ballots that were allegedly pre-shaded. This was denied in the case of overseas voting in Dubai, while in Singapore, the Philippine embassy admitted a spoiled ballot was handed to a voter but called it an isolated case.

Despite these issues, Comelec Commissioner Marlon Casquejo asserted that the launch of the Overseas Absentee Voting was generally peaceful and successful.

Over 1.6 million overseas Filipinos are registered to vote during the polling period, which ends on May 9. – Angel Ty/Rappler.com

Angel Ty is a Rappler intern studying in the University of the Philippines Diliman. This article was done under the supervision of Rappler staff and her copy was vetted by editors.