MANILA, Philippines – Ferdinand “Bongbong” Marcos Jr., who is leading the presidential race based on partial, unofficial results, faced his supporters past 11 pm Monday, May 9, to thank them for their support.

At the top floor of his campaign headquarters, where celebrations erupted, Marcos stood on a podium to face his family and a row of cameras, smiling. 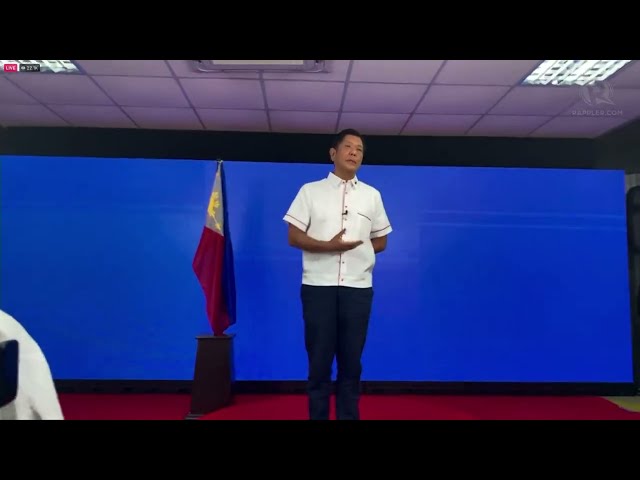 “We know that the count is not yet done, is not yet over, we still need to be on guard,” Marcos said in his first speech after elections.

“Kahit hindi pa tapos nga ang pagbibilang, hindi makapag-antay ang aking pasasalamat sa inyong lahat (Even if the counting is not yet over, I could not wait to thank all of you).”

After the 10-minute address, Marcos stepped out of the briefing room with his family and faced over a dozen staff members who queued for selfies and autographs.

“Maraming salamat sa inyong trabaho (Thank you for your work),” Marcos said as he signed the back of their shirts.

On the ground floor of the headquarters, the crowd kept swelling. From over a dozen earlier in the evening, the crowd ballooned to over a hundred by midnight, with some people carrying Philippine flags and placards that declared Marcos’ triumph.