MANILA, Philippines – Vice presidential candidate Walden Bello asked youth voters to “force” the tandem of Ferdinand “Bongbong” Marcos Jr. and Sara Duterte to join the debates being held for candidates in the 2022 elections.

“In the time remaining, before May 9, I would urge the youth to force Bongbong Marcos and Sara Duterte to participate in the debates. The country needs to know what they stand for and they are thinking at this point na (that), ‘Wow! We can get away with not presenting our programs to the people,’” Bello said during the “Pili Mo, Pili Ko, Pilipino!” Vice Presidential Forum on Friday, April 8.

According to Leody de Guzman’s running mate, Marcos Jr. and Duterte’s non-appearance in debates is the “ultimate insult” to voters.

Senator Kiko Pangilinan and lawmaker Lito Atienza did not attend the forum, but sent video messages that were played during the opening and closing of the event. Pangilinan was with his standard-bearer, Vice President Leni Robredo, for campaign activities in Pangasinan.

Duterte and Senate President Vicente “Tito” Sotto III did not give a response to the organizers.

The vice presidential bets who attended the forum also talked about their fellow candidates who skip debates. Bello, who always takes a swipe against Sara Duterte, hit the Davao City mayor anew and said Duterte has no clear platforms for the youth.

Marcos Jr. and Duterte have yet to attend an debate organized by the Commission on Elections (Comelec). Duterte, who is also leading in preelection surveys, had said that she will not join any debate. 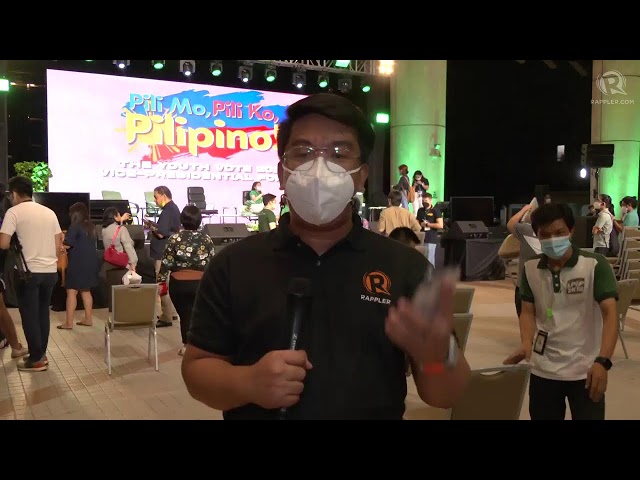 In the second segment of the forum, the candidates were asked about their stances on key issues, raising the YES or NO card in response.

Among the issues discussed was the lowering of the age of criminal liability. Only Lopez agreed with the proposal.

(My proposal is, 14 years old and above would have that mindful capacity to understand what is wrong and what is right. When it comes to addressing crimes, I believe that juvenile delinquents must have reformatory sanctions.)

The four vice presidential bets also agreed that victims of President Rodrigo Duterte’s drug war victims and other supposed abuses of the police and the military should receive reparation. David, on the side, noted that President Duterte is the first person who should be held accountable for the bloody drug war.

After thousands of deaths were recorded from the drug war, the International Criminal Court formally opened an investigation into it in 2021. Rights groups say over 7,000 were killed in Duterte’s drug war.

The forum, held at the De La Salle University (DLSU) Henry Sy Sr. Grounds was organized by the Task Force Safe Schools together, DLSU Committee on National Issues and Concerns, and the La Salle Institute of Governance. – Rappler.com