CHALLENGES AHEAD. Presumptive president Ferdinand Marcos Jr. speaks to the media after meeting with various diplomats on May 23, 2022. Alecs Ongcal/Rappler

Facebook Twitter Copy URL
Copied
A report on the Philippines' human rights situation and enjoyment of GSP+ privileges will take place this year, the first under the Marcos administration

MANILA, Philippines – European Union officials are counting on the incoming administration of Ferdinand Marcos Jr. to address concerns over human rights, the rule of law, and blows to democracy that would be left behind by the Duterte administration. They again said the Philippines’ continued enjoyment of trade perks hangs in the balance.

During a European Union (EU) Parliament human rights subcommittee meeting on Wednesday, June 15, EU lawmakers and officials expressed particular concern over the lack of transparency and accountability in Duterte’s drug war, and the attacks on a free press and dissenting voices. They likewise voiced concern about disinformation networks and the prolonged detention of opposition figure Senator Leila de Lima. 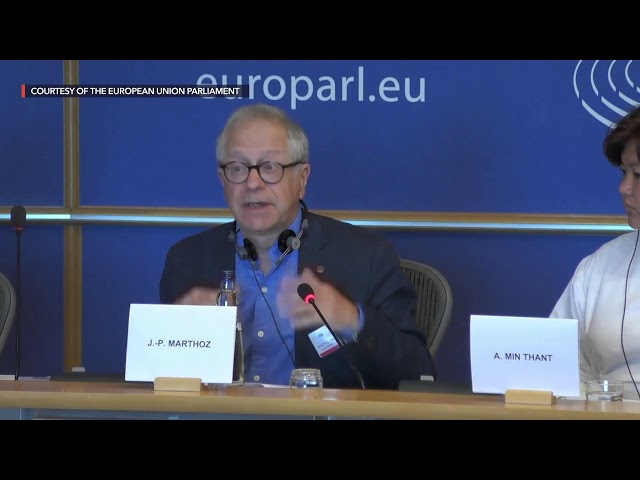 If these concerns are not meaningfully addressed by the Marcos government, European lawmakers want the revocation of the Philippines’ trade perks and market access under the Generalized Scheme of Preferences Plus (GSP+). This intent was already formalized by the EU Parliament last February.

Under the GSP+, the EU removes import duties from products from developing countries which are entering the EU market.

Mark Gallagher, deputy head for Southeast Asia of the European External Action Service, told the subcommittee about his agency’s visit to the Philippines in February to March. During that visit, they told Duterte government officials about their concerns over the drug war, red-tagging, media, freedom of expression, the death penalty, and more.

“The EU conveyed a message of urgency to the Filipino authorities to address all these issues and concerns, and that is our key message to the new administration,” he said.

“The effective implementation of international commitments on trade and sustainable development forms the basis of the Philippines’ privileged access to the EU market,” he added.

Gallagher specifically mentioned how the EU was closely watching the government’s respect for rights to due process of Rappler CEO and Nobel Laureate Maria Ressa and Senator De Lima.

He noted how De Lima’s five-year detention has been recognized as “arbitrary” by the United Nations as Duterte’s Justice Secretary Menardo Guevarra has said he would not withdraw charges against the senator.

“We took note of yesterday’s announcement of a panel of Department of Justice prosecutors that there is, quote, ‘good reason to continue her prosecution,'” said Gallagher.

Hoping that the Marcos administration will “now act appropriately,” Gallagher said De Lima’s right to due process
“must be respected.”

A body reviewing the Philippines’ human rights situation in relation to the GSP+ will report to the EU Parliament anew in the second half of 2022, the first such review under the Marcos administration.

Hannah Neumann, an EU Parliament member from Germany and vice-chairperson of the human rights subcommittee, wants EU officials to visit the Philippines before this report.

“I would strongly suggest, given the bleak outlook we have at the moment on the current leadership that we do a joint ad hoc mission to the Philippines in the second half, a short one, to just check on how things are before we are comfortable to comment on the commission proposal and to get our own sense of this,” she told the meeting.

The visit, she said, could also be an opportunity for EU lawmakers to send a message to the Marcos administration that, while he won the elections resoundingly, “from our side, he cannot just walk over human rights and minority rights and expect us to cover up and continue to give the country privileges.”

Dumpit, responding to a question about how Marcos could be different from Duterte, said the presumptive president could undertake “confidence-building” measures to restore trust and live up to his promise of “unity and reconciliation.”

First, she said, Marcos should “reach out” to human rights victims of his father’s dictatorship and ensure they get the reparations promised to them by law. Second, Marcos should ensure accountability for abuses during his predecessor’s drug war which have “surpassed, in terms of scale and pace of killings, the first Marcos administration,” said Dumpit.

“Low-lying fruits” for building confidence would also include Marcos doing away with any agenda to restore the death penalty and lowering the age of criminal liability – efforts pursued by Duterte.

Why GSP+ matters to Marcos

The GSP+ is a set of economic perks the Philippines has been enjoying since 2014. It would be a blow to Marcos if these were to be temporarily withdrawn during his presidency, especially at a time when economic recovery from the pandemic is a priority for Filipinos.

In 2020, 26% of the total Philippine exports to the EU enjoyed preferential treatment under the GSP+ scheme.

To continue getting these trade perks, the Philippines has to adhere to 27 international conventions on human and labor rights, the environment, and good governance.

The EU is the Philippines’ 4th largest trading partner, accounting for almost 9% of the country’s total trade in 2018 (after China, Japan, and the US). – Rappler.com