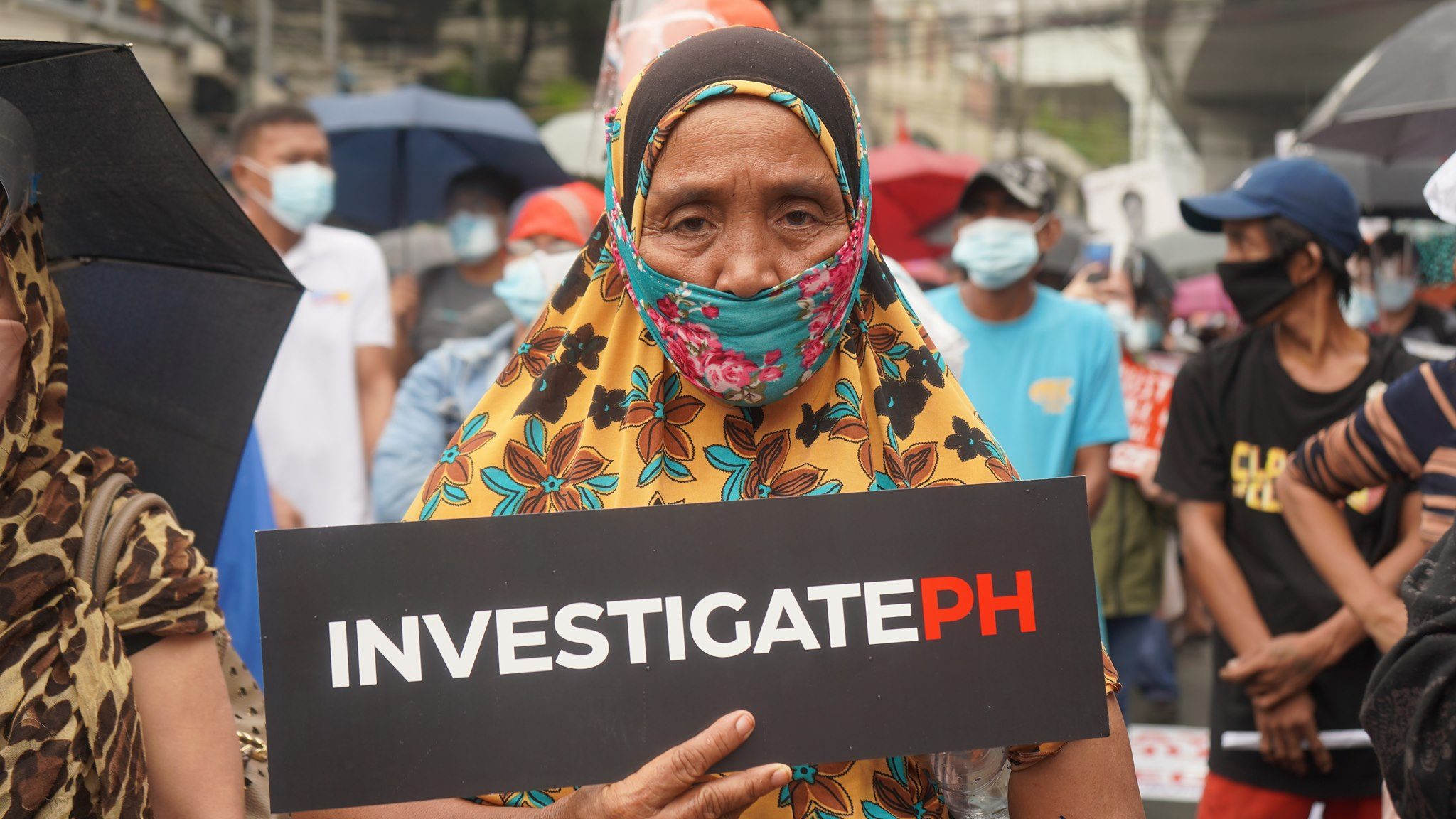 GLOBAL PROBE. International coalition Investigate PH aims to prove that there is no adequate domestic remedies for the killings in the Philippines.

Civic leaders all over the world will be upping the pressure on the Duterte government as they launch an independent investigation into the killings of drug suspects, lawyers, and activists, aimed to push the International Criminal Court (ICC) to take the pivotal next step in the Philippine case.

“The ICC Preliminary Examination of complaints about the war on drugs killings and other killings in the Philippines during the Duterte Presidency is ongoing after almost 3 years, and remains open to receiving new information, which the INVESTIGATE PH project is able to provide,” American lawyer Jeanne Mirer, President of the International Association of Democratic Lawyers (IADL), told Rappler.

Mirer is a commissioner of Investigate PH, an international coalition, which launched in North America and Europe via Zoom on Tuesday, January 26.

It targets to publish a preliminary report by the end of February or the first week of March, according to Patricia Lisson of the International Coalition for Human Rights in the Philippines (ICHRP) in Canada.

“Since President Rodrigo Duterte came to power in the Philippines, we have been alarmed, shocked and appalled by this human rights crisis and the repression of peoples’ movements,” said Suzanne Adely of the US-based National Lawyers Guild.

The coalition will send its findings to the ICC which is at the last stretch of its preliminary examination into the Philippines.

Fatou Bensouda, the current Chief Prosecutor for the ICC, said she has found “reasonable basis to believe” that crimes against humanity were committed in Duterte’s war on drugs but has not decided yet whether to open the formal phase of investigation, where arrest orders and summons could be issued.

To open an investigation, Bensouda must determine that there was no sufficient investigation and prosecution in the local Philippine system.

This is what Investigate PH means to prove.

“The United Nations (UN) Technical Assistance Program is being set up now on the assumption that the Philippine domestic remedies for cases of human rights violations are adequate, only needing better resourcing and training. We are certain this assumption is wrong,” Mirer said.

Mirer was referring to the slammed watered down resolution of the UN Human Rights Council that offered technical assistance to the Philippine government, instead of doing its own independent investigation of the killings.

The UN HRC resolution cited efforts of the Department of Justice (DOJ) in shielding the Duterte government from tighter scrutiny.

DOJ has not been ‘open’

But former Australian senator Lee Rhiannon said the DOJ has not been very open in the past.

“While on a High Level Human Rights Delegation in December 2019, I found the Commission on Human Rights (CHR) was accessible and genuinely concerned about the terrible situations we saw. We were able to meet members of Congress also. But the Deparment of Justice, for example, was not open to meetings,” Rhiannon told Rappler.

Justice Secretary Menardo Guevarra said the DOJ “never received any request for a meeting with Senator Lee Rihannon during her visit in December 2019.”

“The Australian embassy will confirm that no such meeting with the DOJ was ever arranged or requested by Senator Rihannon’s delegation,” Guevarra told Rappler in a message on Wednesday.

The DOJ has submitted a partial report of its drug war review, but has yet to make their findings public. The review reinvestigated the more than 5,000 deaths in police anti-drug operations.

The CHR has also complained that the DOJ excluded them in the hyped drug war review panel, contrary to Guevarra’s promise to the UN HRC that the CHR will be involved. (WATCH: Did the DOJ mislead in drug war review?)

Given the lack of access to official documents, ICHRP chairperson Peter Murphy said “we rely on speaking directly to the witnesses and families of victims of extrajudicial killings, detention on trumped up charges, red-tagging and other forms of repression.”

The coalition is working with local sources like the National Union of Peoples’ Lawyers (NUPL) and rights group Karapatan. – Rappler.com