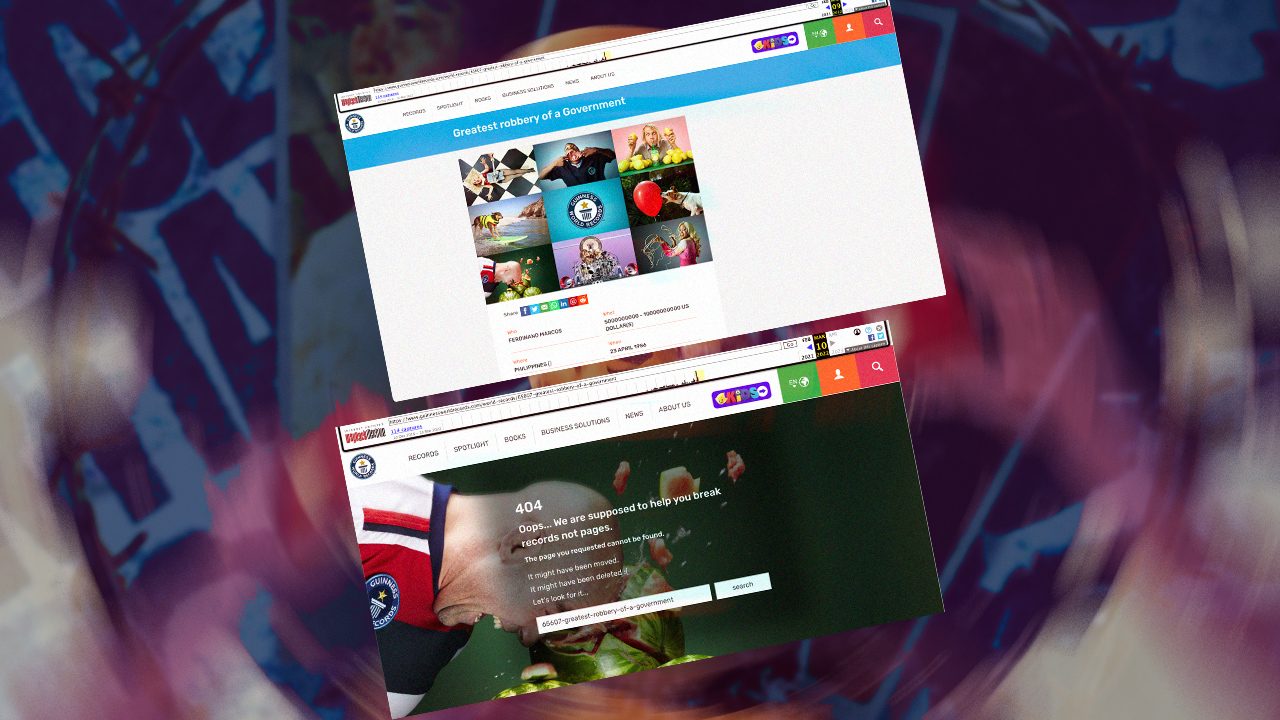 Records from Wayback Machine, a website that stores internet archives, show that the page was still up on the GWR website as of Wednesday, March 9, 2022, at 3:39 pm Philippine time. As of March 10, at 12:06 pm, the page rendered a 404 error, or Page Not Found. The page still shows the same error as of press time.

“The government of the Philippines announced on April 23, 1986 that it had succeeded in identifying $860.8 million salted away by the former President Ferdinand Edralin Marcos (1917–89) and his wife Imelda. The total national loss from November 1965 was believed to be $5–$10 billion,” GWR cited on its website.

“Ferdinand and Imelda Marcos fled to Hawaii, USA, in 1986, where the former president died. Imelda Marcos returned to the Philippines in 1991, and was found guilty of corruption in 1993. However, Imelda Marcos was cleared of all charges on appeal in October 1998. The Philippine Supreme Court acquitted her, setting aside a 12-year jail sentence. The decision – by a majority of 8-5, with 1 abstention – reversed a January ruling by the Supreme Court on her 1993 conviction by a lower court,” it added.

Sought for comment, Guinness World Records told Rappler on Friday, March 11, that they were reviewing the entry to “ensure its accuracy.”

“GWR takes very seriously, now more so than ever, our responsibility to be a source of reliable, accurate information,” Amber-Georgina Gill, head of publishing and brand communications, said in an email.

“Any record which has not been recently researched and verified by independent sources will be re-examined to ensure its accuracy, as well as its compatibility with GWR values and the values of the audiences we serve,” she said.

Many other records prove the ill-gotten wealth of the Marcoses.

In 2018, the anti-graft court Sandiganbayan convicted Imelda Marcos of seven counts of graft related to private organizations created in Switzerland while she was a government official from 1968 to 1986. She is out on bail.

At the end of 2020, the Presidential Commission on Good Government (PCGG) reported that they had recovered P174.2 billion in Marcos ill-gotten wealth, while running after P125.9 billion more in ill-gotten wealth by the Marcos family.

In 2021, the Sandiganbayan ordered the turnover of Marcos loot amounting to P1 billion to the Philippine government. Many netizens have pointed out the disappearance of the record from the GWR website, asking what happened to the web page and calling the incident a “historical distortion” of the Marcos dictatorship.

Meanwhile, some netizens claim the record was removed because it was “false information”.

Prior to this, data studied by Rappler showed that, to stage a comeback in Malacañang, the Marcoses had resorted to disinformation, coordinated amplification, and an extensive network of anonymously-managed pages and groups with narratives that distorted history.

Ferdinand “Bongbong” Marcos Jr., son of the dictator, is gunning for the presidency in the 2022 elections. – Rappler.com