Inspired by the Maginhawa Community Pantry project, labor group Defend Jobs Philippines set-up the “Matimyas Workers Pantry,” a community pantry along Matimyas Street in Sampaloc, Manila on Monday, April 19, 2021. The labor group community pantry aim is to call on the national government to be sensitive and compassionate enough to the country's workers who have been affected by the COVID-19 pandemic and the continuing lockdown and community quarantine impositions. Defend Jobs Philippines also demanded the immediate distribution of adequate aid for the workers and for the protection of job security, higher wages and health and safety. To help sustain the Matimyas Workers Pantry, the group will accept in-kind and cash donations at their drop-off center at 2011 B Matimyas Street, Sampaloc, Manila. Rappler

Malacañang sees only good things in the rise of community pantries and refuses to see it as an indication of any failure of its programs to alleviate suffering amid the COVID-19 pandemic.

“I don’t see that as condemnation of government. It simply shows the best in us during the worst of times,” said Presidential Spokesman Harry Roque on Monday, April 19, in a mix of English and Filipino.

The week before, citizens started putting up community pantries or carts stocked with food, hygiene products, masks, alcohol, and other basic necessities to help out members of their community who have lost income due to the pandemic.

Politicians and netizens have since said the adoption of community pantries in places as far as Baguio City indicate gaps in the government’s aid distribution program.

(We disagree. We think these community pantries show that bayanihan spirit reigns, not bickering.)

He praised community pantries as a “showcase of the best in Filipino character” and saluted the Filipino spirit for its tenacity despite great challenges. 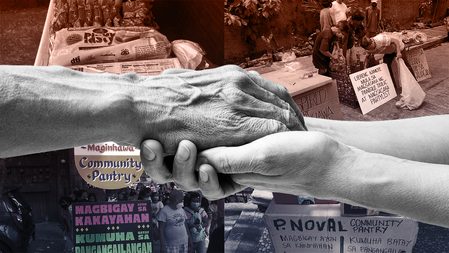 Pressed to comment on the status of the distribution of P1,000 in aid to low-income individuals during the recent two-week enhanced community quarantine, Roque admitted there have been delays.

“Naghihingi po tayong paumanhin dahil may kabagalan (We ask for your patience over the slowness),” said Roque, adding that only P4 billion out of P23 billion worth of aid have reached beneficiaries.

He blamed pandemic health protocols for the delay.

“Even in the distribution of aid there needs to be social distancing, this is the reason why there is a delay in distributing assistance,” said Roque.

Yet, in 2020, the Department of Interior and Local Government had promoted their use of bank systems and transfers that reduced gatherings where cash subsidies were given in person.

One community pantry that became viral and was then replicated was the one in Quezon City put up by Patreng Non. In media interviews, she said she did it because she was “tired of complaining” and “tired of inaction.” Days later, Senator Panfilo Lacson commented in a DZBB radio interview that the increasing number of community pantries is a “sign of desperation”  and an indication that “people can no longer rely on government to help them.”

Former vice president Jejomar Binay echoed the sentiment in a tweet: “The message behind the rise of community pantries is simple: when government is absent, we can look after each other.” – Rappler.com