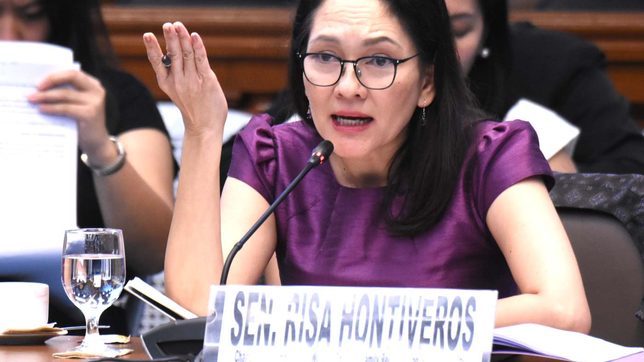 Facebook Twitter Copy URL
Copied
'China has stolen from us, and now she is lying to us,' says opposition senator Risa Hontiveros

China is “gaslighting” the Philippines by “lying” about its military presence near a reef in the West Philippine Sea, opposition senator Risa Hontiveros said on Wednesday, March 24.

“China is gaslighting us. Pinapalabas ng Tsina na tayo ay nagha-hallucinate. Nakakapagod ang patuloy nilang pagbabaluktot ng katotohanan para sa sarili nilang interes. China has stolen from us, and now she is lying to us,” said the opposition senator in a statement on Wednesday.

(China is gaslighting us. China is making it appear as if we are hallucinating. We are tired of their attempts to twist the truth for the sake of advancing their self-interests. China has stolen from us, and now she is lying to us.)

The Philippines has filed a diplomatic protest against the presence of 220 Chinese vessels near Julian Felipe Reef (Whitsun Reef) in the Kalayaan Island Group, which is within the Philippines’ exclusive economic zone.

The Philippines’ National Task Force for the West Philippine Sea earlier said it believed the vessels massed near Julian Felipe Reef are manned by Chinese maritime militia, but China denied this and denounced the claim as an “unnecessary irritation.”

“The existence of Nansha district alone is illegitimate. How dare the Chinese embassy say that we are the ones causing ‘unnecessary irritation?’ Tsina ang naglabag ng batas, bakit Pilipinas ang mag-aadjust (China is the one that broke the law, why should the Philippines be the one to adjust)?” asked Hontiveros.

The senator was referring to the establishment of so-called “administrative districts” in the South China Sea, which the Philippines had protested  in April 2020 as an illegal act.

For Senator Richard Gordon, China’s “coercive” actions in the West Philippine Sea run contrary to its claims of goodwill towards the Philippines.

“The Chinese government’s coercive and destabilizing actions in the West Philippine sea and the South China sea are acts that belie its pronouncements of friendship and goodwill and affinity with the Filipino people,” Gordon said in a statement.

He urged China to use peaceful means to settle its dispute with the Philippines instead of resorting to intimidation tactics.

“I would urge our good neighbor, the Chinese government in particular, to adopt policies and actions that contribute to peace and stability in the region, and not create an impression of a bullying neighbor,” said Gordon.

Senator Francis “Kiko” Pangilinan also slammed China, accusing it of using the coronavirus vaccines it donated to the Philippines as a “geopolitical weapon.” The second shipment of China’s vaccine donation to the country arrived on Wednesday, amid renewed tensions in the West Philippine Sea.

(With these 220 Chinese militia boats in the Julian Felipe Reef in the West Philippine Sea, isn’t China using its donated vaccines as a ‘geopolitical weapon’?)

He backed the Philippine government’s demands for China to withdraw its ships. “We are behind the government in asserting our rights in our seas. We may not be as strong militarily but we are certainly strong legally, morally, and diplomatically,” said Pangilinan.

In 2016, the Philippines won its historic tribunal case against China, as an international tribunal junked China’s expansive claim over the South China Sea.

But no less than Philippine President Rodrigo Duterte himself downplayed this victory, claiming that insisting on the Philippines’ legal victory would only spark war with the regional giant. – Rappler.com