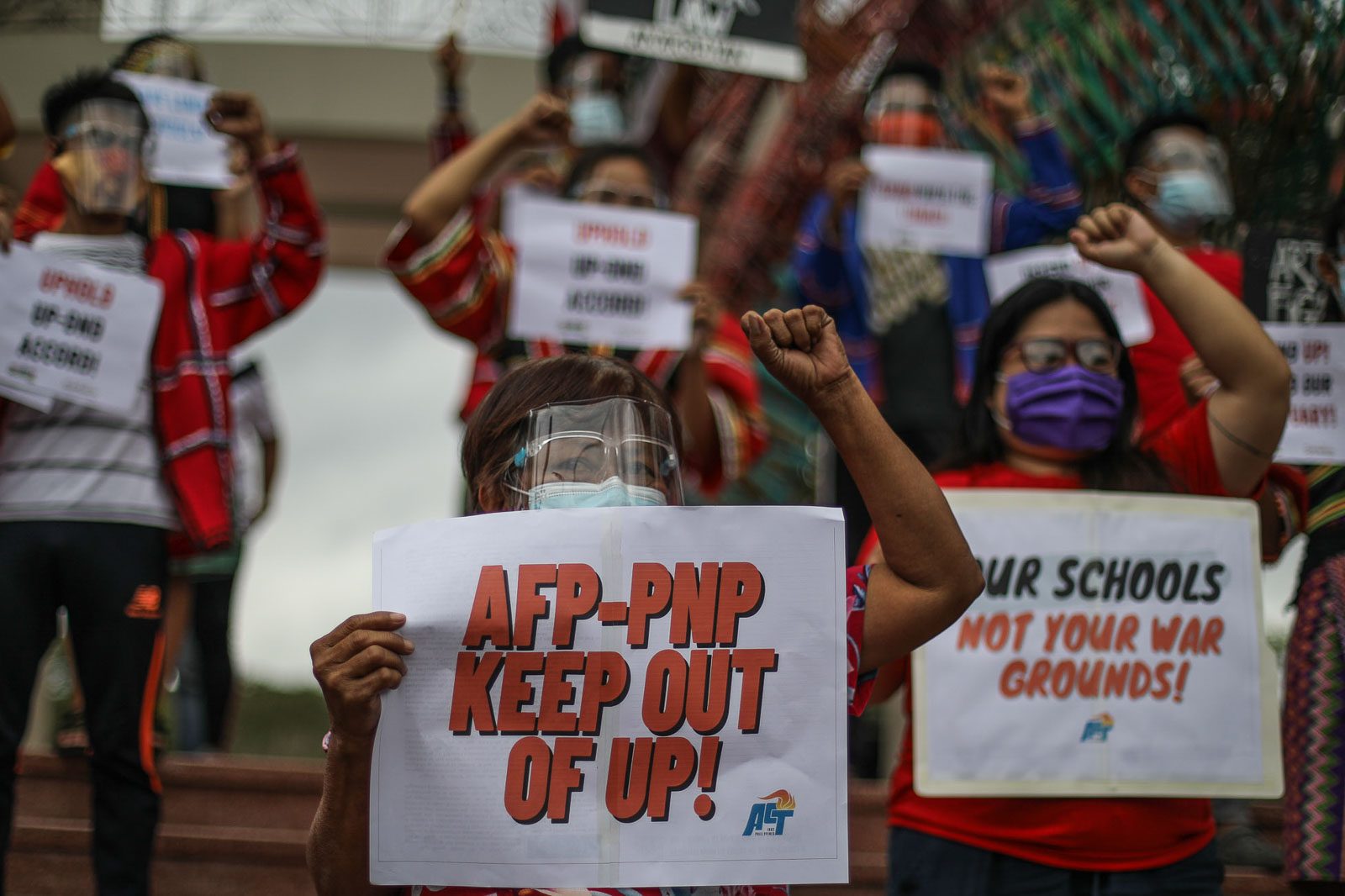 'KEEP OUT OF UP.' The UP community stages a protest at the Quezon Hall of UP Diliman in Quezon City on January 19, 2021 to denounce the termination of the 1989 UP-DND accord

Facebook Twitter Copy URL
Copied
Albay 1st District Representative Edcel Lagman argues that by terminating the accord, it is now 'open season' for state forces to invade UP campuses

Opposition lawmaker Edcel Lagman is calling for a House probe into what he called the “illegal” termination of the agreement that limited the entry of state forces into the University of the Philippines (UP).

The Albay 1st District congressman filed House Resolution (HR) No. 1490 on Tuesday, January 19, but his office sent reporters a copy of the document on Wednesday, January 20.

In filing HR 1490, Lagman asked the House committee on human rights to investigate the abrogation of the 1989 UP-DND accord, calling the move of Defense Secretary Delfin Lorenzana “illegal” and “void ab initio” or void from the beginning because the Department of National Defense (DND) did not consult UP as per the provisions of the agreement.

Lagman, a veteran congressman who is challenging the anti-terrorism law before the Supreme Court, said terminating the UP-DND pact puts students at risk.

“With the unilateral termination of the subject agreement, it is now open season for the military and police invasion of UP campuses in the guise of upholding national security and maintaining peace and order,” Lagman said in his resolution.

He said Lorenzana violated academic freedom, civil liberties, and constitutional rights when he decided to unilaterally scrap the UP-DND accord. This was the same argument of 7 senators when they filed their own resolution opposing the termination of the agreement.

Lagman argued that this is more worrisome since the government decided to terminate the agreement following the enforcement of the anti-terror law, which is widely feared as a government tool to crack down on government critics.

Critics like Lagman have warned that the law is prone to abuses, as it broadens the definition of terrorism while reducing the restrictions on law enforcement agents who would carry out the arrests.

The progressive Makabayan bloc lawmakers also filed their own resolution on Wednesday asking the House of Representatives to express its sense to “uphold the 1989 UP-DND accord and the academic freedom of all educational institutions.”

“The unilateral abrogation of the 1989 UP-DND Accord and the looming militarization of campuses nationwide undermine academic freedom, and threaten the right to life, liberty, and security and freedoms of speech, of expression, and of peaceful assembly,” the Makabayan bloc said in their resolution.

“Schools should be safe spaces and zones of peace that are free from police and military presence and intervention, harassment, and intimidation,” they added.

Lorenzana has justified the abrogation of the deal by claiming that UP campuses have become a “breeding ground” for extremists.

But Vice President Leni Robredo, Lagman’s party mate in the once-ruling Liberal Party, said that under the pact, authorities only need to give notice to university officials prior to operations.

UP President Danilo Concepcion already said that the abolition of the UP-DND accord is “totally unnecessary and unwarranted.

The UP-DND accord was signed in 1989 to prevent a repeat of the warrantless arrest of Donato Continente, a staffer of the UP campus publication Philippine Collegian, inside Vinzons Hall on June 19, 1989.

Continente was convicted in the April 1989 murder of US army Colonel James Nicholas Rowe and was supposed to serve a life term but the Supreme Court later reduced his sentence to 14 years after it ruled that he was only an accomplice. Continente maintained his innocence upon his release in 2005 and said he was tortured to admit to a crime he did not commit. – Rappler.com