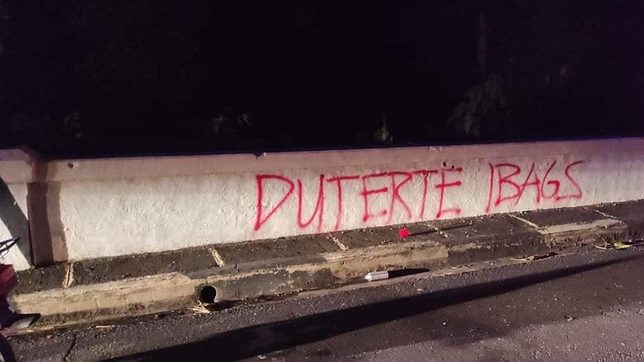 KILLED. Two activists from Albay were reportedly killed by cops while writing a protest slogan on Monday, July 26.

Albay cops reportedly killed two activists who were spray-painting a public property with a protest slogan on Monday, July 26, apparently in time for President Rodrigo Duterte’s State of the Nation Address on the same day.

According to rights group Defend Bicol Stop the Attacks Network, the following were gunned down by personnel of the Albay police early Monday morning in Barangay Lower Binogsacan in Guinobatan town:

A photo shared on Facebook by Bicol.PH, a local news organization based in the region, shows the unfinished slogan written by the two activists. It reads, “Duterte ibags” (Duterte Ibagsak/Oust Duterte).

Defend Bicol said the two activists were writing the slogan on Banao Bridge as part of their Operation Pinta when the cops rained bullets on them. Vandalism is a crime, the police said.

The official report of the Bicol regional police said the activists fired on the patrolling cops, prompting the police to fight back and kill the activists. The Bicol police recovered one caliber .45 gun, one .38 revolver, an unregistered motorcycle, and empty slugs. The police said the incident occurred at around 1 am.

In a Facebook post, Defend Bicol condemned the killing: “Dissent may take on many forms, but to kill innocent unarmed civilians in the dead of the night for painting the people’s call is purely fascist and brutal.”

Palero and Naperi’s deaths are the most recent recorded killing of activists in the country, after the Bloody Sunday raids in Calabarzon, where nine activists were killed, and the assassination of labor leader Dandy Miguel.

According to the tally of rights group Karapatan, there are at least 414 victims of extrajudicial killings in the country since President Rodrigo Duterte rose to power in June 2016 up to July 2021. With these hundreds of killed individuals, 211 were activists. – Rappler.com