JUSTICE. Photos of drug war victims are displayed during a Mass. 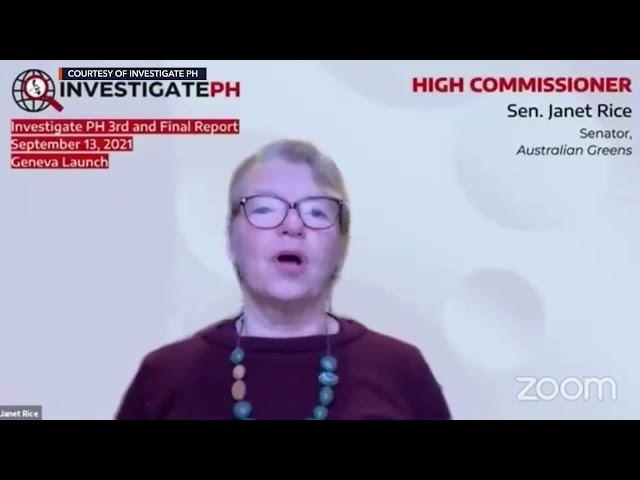 The United Nations Human Rights Council (UN HRC) must immediately initiate an independent investigation into the widespread violence under President Rodrigo Duterte, especially given the lack of accountability in the Philippines.

Global coalition INVESTIGATE PH on Monday, September 13, said its final report on the Philippine situation is meant to “keep the pressure up” on the UN body as it begins its 48th regular session.

“It’s going to increase the pressure on the UN to actually seriously realize that they’ve got to do more and they cannot just leave it where they left in June 2020,” high-level commissioner and Australia Greens Senator Janet Rice said.

“The evidence compiled in this report shows that things have not improved since, it has gotten worse,” she added.

The report, the 3rd released by the coalition, examined the civil and political rights allegedly violated by the Duterte administration. It also found that the militaristic response to the coronavirus pandemic “only exacerbated economic hardships” of Filipinos.

“The evidence [we] have been presented with have been overwhelming, at times being tough listening to but obviously nothing like the suffering so many Filipinos endure under the state terror that has become the hallmark of the Duterte regime,” former Australian senator and INVESTIGATE PH commissioner Lee Rhiannon said.

The report comes weeks before UN rights chief Michelle Bachelet is expected to update the UN HRC on the implementation of its technical assistance given to the Philippine government.

The assistance came from a resolution passed by the council in 2020, which was tagged as weak by rights groups given the dire situation in the country.

“It is imperative that the [UN HRC] heed the Filipino people’s call to conduct a probe on the rights violation under the Duterte administration amid impunity and failure of domestic mechanisms to provide redress to victims and hold perpetrators accountable.” Jeanne Mirer of the International Association of Democractic Lawyers said.

Government data shows that at least 6,181 suspected drug personalities were killed in police anti-illegal drug operations as of July 31, while groups estimate between 27,000 to 30,000, to include victims of extrajudicial killings.

“There has been a total failure of domestic remedies to address the abuses,” Rhiannon said.

“We believe that the international community has a responsibility to help [find accountability] over the crimes,” she added.

For many families of victims and rights groups, international mechanisms are the only way to get justice for the thousands killed in the Philippines.

One of these mechanisms is the International Criminal Court, whose pre-trial chamber is expected to decide soon whether or not to allow a formal investigation into alleged crimes against humanity committed in the name of Duterte’s war on drugs.

The ICC Registry recently found that victims and their families “overwhelmingly support” an investigation.

INVESTIGATE PH high-level commissioner Chris Ferguson believes that its report will further support the moves of the ICC.

“We’re reinforcing an effort, and international pressure and response is not just rhetoric, but is using all mechanisms at our disposal,” Ferguson, also of World Communion of Reformed Churches, said.

“Stop the killings, stop the repression, stop the red-tagging, stop the suppression of the rights of people, but start an accountable process for peace and dialogue,” he added. – Rappler.com