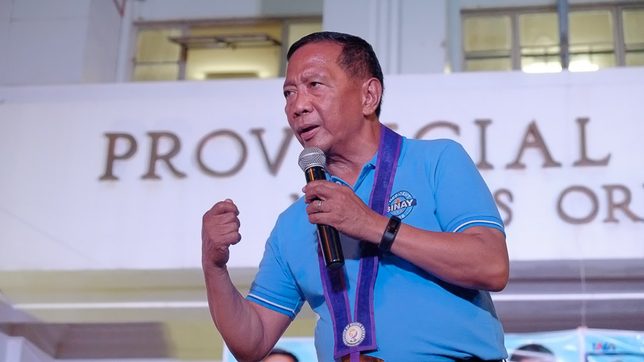 Facebook Twitter Copy URL
Copied
It's a rare statement of defense from the Binay family patriarch, whose clan has had a complicated relationship with Rappler over the years

On Monday, October 11, Binay said Ressa’s Nobel win is a “recognition of the courage of every Filipino journalist.”

“Press freedom has been under siege for the past five years. But when journalists persevere under a state of siege, it is because they choose to assert rights, not because the administration allowed them. It is a credit to their courage and fealty to their calling,” said Binay.

This is a rare statement of defense in favor of Rappler coming from Binay himself, whose family has had complicated relationship with Rappler over the years. The Binays have previously accused Rappler of treating them unfairly at the height of the corruption accusations thrown at the family patriarch and other members of the clan.

But when Ressa was arrested for cyber libel in 2019 for a story she did not write nor edit, Jejomar’s daughter and Senator Nancy Binay was among those who denounced the continuing harassment of Ressa and Rappler by the Duterte regime.

“We have fought hard to regain press freedom, and Philippine media has never been more under threat as it is now since 1986. Freedom of the press is one of the hallmarks of democracy – and crippling the messenger does not make a thousand messengers broken,” Nancy Binay said in February 2019.

Ressa and Russian journalist Dmitry Muratov were awarded the Nobel Peace Prize for 2021 in recognition of the role of a free press in modern times.

The Binay patriarch, the longtime lord of Makati before he became vice president in 2010, is seeking his political comeback as senator in the 2022 elections.

He went out of public eye after his successive electoral losses. In the 2016 presidential race, he lost to Rodrigo Duterte. In 2019, ally-turned-foe Kid Peña stunned him in the fight for Makati 1st District’s congressional seat.

But Binay has since reemerged as an opposition figure against Duterte, whom the former vice president had called an “executioner”  in the final days of the 2016 campaign.

A human rights lawyer who fought the Marcos dictatorship, Binay has repeatedly hit Duterte’s mismanagement of the coronavirus pandemic and has criticized the “creeping erosion of civil liberties” under the President. – Rappler.com