PENSION REFORM. Soldiers of the Armed Forces of the Philippines

A House ad hoc committee is pushing for a reform bill that will not require military and uniformed personnel (MUP) to pay for their pension.

At the MUP pension reform bill hearing, House ways and means panel chair Joey Salceda, who also sits as chair of the House ad hoc panel on MUP, said he was proposing a new reform bill instead of what was originally proposed under House Bill (HB) No. 9271.

Based on the discussions, the main similarity between the yet-to-be-filed bill and HB 9271 is the removal of indexation. The current system of indexation pegs the amount of pension received by retirees to the current salaries of active personnel.

Under the new bill, which will be used to substitute for HB 9271, the following terms are also proposed:

According to the actuarial study of the Government Service Insurance System (GSIS), the total unfunded liability for the current MUP pension system is at P9.6 trillion.

Under the current scheme, MUPs do not pay for their pensions. Upon retirement at 56 years old or when MUPs reach at least 20 years of service, they get a higher rank, and pensions are pegged to the current salaries of the active personnel.

Another P589 billion will also be slashed from the liability if MUPs are to be required to pay for their pensions, but Salceda said the amount is “nothing” compared to the huge reduction from scraping indexation.

“If you really give up indexation and [the eligibility to receive a pension after] 20 years, that solves – from Pareto principle – the whole problem. The contribution is actually just a P589-billion [reduction] in the entire period,” said Salceda.

Defense Secretary Delfin Lorenzana agreed with the proposal and added that he is amenable to make the pensionable age – or the age when MUPs can start receiving pensions – at 60 years old. Other MUP officials did not comment on the matter during the hearing.

Lorenzana said that the department is currently drafting a proposal to make 60 years the pensionable age.

The proposed House reforms departed from the proposals being heard at the Senate which includes mandatory contributions for MUPs.

Senate Bill No. 1419, which is backed by the finance and budget departments, nixes indexation for new entrants, imposes mandatory contributions, and creates a Military and Uniformed Personnel Retirement Fund to manage the fund.

If the House bill passes, this also means a win for advocates who are against the pension reform proposed by economic managers.

Salceda said the House will approve its version of the measure before national budget hearings. But what’s left to be seen is whether the upper chamber will heed House’s proposal. 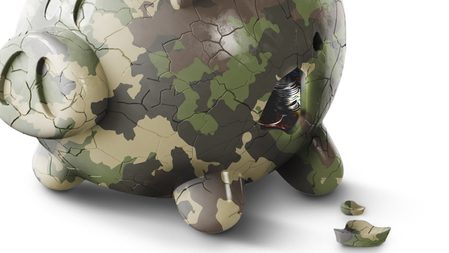 During Monday’s hearing, panel members also proposed to earmark the proceeds from the sale and use of MUP assets, as well as the Ninoy Aquino International Airport (NAIA) and the New Bilibid Prison, for the modernization program of the military and the police.

Initially, there were discussions to sell military assets for the seed fund of the MUP pension.

Salceda said military assets should be used for modernization instead, in addition to other government assets, if the goal is to “adopt a strong posture in the West Philippine Sea.”

“I’m looking only at the pension and how the general economy can help so it should not come from internal resources already coming from the military,” said Salceda.

“We keep saying we want to have a credible defense system. In truth, we have the lowest military personnel per capita in ASEAN. We have one of the oldest fleets in the region. We have to invest in our active forces and in military capability if we will adopt a strong posture in the West Philippine Sea,” the Albay congressman said.

While Lorenzana appeared to be happy with Salceda’s proposal, finance officials at the hearing said they will have to get the backing of Finance Secretary Carlos Dominguez III first. – Rappler.com