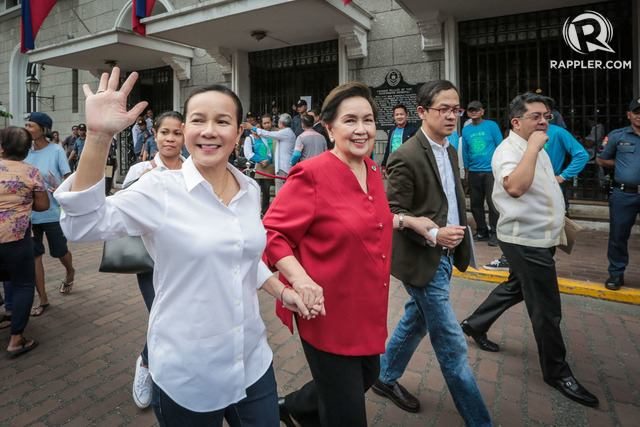 MOTHER AND DAUGHTER. In this file photo, Senator Grace Poe is joined by her mother, veteran actress Susan Roces, in filing her candidacy for Senate reelection on October 15, 2018.

Facebook Twitter Copy URL
Copied
It's an issue close to their hearts, as Senator Grace Poe is the adoptive daughter of the Philippine film icons Susan Roces and Fernando Poe Jr.

MANILA, Philippines – Senator Grace Poe said it was “symbolic” that her final phone conversation with her late mother, renowned veteran actress Susan Roces, was the passage of the foundling law that both of them have championed for.

Facing reporters on the sidelines of her mother’s wake on Saturday night, May 21, Poe said she excitedly called her mother last Tuesday, May 17,  upon learning that President Rodrigo Duterte has already signed into law the bill recognizing foundlings as natural-born Filipinos.

It’s a gut issue for the senator, a foundling who had to face an intense challenge to her Filipino citizenship when she ran but lost for president in the 2016 elections. Poe is the adoptive daughter of Roces and Philippine film icon Fernando Poe Jr., who also sought the presidency in 2004. Poe would later win her citizenship case before the Supreme Court.

In her last phone call with her Roces, Poe recalled that her mother congratulated her for the passage of the foundling law. But she credited her mother for working tirelessly to ensure foundlings like her would be duly recognized as Filipinos.

Poe considered their last conversation to be “symbolic,” because it seemed her mother waited for the passage of the foundling law before bidding them goodbye.

Soon after they dropped the call, Roces was rushed to the hospital as she complained about experiencing pain.

Poe admitted she has been sensing something was wrong with Roces these past two weeks, as the usual hour-long conversations with her mother have been reduced to 10-minute conversations. Roces sounded like she was having trouble breathing over the phone. She was also barely eating.

(That was our last conversation that’s why it was so symbolic. It’s like she waited for it. But after that, when we brought her to the hospital, she wasn’t herself anymore, and she was complaining that she was in pain.)

Roces also told Poe to have their house in Baguio City fixed, so the grandchildren can visit.

Though she is grieving the loss of her mother, Poe said she is also happy knowing Roces has finally reunited with the latter’s husband and parents. Poe said her mother had lived a full life

(Of course we are sad, but we’re also thinking that there’s no more pain, no more suffering for her, and most of all, she’s with her parents and my father now. He’s really her true love.)

She made her film debut in 1952, starring in the movie Mga Bituin ng Kinabukasan. As her acting career picked up in the ’50s, she earned the nickname “Queen of Philippine Movies.”

True to the title, she would continue to make films through the decades, starring in iconic Filipino movies such as Ang Daigdig Ko’y Ikaw, Gumising Ka Maruja, Patayin Mo sa Sindak si Barbara, and Mano Po.

Until her death, she played the role of Lola Flora in the long-running ABS-CBN series Ang Probinsyano.

Roces won several awards throughout her career, including multiple FAMAS Awards, the first being for her performance in the film Maligno.

Local celebrities, friends, and co-stars have been expressing their condolences to the family Roces has left behind, remembering her for her legacy in Philippine cinema and the kindness she has showed them when she was alive.

Senate President Vicente Sotto III, a comedian and actor before entering politics, penned a resolution on Sunday, May 22, seeking to express the chamber’s profound sympathy and sincere condolences on Roces’ passing.

“The passing away of a legendary movie star whose invaluable contribution to Philippine cinema is beyond compare and whose sincerity, warmth, guidance, and kindness had truly touched the hearts of her fellow workers in the film industry sector, particularly the young actors and actresses who have just began their movie careers, will be mourned by the Filipino people and the nation,” said Sotto.

The Senate is expected to adopt this resolution when it reopens session this week.

Senator-elect Raffy Tulfo and his wife ACT-CIS Representative Jocelyn Tulfo are also pushing to nominate Roces to be recognized posthumously as a National Artist, just like her husband.

Poe thanked her colleagues for suggesting to honor her late mother this way.

(She truly is an artist, and not only that, an artist who I think showed a good example… It’s is now up to those in power to give this to her or not. But in the hearts of many of our countrymen, they would remember her as someone with integrity, someone who is calm but who would not back down from any fight.)

Roces’ wake is currently being held at the Heritage Memorial Park in Taguig City. Public viewing will run from Sunday until Tuesday, May 24, from 10 am to 10 pm. Minimum health protocols will be strictly observed. – Rappler.com