Locsin wants termination of deals with Chinese firms on US blacklist 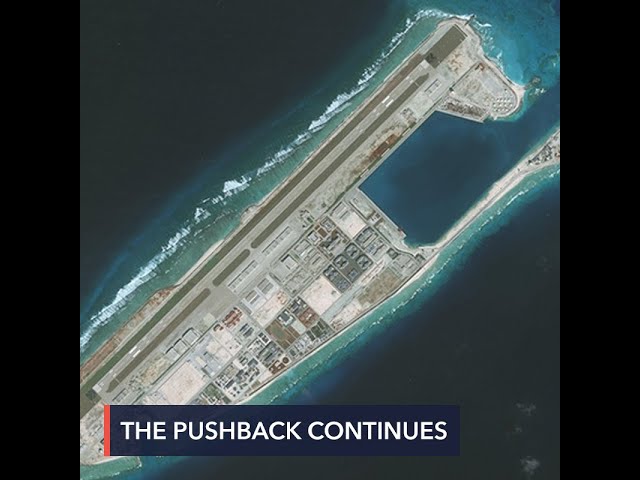 Facebook Twitter Copy URL
Copied
(3rd UPDATE) 'If I find that any of those companies are doing business with us, then I would strongly recommend that we terminate the relationship with that company,' says Foreign Secretary Teodoro Locsin Jr

Foreign Secretary Teodoro Locsin Jr said on Friday, August 28, that he would “strongly recommend” the termination of local contracts with Chinese firms blacklisted in the United States for island-building in the South China Sea.

Locsin made the statement on CNN Philippines’ The Source when asked what steps the Philippines would take following the recent move of the US to sanction 24 Chinese companies involved in the Chinese military’s construct of artificial islands in the disputed area.

“If I find that any of those companies are doing business with us, then I would strongly recommend that we terminate the relationship with that company,” Locsin said.

The foreign affairs chief said he would coordinate with other national agencies to check on ongoing projects and contracts, and if there are Chinese firms  “in any way involved in the reclamation then it becomes consistent on our part to terminate any contract with them.”

“Of course since the contract was already entered into they could sue us on that but…I’m very careful about validating anything that China does by inaction,” Locsin added.

Are there Philippine contracts?

Among the companies included in the US’ Entity List are several subsidiaries of China Construction & Communications Corporation (CCCC). CCCC was reported to have been involved in China’s reclamation of maritime features in the South China Sea, and its construction of military bases on features that were part of Southeast Asian states’ exclusive economic zones, including the Philippines.

CCCC’s operations were also shown to have led to massive environmental damage in some of the world’s richest fishing grounds.

CCCC has been awarded at least one Philippine contract for the construction of an international airport in Sangley Point, Cavite. The firm has a partnership with tycoon Lucio Tan’s MacroAsia Corporation for the P500-billion project.

Prospective bidders for the airport project had supposedly backed out after bidding documents showed “subjective criteria” and a “rushed” selection process would take place for the venture, according to an Inquirer report.

Even before the US sanctioned CCCC, the company was already blacklisted by the World Bank from 2011 to 2017 over “fraudulent practices,” which included fraudulent bidding schemes. (READ: ‘Shady track records’ hound PH-China infra firms) In an interview on ANC, Cavite Governor Jonvic Remulla said he would leave it up to President Rodrigo Duterte and key security officials to guide the local government on how it would proceed.

“If the President says, if the Department of National Defense says it is a security risk to enter the agreement with them then we will terminate the agreements immediately. These things…we have to have the national government chime in on it and have their own risk assessment on what’s going on,” he said.

Remulla added the joint venture between CCCC and MacroAsia was “about to be completed” but was not perfected yet.

Locsin’s statements are the latest in a series of pronouncements he had made that are seen to strengthen the Philippines’ posture in the South China Sea amid the Duterte administration’s pivot to China.

A few days before, Locsin issued rare remarks explicitly saying that the Philippines will invoke its 1951 Mutual Defense Treaty with the US if China attacks a Philippine naval vessel in the South China Sea.

The country’s top diplomat repeated this on Friday, calling it the Philippines’ “greatest assurance of national defense.”

“I will not brook any violation of my territory. It’s as simple as that,” Locsin said.

“Kudos to DFA Secretary Teddy Boy Locsin for putting the Chinese Foreign Ministry spokesman in his place. Banning us from sending our military aircraft into airspace near Panatag Shoal surely deserves a strong rebuke. I’m proud that our top foreign policy implementor did it,” he said.

“China’s display of arrogance by accusing us of infringing on its sovereignty and security by sending military aircraft into airspace adjacent to Panatag Shoal/Bajo de Masinloc, urging the Philippines to immediately stop illegal provocations, tops it all,” he added. – Rappler.com