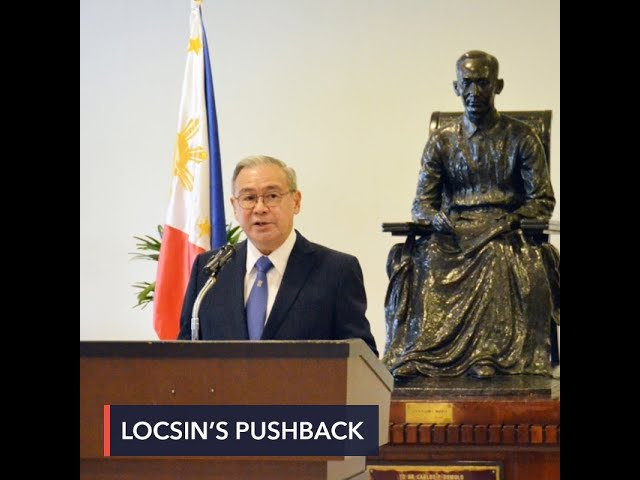 Facebook Twitter Copy URL
Copied
‘There is no kowtowing’ to China,' asserts Foreign Secretary Teodoro Locsin Jr as he maintains the Philippines's continued patrols in the West Philippine Sea

This is a rare – if not the first – instance when the Duterte government explicitly said it would invoke the Philippines-US Mutual Defense Treaty in response to China’s posturing in the disputed waters. This statement – coming from America’s oldest ally in Asia which had pivoted to Beijing under the current leadership – further fuels a looming Cold War between the Philippines and China.

“Unless something happens, as I said before, that is beyond incursion and in fact is an attack on, say, a Philippine vessel, in which case then I call up Washington DC,” Locsin said on Wednesday, August 26, during an interview on ABS-CBN News Channel’s Headstart.

This is possible under the Mutual Defense Treaty, a security pact signed in 1951, where both sides commit to defend one another in case of an attack.

In March 2019, US State Secretary Mike Pompeo made it clear that the defense pact covered the South China Sea, citing any armed attack on Philippine forces or public vessels in the area will trigger mutual defense obligations. Asked under what circumstances the Philippines would call on the US, Locsin declined to cite specifics, saying “I will not discuss that because the essence of deference theory is uncertainty.”

“As a diplomat, I can tell you I don’t foreclose any means to protect the sovereignty and freedom of my country and that includes the worst,” he added.

Locsin’s remarks come amid the intensifying power play between Washington and Beijing, where the South China Sea is a major friction point.

The Philippine top diplomat’s explicit statement it would call on the country’s oldest ally was likewise a first under the Duterte administration, whose “independent foreign policy” has been characterized as veering away from the US toward China.

It’s also the latest in a series of increasingly assertive remarks that firm up Manila’s posture in the territorial dispute.

In recent months, Locsin had doubled down on the Philippines’ position in the West Philippine Sea, as he cited the historic 2016 Hague ruling as a “non-negotiable” and issued a rare warning of “severest consequences” if China’s military drills in the South China spilled into Philippine territory.

During the interview on Wednesday, Locsin made it clear that “it benefits the Philippine interests that we have a US presence in the region.”

“I’ve said that very clearly. It is the same as the presence of Great Britain of the European coast in the old days of balance of power. Again, we have a balance of power situation. Yes, we need the US presence in Asia,” he said.

South China Sea: After all its posturing, the US is struggling to build a coalition against China ‘There is no kowtowing’

In the meantime, Locsin asserted that the country would not stop its patrols in the West Philippine Sea which China repeatedly described as “illegal provocations.”

“We are going to continue patrolling because it’s ours. That’s all there is to it…. They will continue to call it illegal provocations but that’s their right. It’s a free world,” he said.

Locsin vowed “there is no kowtowing” to China under his leadership.

Locsin’s statements are a departure from President Rodrigo Duterte’s repeated claim the country cannot regain “property” that is “in possession” by China in the West Philippine Sea as this would only lead to “war.”

“We have to go to war and I cannot afford it. Maybe some other president can but I cannot…. Inutil ako diyan (I’m useless there) and I’m willing to admit it,” Duterte said in his 5th State of the Nation Address in July.

Duterte’s war claim has been debunked by several experts on the West Philippine Sea, including retired Supreme Court senior associate justice Antonio Carpio who had earlier called it a “hollow attempt to scare our people into submission to China.”

On the Mutual Defense Treaty, Carpio earlier said the security pact “operates only for self-defense, not for aggression against another state.”– Rappler.com