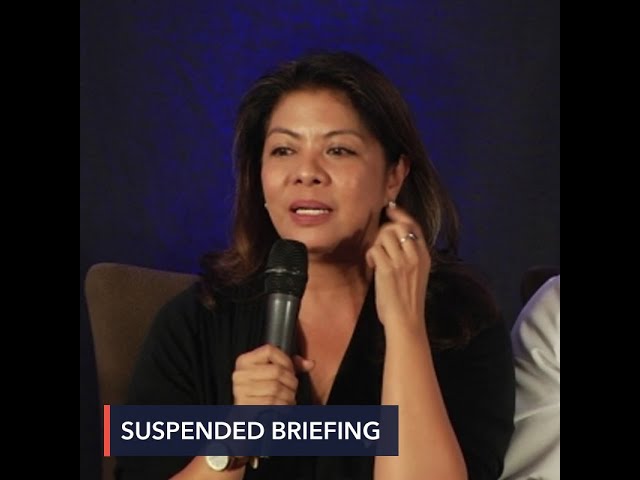 (We have to make sure this undersecretary responds to these concerns under oath. I am moving to suspend the briefing of the budget of the PCOO.)

The PCOO’s budget hearing is now “suspended until further notice.”

The delay in their budget approval is in stark contrast to the quick approval of the budgets of other executive agencies. So far, house committees have approved the proposed budgets of departments after one meeting.

This is not the first time that a PCOO budget was endangered by the doings of its officials. In 2018, the absence of controversial assistant secretary Mocha Uson from proceedings annoyed lawmakers so much that they deferred plenary deliberations on the PCOO budget.

‘Unacceptable’ use of power

Castro and Zarate showed the participants of the hearing some Facebook posts of Badoy where she accused them of being high-level members of the Communist Party of the Philippines and of giving orders to its armed wing, the New People’s Army. (READ: [OPINION]: Lorraine Badoy’s world)

Zarate said it is insulting that Badoy and the rest of PCOO and its attached agencies are now asking the House of Representatives to approve their P1.59 billion budget for 2021. The budget is lower than the P1.69 billion this year.

“Kung ganun-ganun na lang pong mag-aakusa itong isang unelected official na ito sa mga halal ng bayan at humihingi sila ng budget dito, then Mr Chair, we cannot allow that. This is not only an affront to us, but I think this is an affront to the institution.”

Zarate also blasted Badoy for saying they are not real lawmakers, when they won their seats in the lower house through a generally clean election.

“I take offense that she is using her position, using government funds, to attack to attack our person and encourage the trolls to attack not only our person but even our family,” said an incensed Zarate.

He reminded the PCOO that the labeling of someone as a communist or terrorist could lead to physical harm and even death of the person being tagged.

Zarate cited as an example Zara Alvarez, a 39-year-old activist who was shot in Bacolod City last August 17. She was among the 600 people the Duterte government wanted to formally declare as terrorists, a list which was eventually trimmed down to two after the Department of Justice said the initial list was unverified.

“She (Alvarez) was shot. ‘Yung mukha niya nasa tarpaulin, rined-tag, and you cannot just say, Ms Badoy, na walang implication at walang mangyayari sa rinered-tag ninyo and you have to be responsible for your postings,” said Zarate.

(Her face was displayed in a tarpaulin, red-tagged, and you cannot just say, Ms Badoy, that nothing will happen to people you red-tag and you have to be responsible for your postings.)

Badoy, who was physically present at the hearing along with Castro and Zarate, did not speak during the meeting.

But her boss, PCOO Secretary Martin Andanar, was asked to respond to the concerns.

Andanar disowned Badoy’s social media posts, saying they were not official positions or statements by PCOO.

The PCOO chief pleaded lawmakers not to let Badoy’s posts affect his agency’s entire budget, especially amid the COVID-19 pandemic.

“Whatever our esteemed Undersecretary Badoy, that is her own post on her page and that should not affect the rest of the PCOO budget, including the agencies’ budget… This is for the PCOO to be able to disseminate information, especially now during the time of the pandemic,” said Andanar.

“I cannot imagine not having any budget to help the national government, every Filipino, to disseminate the correct, the right information, to avoid COVID-19,” continued Andanar.

He also attempted to persuade lawmakers that the PCOO has nothing to do with NTF-ELCAC (National Task Force on Ending Local Communist Armed Conflict), the group of which Badoy is spokesperson and which has also been accused of red-tagging.

“The NTF-ELCAC, they have their own office. The NTF-ELCAC also creates their own content but it is not distributed in the PCOO as a platform,” said Andanar.

However, PCOO’s official social media pages have crossposted content from NTF-ELCAC’s pages, including posts that red-tag media outfits and journalists.

It was only in early May when Andanar, feeling the backlash from these posts, limited the kind of content that can be crossposted on PCOO pages.

Also, PCOO itself is a member of the Strategic Communications cluster of the NTF-ELCAC, as admitted by News and Information Bureau chief Gigi Agtay in a budget hearing last year.

The P1.59 billion proposed budget is broken down as follows:

The PCOO proper budget shrunk by 5% compared to its budget in the 2020 General Appropiations Act. There were also decreases in the PIA’s budget, by 18%, and the RTVM budget, by 21%.

Meanwhile, government corporations attached to the PCOO have the following proposed 2021 subsidies: