Tension rises at the Manila City Hall as people are told to leave the building after a shooting incident at the chamber of Branch 45 RTC Judge Maria Teresa Abadilla on Wednesday, November 11, 2020.

Facebook Twitter Copy URL
Copied
(7TH UPDATE) Witnesses say the suspect clerk of court contracted coronavirus, and was 'uneasy and shuddering' when called to a meeting by the judge 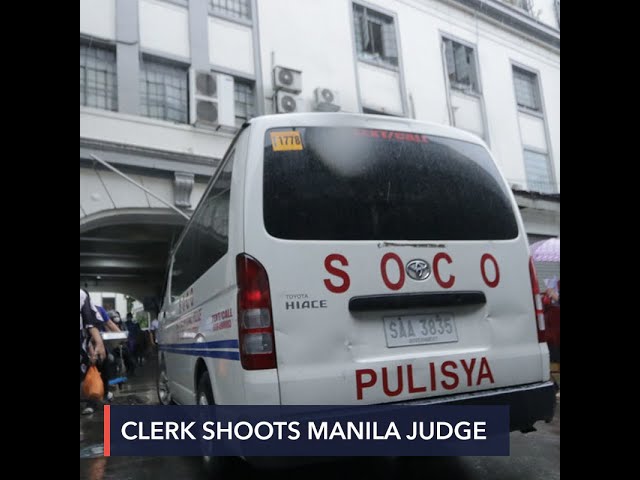 Manila Regional Trial Court (RTC) Branch 45 Judge Ma Theresa Abadilla was shot by her clerk of court inside her own chamber in the Manila City Hall on Wednesday, November 11.

An initial report by the MPD said Abadilla, 44, was rushed to the Manila Medical Center where doctors declared she was “dead on arrival at 3:15 pm.”

Recovered at the crime scene was a caliber 9mm pistol loaded with 12 bullets, as well as two empty shells believed to be from the same gun.

The report said the shooting happened around 2:45 pm inside Rm 535, 5th floor of the Manila City Hall.

“It appears that on said date and time, said victim and suspect while inside the office of the said Judge Samonte (Abadilla), witness heard a gunshot,” said a initial report by the MPD.

Abadilla is the 8th judge to be killed since the Duterte administration in 2016, the 51st in the legal profession.

Before becoming a judge, Abadilla worked in the Supreme Court in the offices of retired justices Lucas Bersamin and Teresita Leonardo-De Castro.

In a statement, Bersamin said: “She was a hardworking judge. Her death, which was senseless, diminishes us all.”

Chief Justice Diosdado Peralta said “although there are currently security protocols in place in all our courthouses, I have directed the Court Administrator to employ stricter measures to prevent incidents like these from happening again.”

“The passing of Judge Abadilla is indeed a big loss to the judiciary because I personally know her to be an upright and highly competent magistrate,” said Peralta in a statement Wednesday night.

In a report sent to Mayor Isko Moreno by Manila City Hall’s security chief Lieutenant Colonel Arsenio Riparip, a witness said Rebato had contracted the coronavirus and planned to resign.

Abadilla called Rebato for a meeting (Wednesday) “with regards to the performance of the latter which seems unfavorable,” said Riparip’s report.

Riparip’s report added: “Before the said shooting incident happened, Atty Rebato was seen feeling uneasy and shuddering while being questioned by Judge Abadilla and without hesitation, he shot her at point blank range to the head.”

Abadilla was the daughter of the late Colonel Rolando Abadilla, former chief of the Military Intelligence and Security Group of the defunct Philippine Constabulary’s Metropolitan Command during the Martial Law years. – Rappler.com