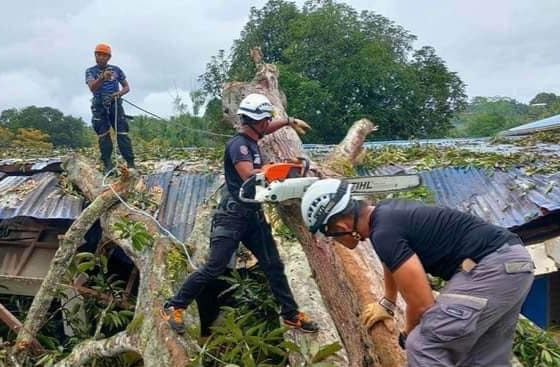 DAMAGED. Workers remove parts of a tree which fell on a public elementary school building in the village of Matiao in Mati City on Wednesday, January 25.

Department of the Interior and Local Government (DILG) provincial director Orly Cabaobao said heavy rain, which had been pounding parts of the province since Wednesday, January 25, caused flooding and landslides.

The state weather bureau Philippine Atmospheric, Geophysical and Astronomical Services Administration (PAGASA) issued an advisory at 11 am on Thursday warning of a low-pressure area (LPA) that could cause downpours of up to 75,000 drums per square kilometer in parts of Camiguin Island, Surigao del Norte, Siargao Island, and the Dinagat Islands.

PAGASA, however, also warned that inclement weather would be experienced across several regions in Mindanao.

The province has started seeing widespread flooding. For instance, the Davao Oriental Provincial Disaster Risk Reduction and Management Office said flood waters hit the village of Mahan-ub in the coastal town of Baganga on Wednesday.

The Philippine Institute of Volcanology and Seismology (Phivolcs) warned of an imminent landslide in the village of Dadong in the town of Tarragona in Davao Oriental.

Phivolcs said a community in Tarragona was facing the risk of being buried in a landslide unless the heavy rain stopped, and advised local officials to prepare to evacuate families.

Meanwhile, all classes in public schools in the Caraga region’s provinces of Surigao del Norte, Surigao City, and Siargao Islands were suspended by the Department of Education (DepEd) due to bad weather, said Gilbert Gonzales, the head for operations the Provincial Disaster Risk Reduction and Management Office.– Rappler.com